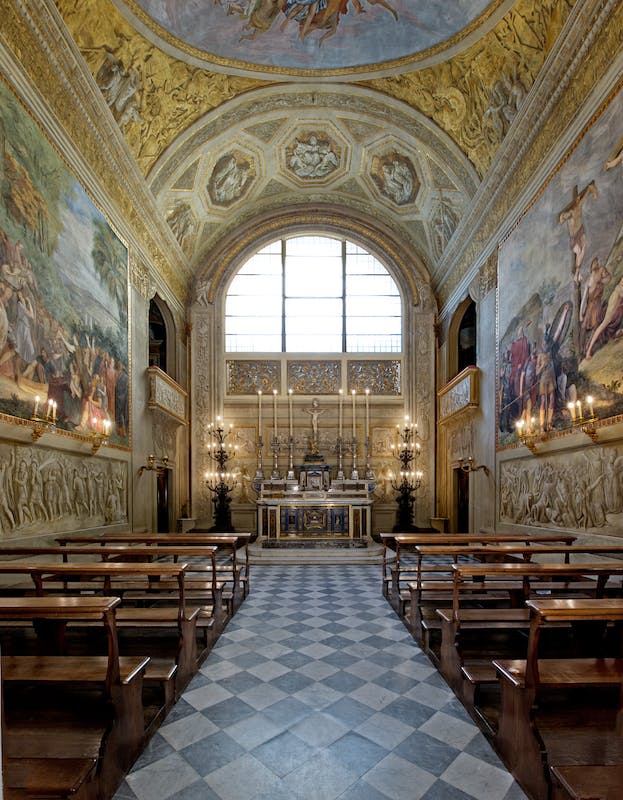 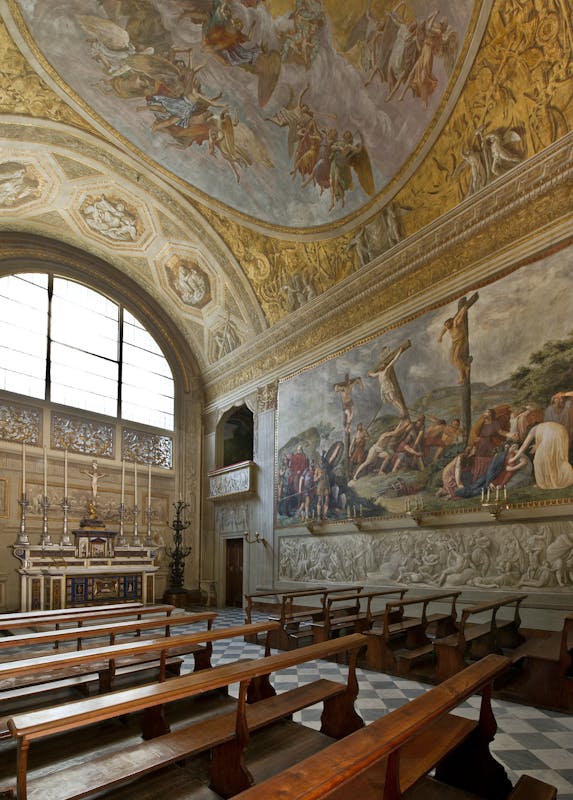 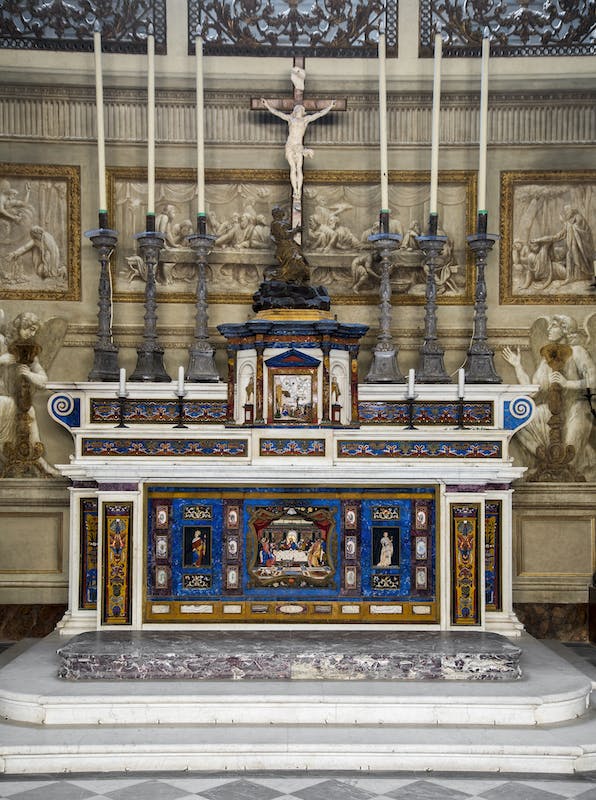 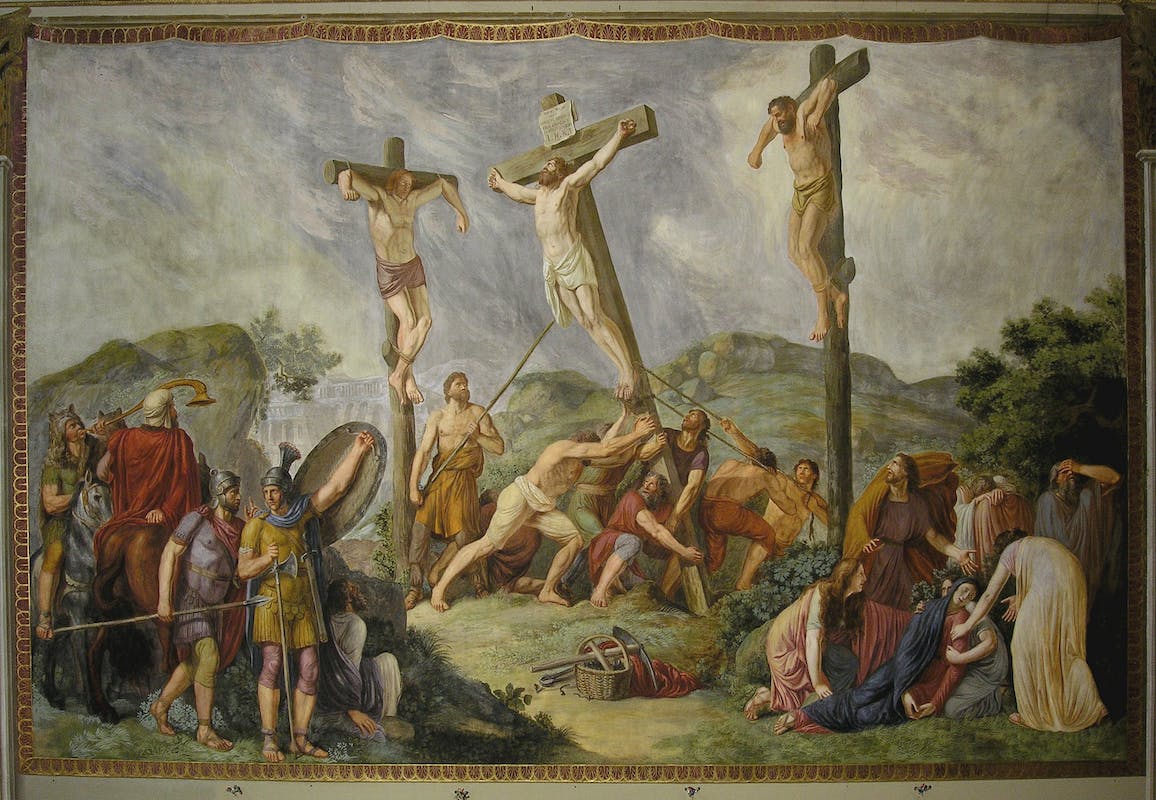 The Palatine Chapel was originally a large environment forming part of the suites used as dining rooms that Bartolomeo Ammannati created on the ground floor of the Palace, completed in 1575. Later, it was enhanced by precious vestments and used firstly as a reception room, then as a lounge for the Foreign Princes (1658) When Cosimo III married Marguerite Louise d’Orléans (1661), the suite was renovated and used as a residence for the “Wedded Royals”. On this occasion, the rooms were decorated with frescoes by Jacopo Chiavistelli featuring subjects and architectures we can only imagine today. However, according to the descriptions of the time, they portrayed Cosimo’s challenge and Apollo’s cart, among allegories of day and night on the vault, the months of the year and the zodiac signs, alternating with backgrounds of architecture on the main walls and the weapons of the Medici and the Orleans family on the smaller walls.

The space was radically transformed following the arrival of Leopold II in Florence (1765), who decided to turn the hall into a chapel. The renovation project was assigned to architects Ruggeri and Paoletti, who created stages for the court and musicians, opened up the great arched window that replaced the original ones and added choirs to the opposite side. A small choir for the rulers was built to the right of the altar, while a space for hosting ladies was carved out of the wall behind the altar. Finally, painter Vincenzo Meucci changed the iconographic content of Chiavistelli’s frescoes with a few retouches, transforming it from profane to sacred. The design included three wooden altars that were replaced by a single altar in 1785, designed by painter Santi Pacini. The new altar was made with parts of the altar destined for the Cappella dei Principi in San Lorenzo, which was never finished. These parts included two very interesting panels, created using the semi-precious stone mosaic technique and attributed to Ludovico Cigoli. The first one constitutes the door of the ciborium, and represents “The Adoration of the Magi”, while the second one depicts “The Last Supper” and it is positioned in the center of the frontal. Both panels are set in splendid frames of white marble and golden bronze featuring jaspers, pearls, chalcedonies, quartz, amethysts and lapis lazuli.  All traces of the holy silver elements that once decorated the dining room were lost during the French reign. However, the silver and gold wooden ‘baldachin’ added in 1793 still stands in the same spot to this day.

Ferdinand III succeeded Leopold II, and between 1791 and 1792, he completely changed the decorative layout of the chapel. This operation endowed the chapel with its current shapes, based on the design by Bernardo Fallani. The choirs were enhanced by adding two columns of alabaster from Montalcino, while the two central doors of the main walls were closed to make space for the new fresco decorations created by Luigi Ademollo.  The artist also painted the frescoes on the vault and the decorations on the choirs and small choirs, portraying “various events in the life of Jesus Christ’s” with strikingly scenographic characteristics (the “Crucifixion” on the wall to the right of the altar and “Palm Sunday” on the wall to the left). Ademollo completed the decoration of the Chapel when Ferdinand III returned to Florence – he decorated the left-hand choir in the chapel, built in 1823.

Entering one of the most captivating premises of Pitti Palace