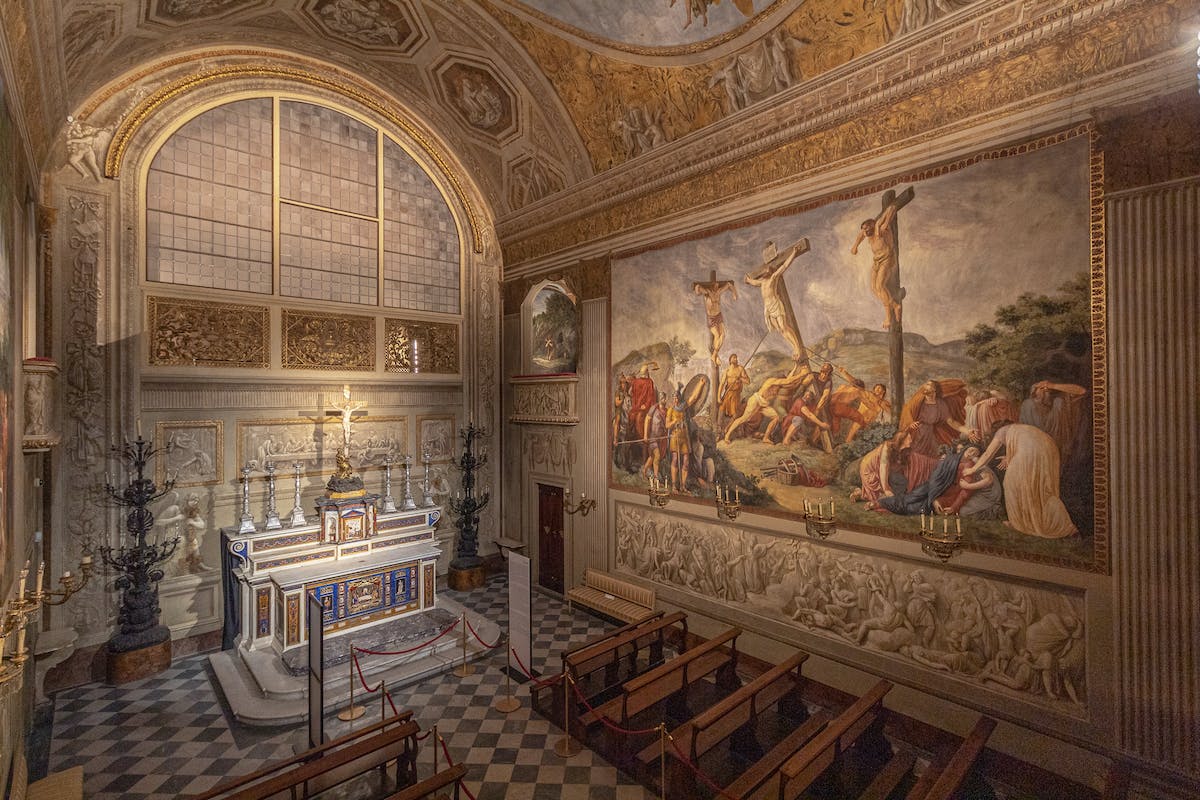 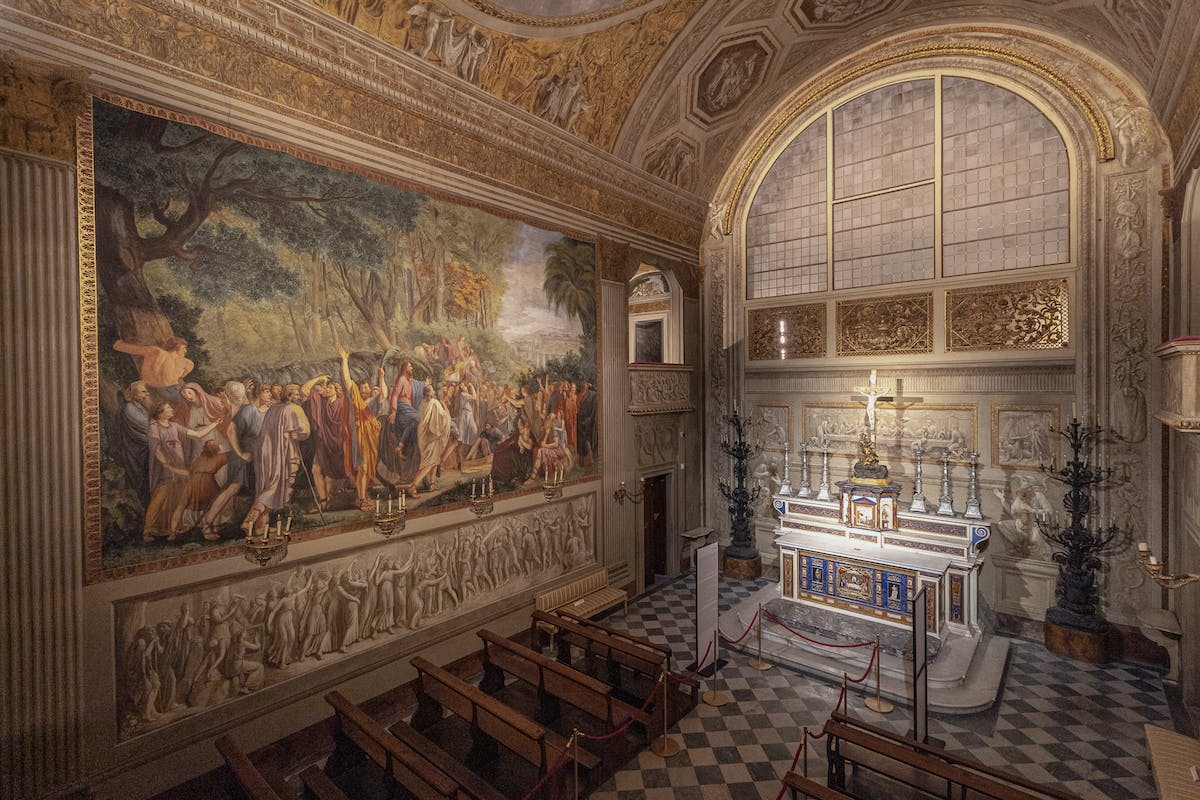 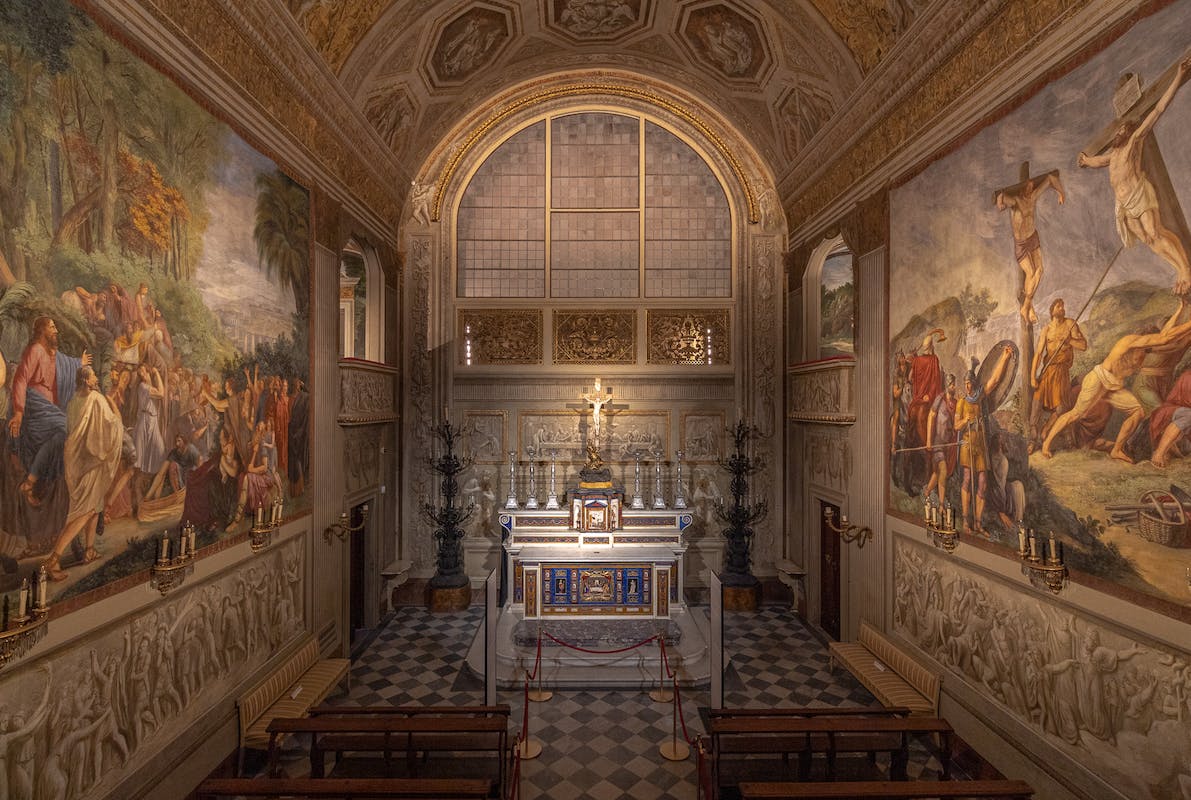 At the end of the 18th century, Francesco Maria Antonio Luigi Adamolli, known as Luigi Ademollo (Milan 1764 - Florence 1849), a Lombard painter who became famous in Florence for having painted the stage of the Teatro della Pergola, was appointed by the Grand Ducal government to decorate the first floor of the Pitti Palace, the result of the rational adaptation of the Apollo Room, dating back to the time of Cosimo III and transformed by the House of Lorraine into the Palatine Chapel.

The intervention took place at two different times, separated by a long interval: the first phase lasted from 1791 to 1793, when he completed most of the rooms: the antechamber dedicated to Old Testament subjects, such as the Prophets and the Caryatids in imitation bronze and the cloister vault with Noah's Ark, the chapel itself with a barrel vault where the Assumption of the Virgin is painted, the side walls where the two imitation tapestries with scenes from the New Testament stand out like paintings, framed by a motif of acanthus leaves, and finally the monochromes of the choir stalls and the right choir loft, destined for the Sovereigns, a precious casket where peaceful depictions of the Penitent Magdalene and the Shepherdess at the Spring stand out against Arcadian landscapes.

The work carried out by the Milanese painter during the first period of his Florentine stay attempted to surpass the formal late-baroque stylistic canons, at the same time grafting into the Tuscan artistic panorama suggestions taken from ancient bas-reliefs, from the Mannerist-Michelangelesque tradition and from neoclassical figurative elements of Lombardy style, whose precedent had been the decorative enterprises of the brothers Giocondo and Grato Albertolli, dating from 1771 onwards and created during the Grand Duchy of Pietro Leopoldo, in the rooms of the villa of Poggio Imperiale, the Uffizi and the Pitti Palace. Not by chance, Luigi Ademollo had attended the course of Ornamentation held by Giocondo Albertolli at the Brera Academy, and elements of the Lombard master’s antiquarian taste flowed into the decorations he created for the Palatine Chapel: in particular, he added caryatids, sirens, mixtilinear interlacing of panoplies, festoons in the antique style and phytomorphic elements, following an antiquarian style that favored the renewal of the Grand Duchy of Tuscany’s decorative taste.

The second decorative phase of the Palatine Chapel was not completed until the end of the Napoleonic reign and the restoration of the Habsburg-Lorraine sovereignty, when Luigi Ademollo, already engaged in the pictorial cycles of the main floor of the Pitti Palace, was called again to realize the paintings for the left choir loft between 1822 and 1823. He was again appointed by Ferdinand III himself who, having returned after 15 years of exile in Florence, still had great faith in his court painter, holding him in the same high esteem. In this second decorative tranche, the rigorous and severe classicism, reminiscent of the painting by Frenchman Jacques-Louis David, gives way to a sacred painting updated to reflect the work of the 15th century Florentine painters, in line with the results of the contemporary purist currents.

An interesting note concerns the experimentation of distinct painting techniques in the same decorative cycle of the Palatine Chapel, which emerged from the 2011 restoration: Ademollo worked mainly in fresco with pigments diluted in lime white, in the largest spaces of the environment, such as vaults, wall lunettes and longitudinal walls, while in the two choir lofts he experimented with a sort of encaustic tempera painting. This consisted in applying a preparatory smooth layer of plaster and glue to the wall surface, then painting on top of this with colors mixed with organic binders, probably egg and oil, before applying a final coat of wax on top of the paintings. In 1834, Ademollo supervised the cleaning of his decorations, blackened by smoke from incense and candles.