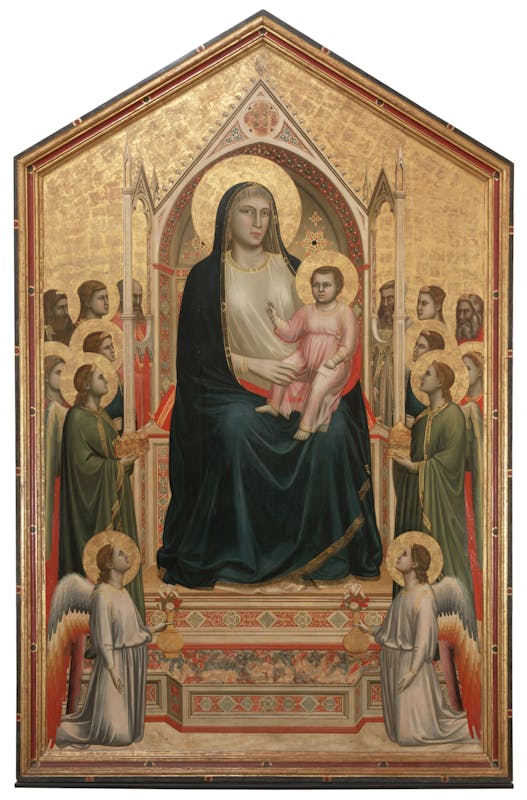 Mary, holding Jesus in her arms, is seated on a throne, like a queen. This is the iconography that gives rise to the title “Maestà” or “Majesty”, used to refer to this and other paintings with similar subjects.

The Virgin is holding the Child, who is giving a blessing with his right hand, while in his left, he holds a rolled scroll, symbolizing knowledge. Around the throne is a pointed tabernacle, inlaid with different-coloured marble, reminiscent of the Gothic architecture that was fashionable in the 1300s. Inside this tabernacle is a group of saints and angels. The angels, who are kneeling at the foot of the throne, offer vases of roses and lilies, a reference to purity and charity, while the ones to the side of the throne are holding out a crown and a pyx, a religious item that likely refers to the Passion of Christ. The saints are partly covered by the architecture and halos, which as well as suggesting the existence of a solid space in which the figures have been placed, serve also to evoke the name of the church for which the painting was created: Ognissanti in Florence.

The original position of the painting inside the church is unknown, but it is possible that it was hung over a side altar or on a partition dividing the secular space from the choir of the Humiliati monks who officiated in the church. Giotto continued to work for Ognissanti during his career, painting at least two more works.

Painted when the artist was already extremely well known and greatly in demand all over Italy, the masterpiece stands out for the naturalism with which it develops this traditional subject. The decorative elements on the clothing are reduced to a minimum to bring out the full plastic nature of the bodies, which are shaped by light and shade. For over a century, this composition was a model of inspiration for Florentine painters.

Mary, holding Jesus in her arms, is seated on a throne, like a queen. This is the iconography that gives rise to the title “Maestà” or “Majesty”, u...