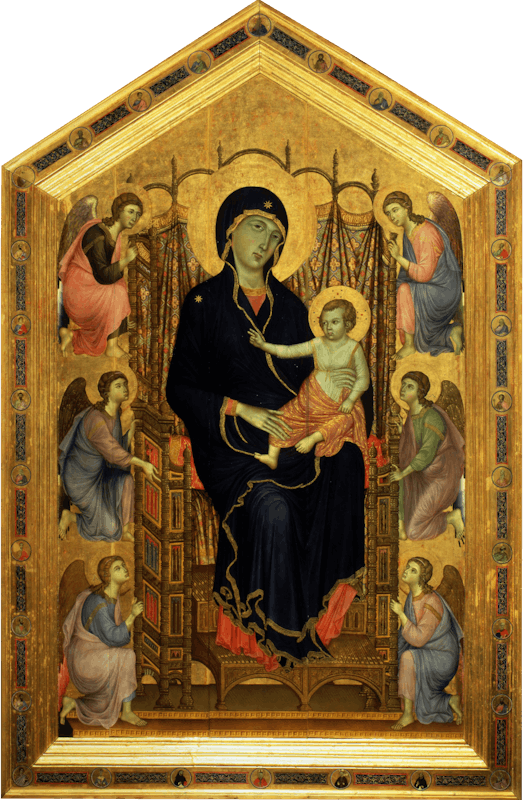 This work, the largest painting on wood from the 13th  century known to date, was commissioned to Sienese painter, Duccio di Buoninsegna in 1285 by Florentine confraternity Compagnia dei Laudesi, a community that met in the church of Santa Maria Novella in Florence to sing the praises of the Virgin.

Mary is seated on a richly carved wooden throne, her shoulders covered by a banner, symbolising her honour and status. On her knees sits the Christ Child, dressed in traditional ancient robes, with a rich red cloth, woven with gold, around his hips. He is giving a blessing with his right hand. The throne is being held by six kneeling angels who seem to be suspended in the void, giving the impressions that this is a sudden apparition of the holy image before the worshippers. The foreshortened representation of the throne and the slightly sideways position of the Virgin, are expedients frequently used by 13th-century painters to add a certain spatial depth to compositions. The frame of the painting is decorated with roundels containing small figures of saints. At the bottom it is possible to recognise - thanks to the black and white dress of the Dominican friars - the founder of the Dominican order and St. Peter Martyr, as well as saints from the Dominicans who officiated over the church of Santa Maria Novella.

This is one of the oldest and best known works by Duccio di Buoninsegna who, in the early 1280s, most likely worked alongside Florentine painter Cimabue.  Alongside formal elements taken from Byzantine traditions, such as the gold lettering on the Christ Child’s cloak and the signs used to construct the anatomies of the faces, Duccio also reveals his sensitivity to the naturalism and elegance of Gothic art, as can be seen in the distribution of light and shade, in the draped fabrics, and in the wavy, undulating movements of the borders.

The name ‘Rucellai Madonna’, by which the painting is known, comes from the chapel in which it was hung at the end of the 16th century, owned by the Rucellai family.