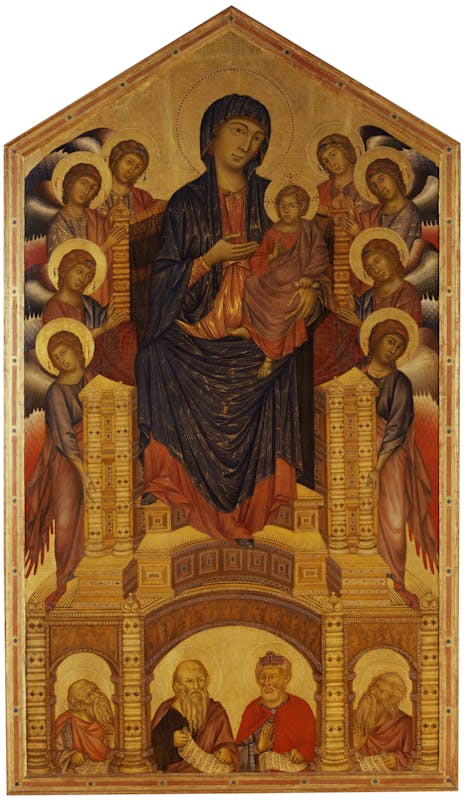 The painting originally hung in the Vallombrosians church of Santa Trinita in Florence and since the 16th century it has been recorded as the work of Cimabue, Florence’s most important 13th-century painter who, as well as working in Tuscany, was also present in Rome, Assisi and Bologna.

Seated on a grand, imposing ivory throne, with an articulated architectural form, the Virgin Mary is using her right hand to point to her son, whom she is holding, according to the Byzantine model of the Virgin Hodegetria, i.e. he who shows the way to salvation. Dressed like a philosopher from ancient times, Jesus is blessing and holding a rolled scroll, which is perhaps the scroll of the Law. The clothes worn by Mary and her son feature a precious golden decoration known as damascene, a characteristic of traditional Byzantine painting, which was greatly fashionable in Italian medieval painting. Around them are eight angels with splendid multi-coloured wings, gently raising the throne. What is rather unusual for the iconography of the Virgin and Child enthroned  is the depiction, under the throne, of several prophets from the Old Testament (left to right: Jeremiah, Abraham, David and Isaiah) who are holding phylacteries with writings from the Holy Scriptures, alluding to the mysteries of the Incarnation and Virginity of Mary.

The painting stands out for the boldly elegant decorations, also seen on the background, which is finely decorated with geometric motifs engraved into the gold. Although the dates of this work have been the subject of much discussion, there is a tendency to date the Santa Trinita Maestà to the latter part of Cimabue’s career. In this masterpiece,  the complex division of space used for the throne, the folds of the clothing, the modulation of chiaroscuro and the good-natured expressions of the Virgin and the angels seem to be affected by the naturalism distinguishing younger artists, such as Duccio di Buoninsegna and, above all, Cimabue’s own pupil, Giotto.