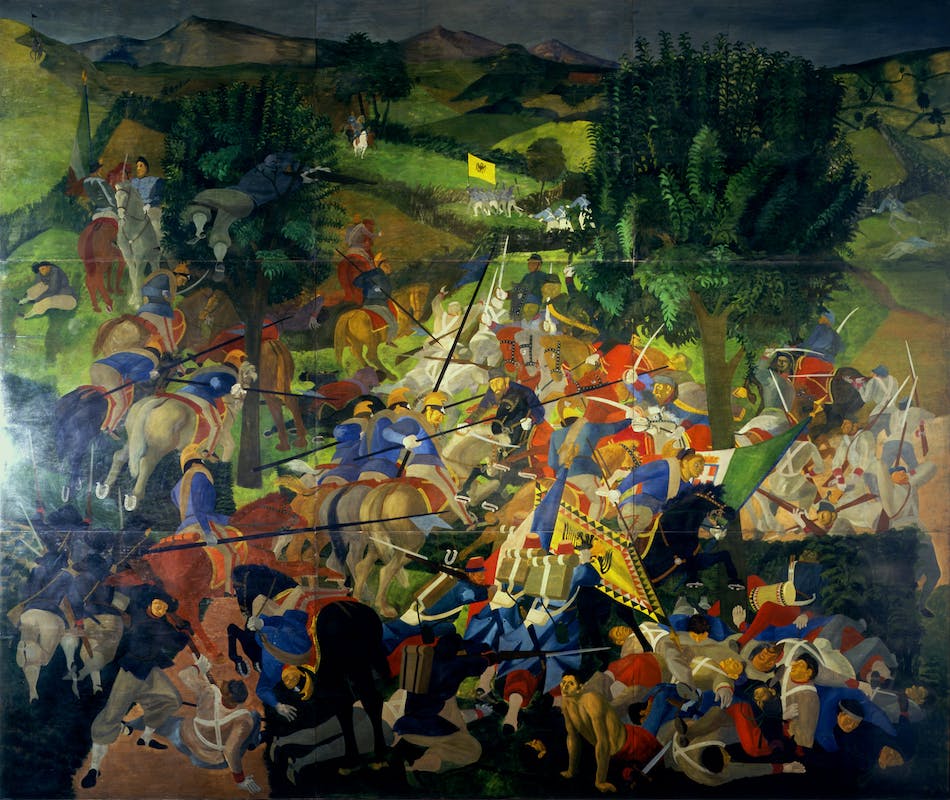 On a plateau near San Martino, a short distance from Lake Garda, the final battle of the Second War of Independence was fought: in a fierce exchange, the Piedmont army directed by King Vittorio Emanuele and supported by the French troops of Napoleon III, defeated the Austrian forces commanded by Emperor Franz Joseph I. It was a founding moment of the Italian Risorgimento, the period leading to unification, and is symbolically considered as the first step leading to the formation of the new state of Italy.

In his studio in Rome in 1936, right in the middle of the Fascist regime, Corrado Cagli painted nine paintings in quick succession, the speed a prerequisite of his chosen medium of fast-drying encaustic tempera. With the help of his friend, the sculptor Mirko Basaldella, the paintings were then assembled in Milan on the back wall of the Sala delle Priorità Italiche, designed by the BBPR studio for the Palazzo dell'Arte, home of Milan’s VI International Triennale. The Triennale Directorate had requested a theme of historic patriotism; thanks to Sironi’s intervention, Cagli obtained permission to develop his work without submitting a draft to the Directorate, thus avoiding any censorship. This was how this representation of the Risorgimento battle was offered as the ideal subject to celebrate high moral and civil values: “I deliberately chose a theme linked to the history of the Italian Risorgimento [...]: it was a kind of antidote to the poison of the fascist rhetoric” (Cagli, 1967).

The scene, depicted from a bird's eye persective, with the hectic confusion of weapons, horses, infantry and knights crushed together amid the surrounding hillsides, clearly highlights Cagli's relationship with traditional painting styles, with influences ranging from Paolo Uccello to Piero della Francesca.

Owned by Francesco Muzzi, secretary of the Cagli Foundation, and graciously loaned to the Uffizi in 1978, it was finally donated to the Gallery in 2003. From 1982 it was exhibited at the former church of San Pier Scheraggio in meaningful and elegant juxtaposition with the “Battle of Ponte dell'Ammiraglio”, the masterpiece by Renato Guttuso which was acquired by the Gallery in 2005.

The Resistance in Art