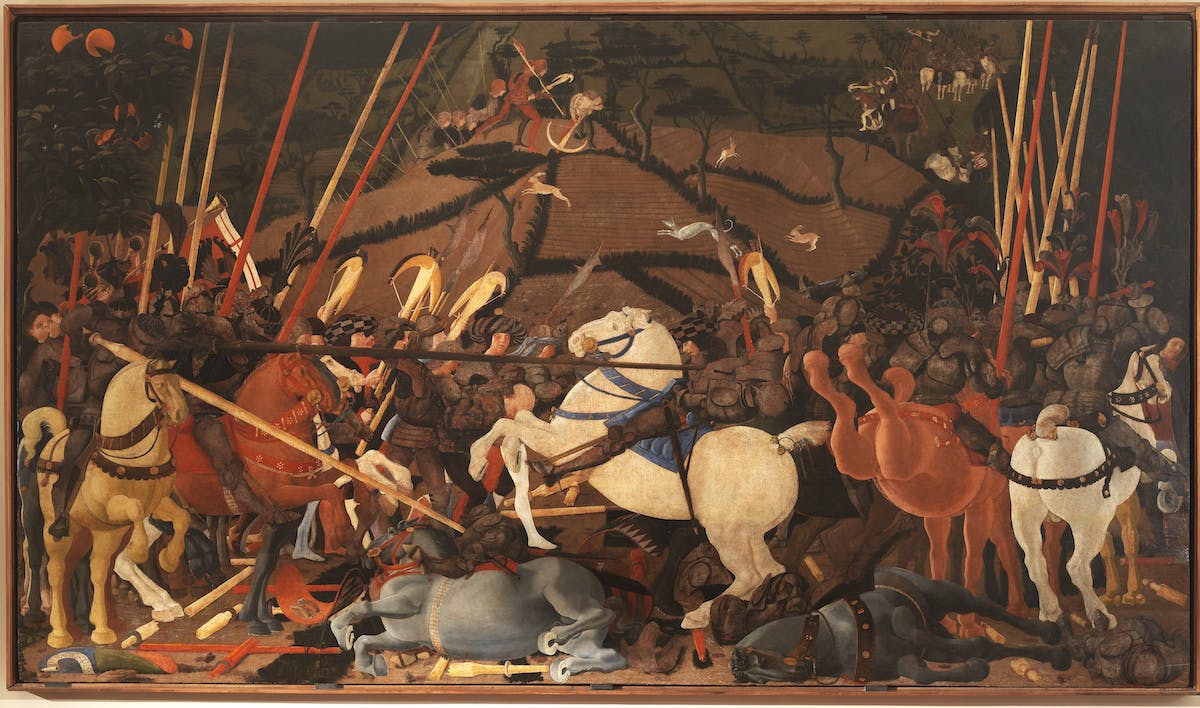 This panel is part of a cycle of three paintings that celebrate the victory of the Florentine forces over the Sienese troops and the alliance guided by the Duke of Milan at the battle of San Romano (Pisa) in 1432. Niccolò da Tolentino, at the head of the Florentine army, is shown as he unseats Bernardino della Carda, the head of the adversary troops, with his lance while the battle is raging all around. The direction of the lances and crossbows, with those of the Florentine forces slightly angled forwards and those of the adversaries slightly set back, foreshadows the outcome of the battle. The Uffizi panel is the central episode of the narrative sequence that begins with Niccolò da Tolentino leading the Florentine forces, in the painting now at the National Gallery in London, and  concluding with the Attack of Michelotto da Cotignola, ally of the Florentines army, illustrated on the panel now at the Louvre Museum in Paris. The decorative cycle was commissioned by Lionardo Bartolini Salimbeni, leading light in Florentine political life from the early 15th century, for his palace in Florence, just a few years after the epic feat itself. Originally the panels had an arched top, to be inserted between the arches of a room covered with a corbel arch. The heirs of Lionardo Bartolini then sold the paintings to Lorenzo il Magnifico, who had them placed in his palace in via Larga (now known as Palazzo Medici-Riccardi in via Cavour) probably asking Paolo Uccello, the painter of the cycle, to change the shape, as he did by signing the panel that is now at the Uffizi, in the bottom left. The integrations in the corners show the depiction of orange leaves, the “mala medica” or sour orange, that was the emblem of the Medici family. To show the armour and the bridles on the horses, Paolo Uccello used a rather large amount of metal leaf, which in the past would have given the painting a rich, wealth of colours. Uccello was a virtuoso in perspective, and he shows this in the construction of foreshortened bodies that allow us to assume a viewpoint from the bottom, due to the position of the panels in the palace belonging to Lionardo Bartolini

This panel is part of a cycle of three paintings that celebrate the victory of the Florentine forces over the Sienese troops and the alliance guide...