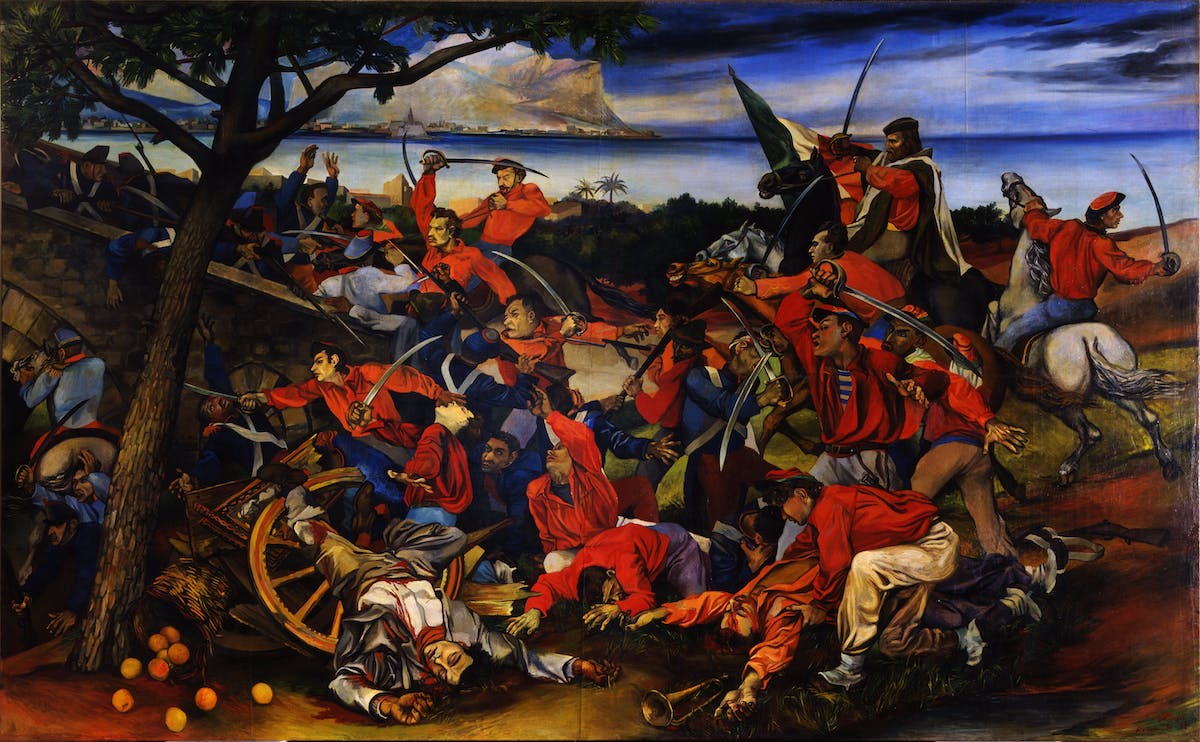 On the plains of Ponte dell’Ammiraglio in Sicily, not far from Palermo (whose broad gulf forms the backdrop of the painting), Giuseppe Garibaldi sits proudly astride a black destrier, wearing a red shirt, a cape around his neck and brandishing a drawn sword as he commands a chosen squad of fearless soldiers.

This scene from the Unification of Italy was carefully chosen by Guttuso as a paradigmatic example of the ideals of resistance and freedom which fueled the partisan Resistance during the Second World War and finally led to Italy’s liberation from Nazi-Fascist occupation. The topicality of the unification battle is emphasized in the faces of some of the soldiers, painted by Guttuso to resemble his lifelong companions and comrades from the partisan movement. Moreover, the artist includes two self-portraits, one in the fallen peasant in the foreground at the bottom left of the painting and the other in the Garibaldian soldier with the drawn saber stood on the right side of the painting. “I wanted to recreate the historic context through a link with modernity. My grandfather fought in the Battle of Ponte dell'Ammiraglio and I had listened to my father's tales”, the painter explained in 1982. Carefully studied elements of Italian Renaissance painting are combined with French Romanticism (from Delacroix to Géricault), never forgetting, of course, the clear reference to Picasso’s recently finished Guernica; the result is a masterpiece where autobiography and participation in a historic moment which led to difficult political decisions are united by the emphatic and direct style of social Realism.

Prepared following an extensive series of sketches, preparatory drawings and drafts, the work was finally presented at the Venice Biennale in 1952 where it met with controversy and fierce criticism from numerous sides. A second version followed, created in 1955 for the Istituto Studi Comunisti Palmiro Togliatti and currently in the National Gallery in Rome. The first version was acquired by the Gallery of the Statues and Paintings of the Uffizi in 2004, representing a “veritable expressive, ideological and dimensional pendant of the Battle of Cagli” (Natali 2005). The two Battles are displayed in scenographic and meaningful juxtaposition in the church of San Pier Scheraggio in the Uffizi Galleries.