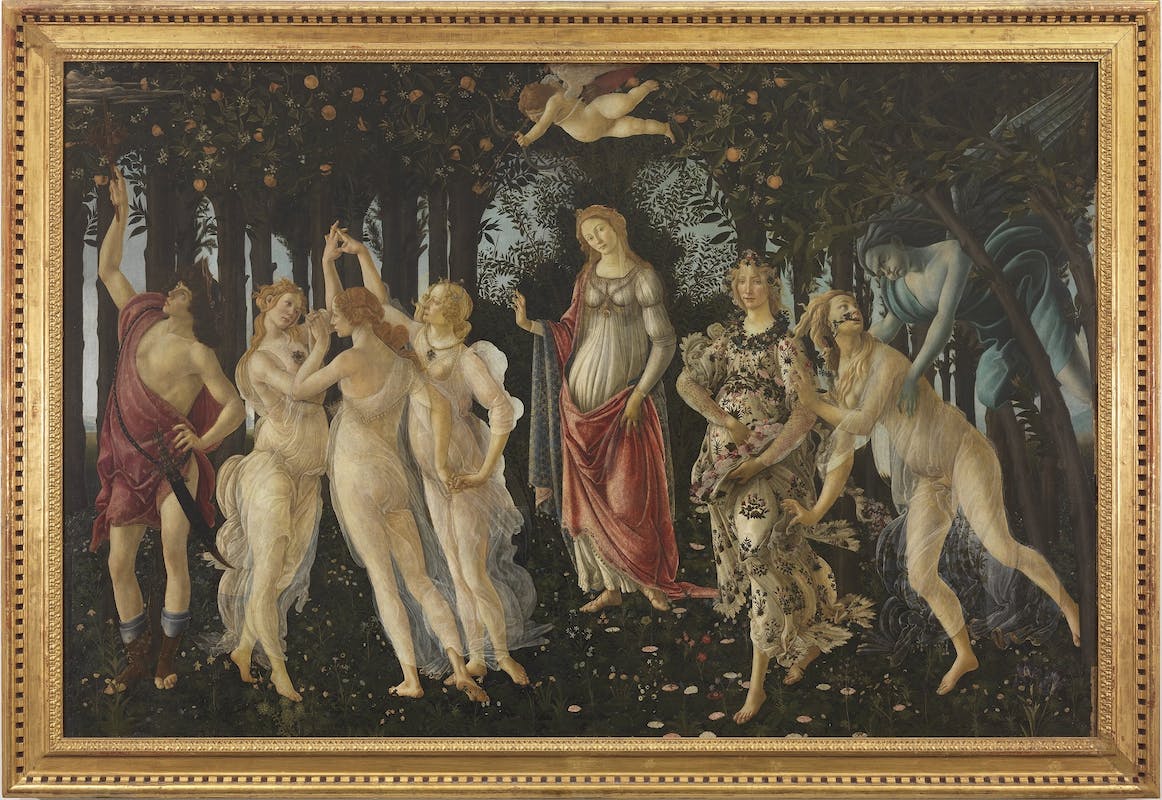 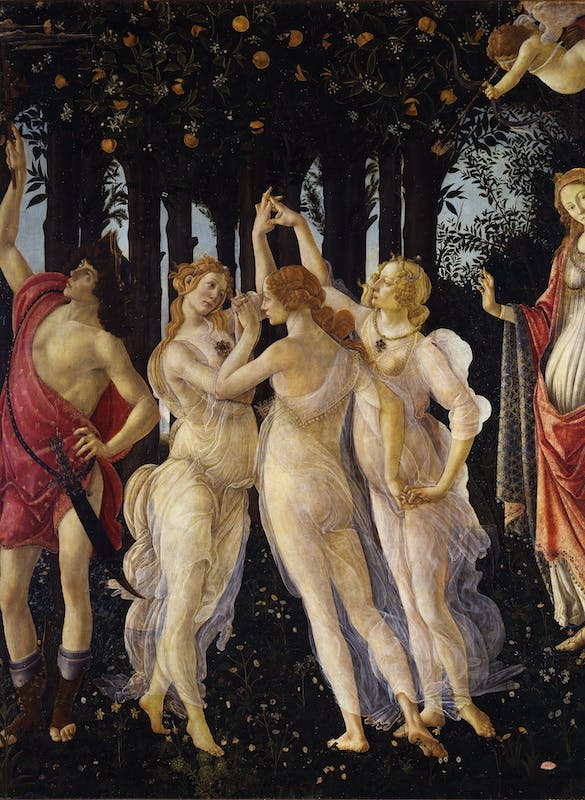 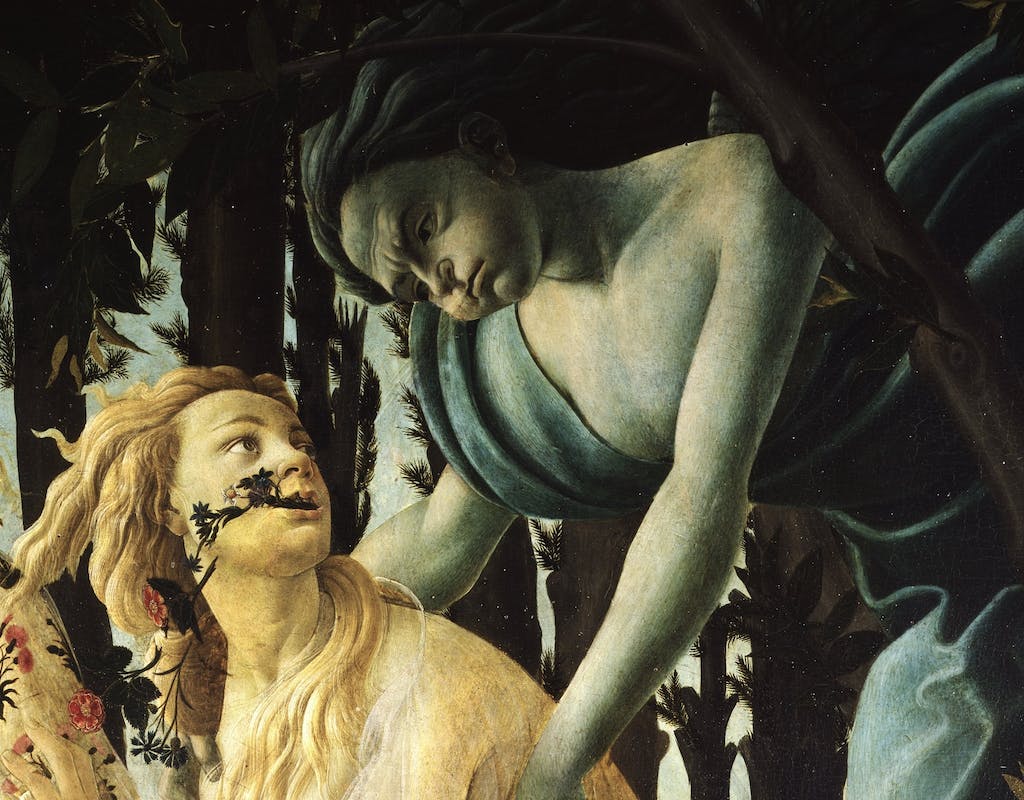 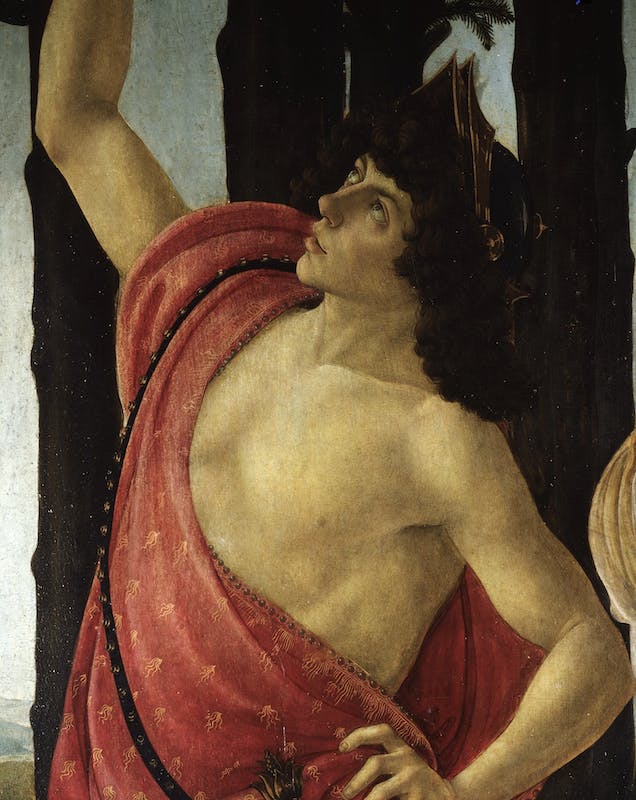 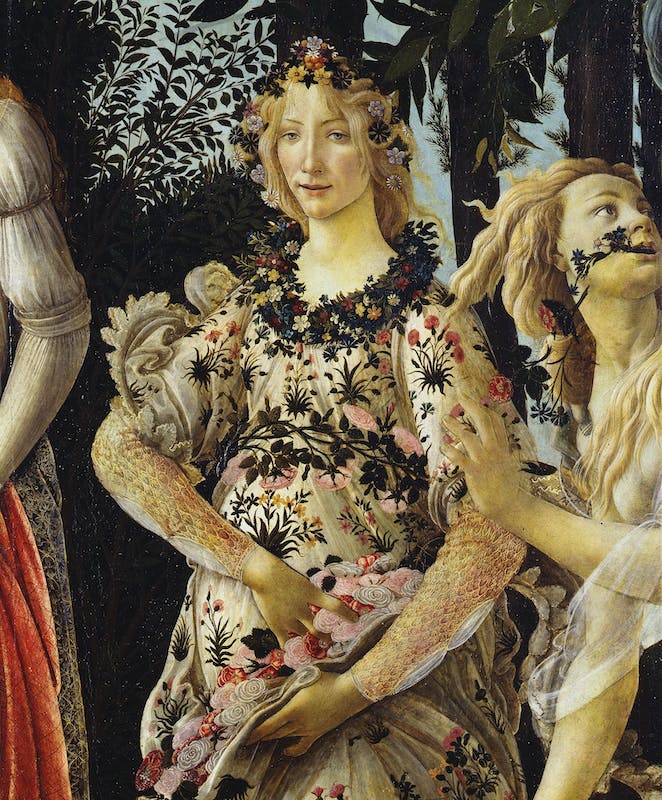 This painting, usually known as the Primavera [or ‘Spring’] shows nine figures from classic mythology advancing over a flowery lawn in a grove of orange and laurel trees. In the foreground, to the right, Zephyrus embraces a nymph named Chloris before taking her; she is then portrayed after her transformation into Flora, the spring goddess. The centre of the painting is dominated by the goddess of love and beauty, Venus, chastely dressed and set slightly back from the others, and by a blindfolded Cupid, firing his arrow of love.

On the left, the three Graces, minor goddesses with virtues like those of Venus, are shown dancing in a circle. The composition is closed by Mercury, messenger of the Gods, recognisable from his helmet and winged sandals, as he touches a cloud with his staff.

Although the complex meaning of the composition remains a mystery, the painting is a celebration of love, peace, and prosperity.  The dark colour of the vegetation is in part due to the ageing process of the original pigment, but is lightened by the abundance of fruits and flowers. At least 138 species of different plants have been identified, all accurately portrayed by Botticelli, perhaps using herbaria. The attention to detail confirms the artist’s commitment to this piece, which is also evident in the sheer skill with which the paint has been applied.

It is painted on a poplar wood backing and towards the end of the 15th century, it was to be found in the house in Via Larga (modern-day Via Cavour) that belonged to the heirs of Lorenzo di Pierfrancesco de’ Medici, cousin of Lorenzo the Magnificent. It was hung above a lettuccio, a kind of chest with back that was often among the furniture items in noble renaissance homes. It was later moved to the Villa di Castello, where Giorgio Vasari (1550) describes it together with the Birth of Venus .

This painting, usually known as the Primavera [or ‘Spring’] shows nine figures from classic mythology advancing over a flowery lawn in a grove of o...