Barely twenty days after the opening of an exhibition at the Uffizi devoted to the purchase of two preparatory paintings by Luca Giordano and Taddeo Mazzi, the Uffizi Galleries are now launching a second exhibition to present the prestigious acquisition of yet another important painting in 2016, by Anton Raphael Mengs (Aussig, 1728 – Rome, 1779), portraying Ferdinando and Maria Anna, two of the children of Archduke of Tuscany Pietro Leopoldo of Lorraine and of his consort María Luisa de Borbón y Sajonia, dressed in contemporary costume and depicted inside the Pitti Palace.
"The task of a living museum is to safeguard works of art, to preserve memory and to transmit culture through exhibitions and research, but also to allow its collections to ‘breathe’ with targeted additions closely linked to the story of the city, of its hinterland and of the collection of which they are going to become a part. Acquisitions, especially if they are so subtly motivated, are a crucial part of a museum’s life, particularly if they are the product of research guaranteeing both their provenance and a fertile interaction with the museum’s existing heritage." (E. D. Schmidt)
When this unfinished painting appeared on the antique market, it was instantly clear that it had to enter the collections of the Gallerie degli Uffizi so that we could showcase it in the Pitti Palace, because even if Anton Raphael Mengs did not paint the picture entirely in the palace, he certainly conceived it there. The young princes lived in the Pitti Palace with their family, under the watchful eye of governesses and tutors, of course, but more especially under that of their own parents, while the Boboli Gardens were their playground.
We were eager to celebrate the new acquisition, which would not have been possible without the generous cooperation of the Galleria Virgilio in Rome, with an exhibition illustrating the historical and artistic environment in which the portrait was painted.
Mengs was born in Bohemia but soon moved to the west, becoming an adoptive Italian and Spaniard. He sought permission from King Charles III of Spain to travel to Rome so that he could both work and pursue his study of Classical antiquities and of the great Renaissance artists, chiefly that of Raphael after whom he had been named. The Spanish King, who loved Italy and had once almost governed Tuscany himself (eventually becoming the King of Naples), granted Mengs permission to make the trip but only on condition that he send him portraits from Florence of his young grandchildren, the children of his daughter María Luisa de Borbón y Sajonia and of Pietro Leopoldo of Lorraine. The pictures, loaned to the exhibition by the Museo del Prado where they normally hang, were painted while Mengs was in the Tuscan capital from April 1770 to January 1771. The portraits show us Pietro Leopoldo’s two extremely young children dressed in Spanish court attire with the marks of royalty (the Golden Fleece) in the traditional dress of the Infantes, as reported in the Gazzetta Toscana published on 29 September 1770. Once finished, but before they were packed up and shipped to the Spanish court, the portraits were shown to the Florentine public in the Pitti Palace, where they were much admired both for their sparkling technique and for their accurate rendering of the sitters’ features.
At the same time as Mengs was painting these portraits of the children for their grandfather, the Spanish King, however, he must also have produced the picture recently purchased by the Uffizi Galleries portraying Ferdinando and Anna Maria with a totally different approach and in a very different spirit. The two children portrayed here, looking happier than the children depicted in many of Mengs’s other works, are shown in contemporary clothing, and the choice of full, resonant hues such as the green and pink of their attire instantly reveals this new spirit. The prince is dressed in boy’s costume and the feather hat in his right hand is the kind of headgear one might have worn for strolling or hunting, thus introducng a touching note of daily intimacy into the picture – a far cry from the stiff, ceremonial approach evinced in the official portraits now in Madrid. The painting must have been very much to the liking of Pietro Leopoldo, a man of stern tastes, an enlightened sovereign, a reformer, in fact a thoroughly "modern" (not to say bourgeois) monarch in both his public and his private life. We are drawn to the picture because we can not only see the lesson of Velázquez in it, but we actually get a foretaste of Goya, a great admirer of Mengs, and even of Manet.
The official court portrait painter to Pietro Leopoldo, however, was another German – albeit a naturalised Englishman – called Johann Zoffany. The exhibition showcases the portrait that he painted of Pietro Leopoldo’s first-born son Francis, the first Grand Duke of Tuscany of the House of Lorraine, which was painted for Francis’s paternal grandmother, the Empress Maria Theresa of Austria, and which has been loaned by the Kunsthistorisches Museum in Vienna. Having doffed the dazzling turquoise attire of a Spanish Infante, we discover him in the courtyard of the Pitti Palace leaning against the majestic rustication, a small man fairly split between his government duties, his arms and his studies. This very fine portrait, which has returned to Florence for the first time since it was despatched to Vienna, depicts a boy who, while he may appear a little melancholic, is already very much aware of his imperial destiny.
The exhibition opens with portraits of the sitters’ grandparents, parents and little cousins from Naples and Parma, and closes with the self-portraits of the two painters from the Uffizi’s celebrated collection: Mengs’s famous, heroic self-portrait, bursting with emotion even though it is not yet Romantic; and Zoffany’s subtly ironic self-portrait in which he portrays himself with his small dog a painting that will come as a pleasant surprise to visitors after being specially restored for the exhibition.

The exhibition is curated, and the catalogue published by Sillabe is edited, by Matteo Ceriana and Steffi Roettgen. 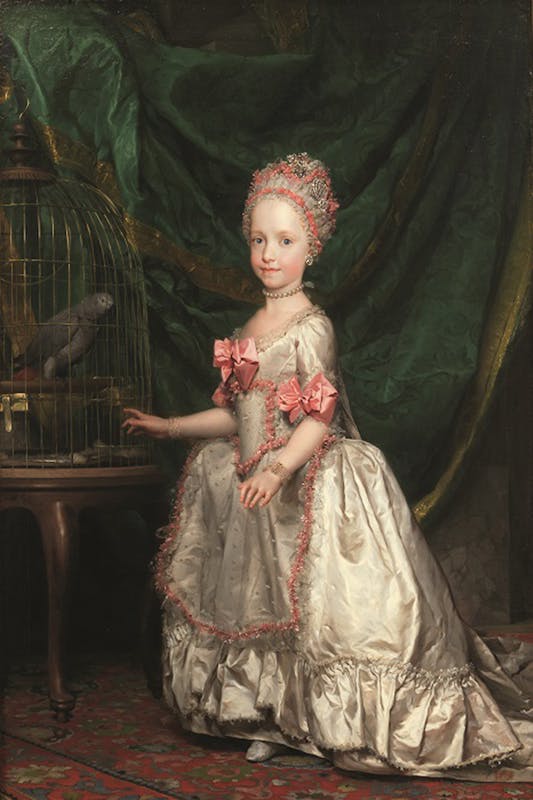 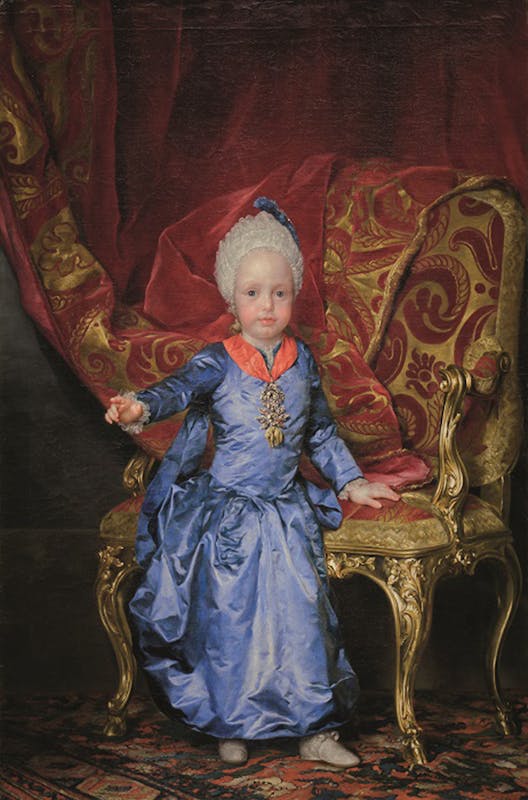 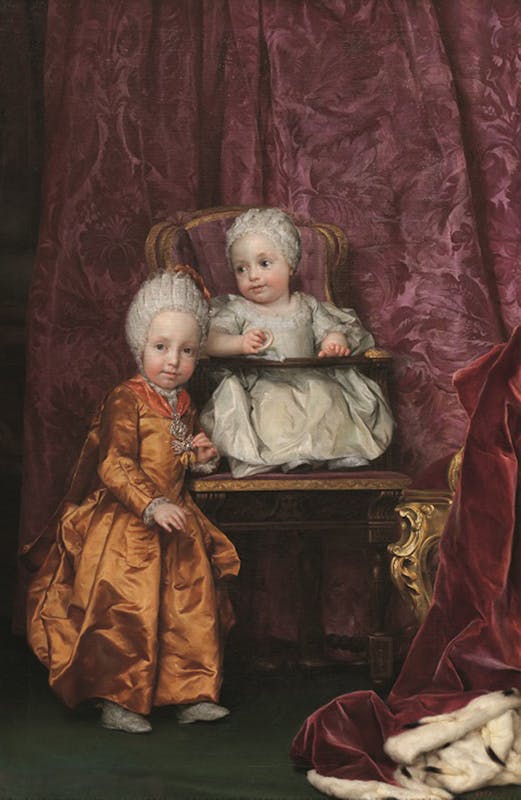 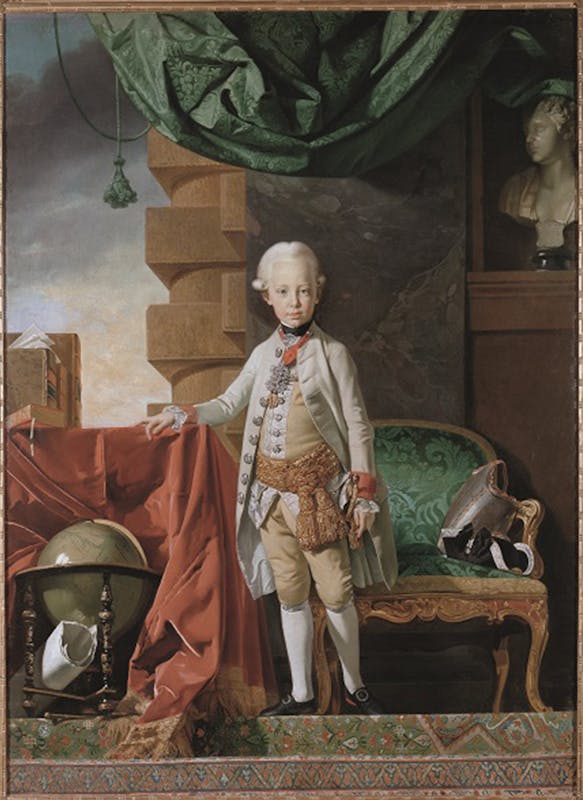 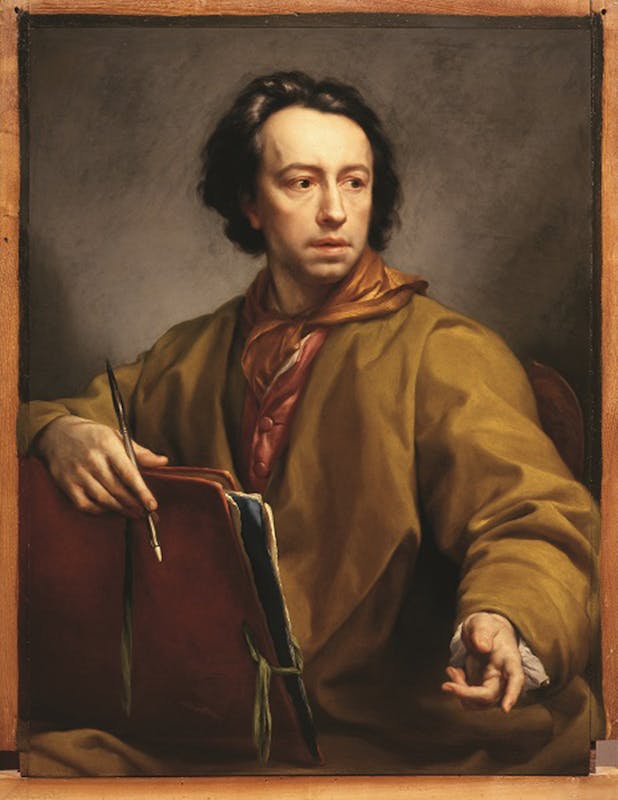 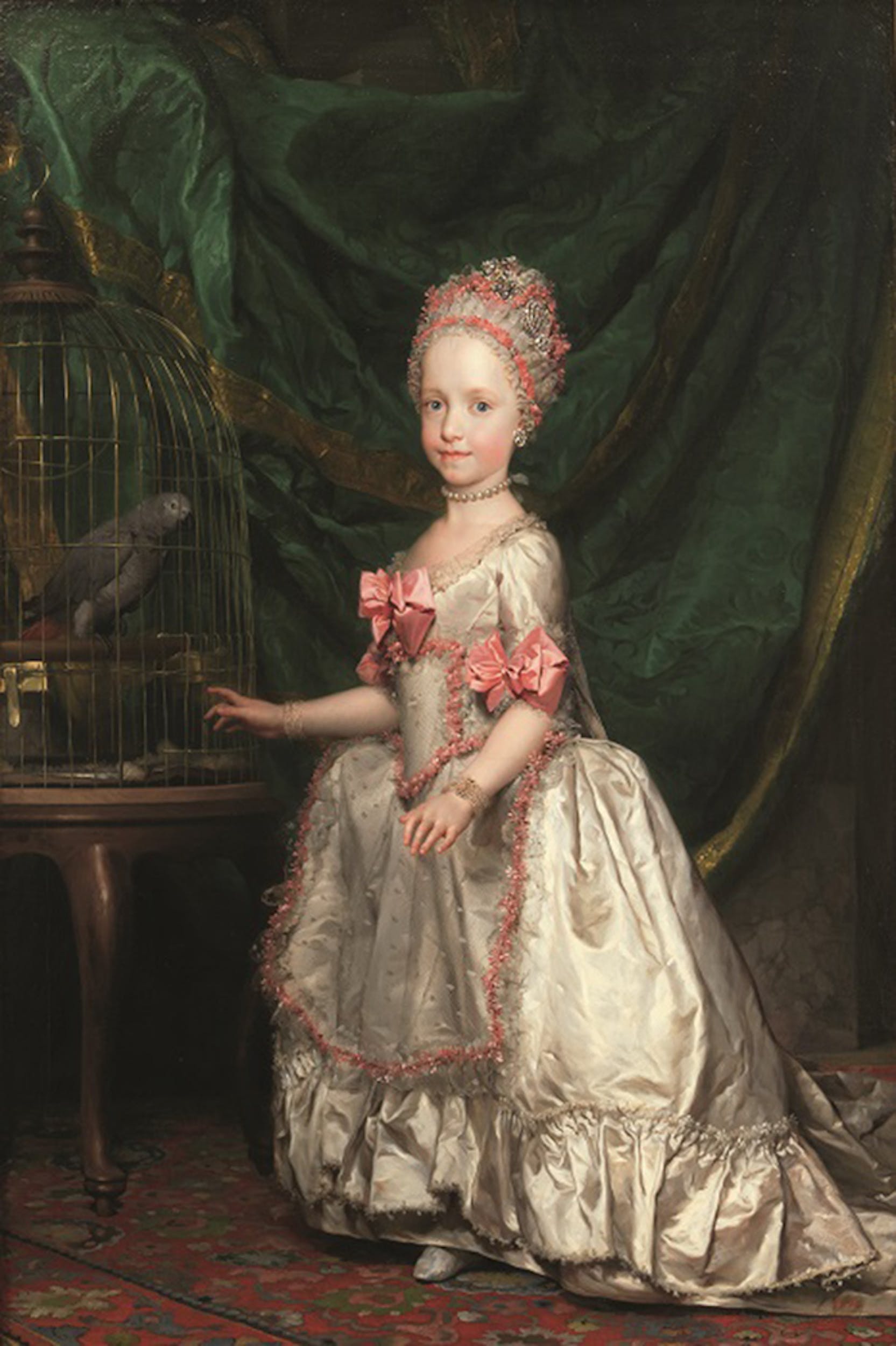 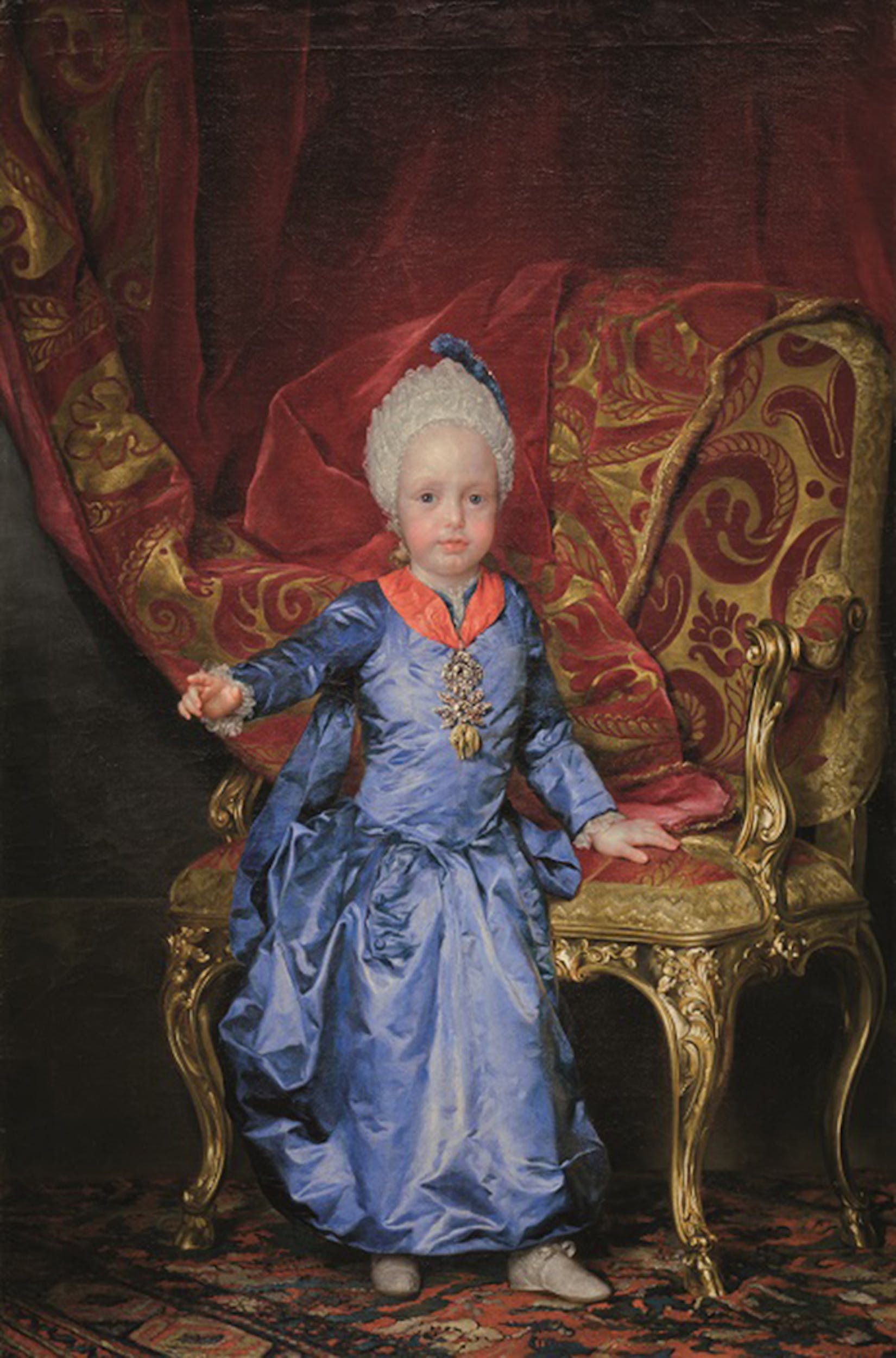 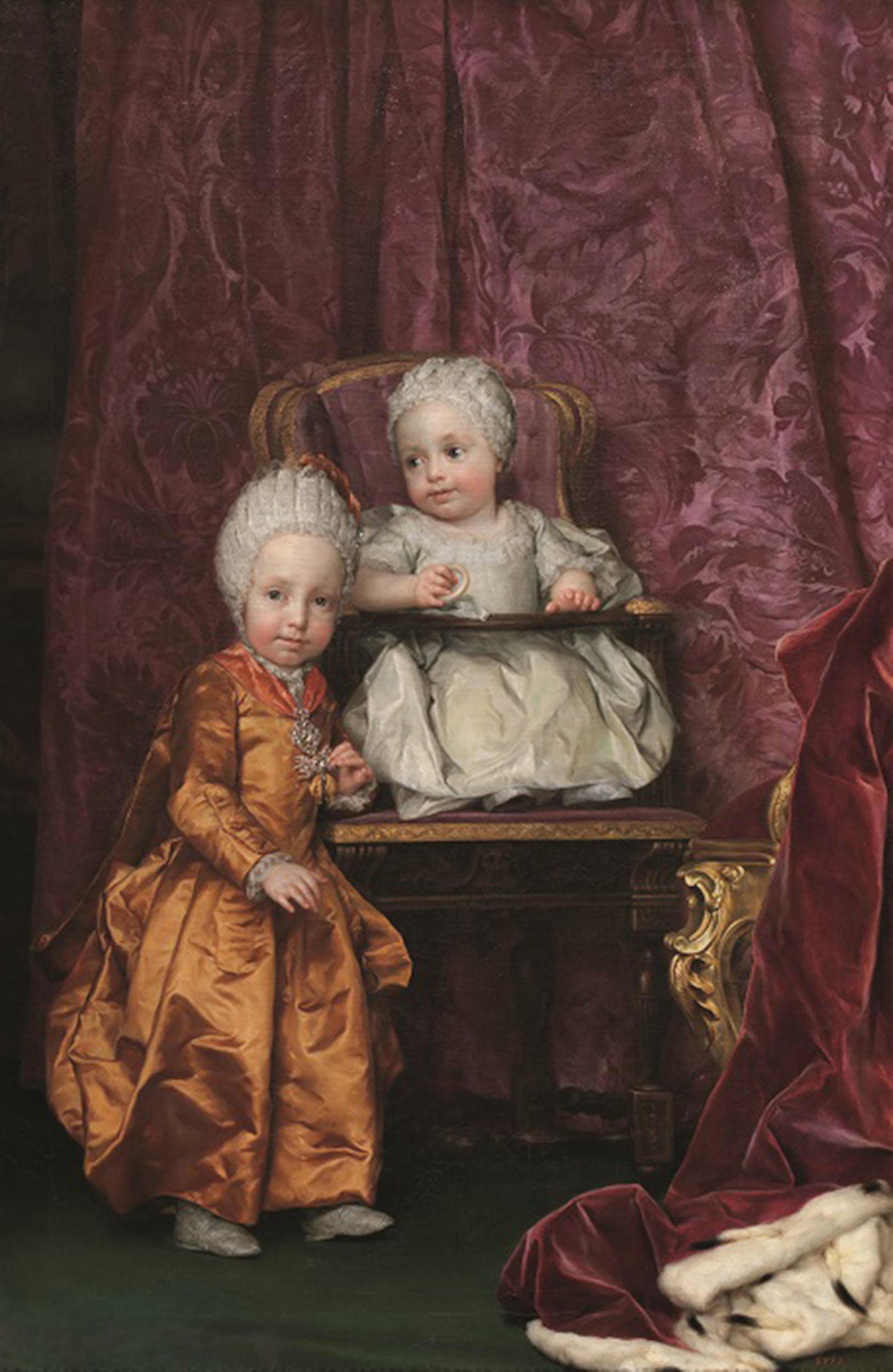 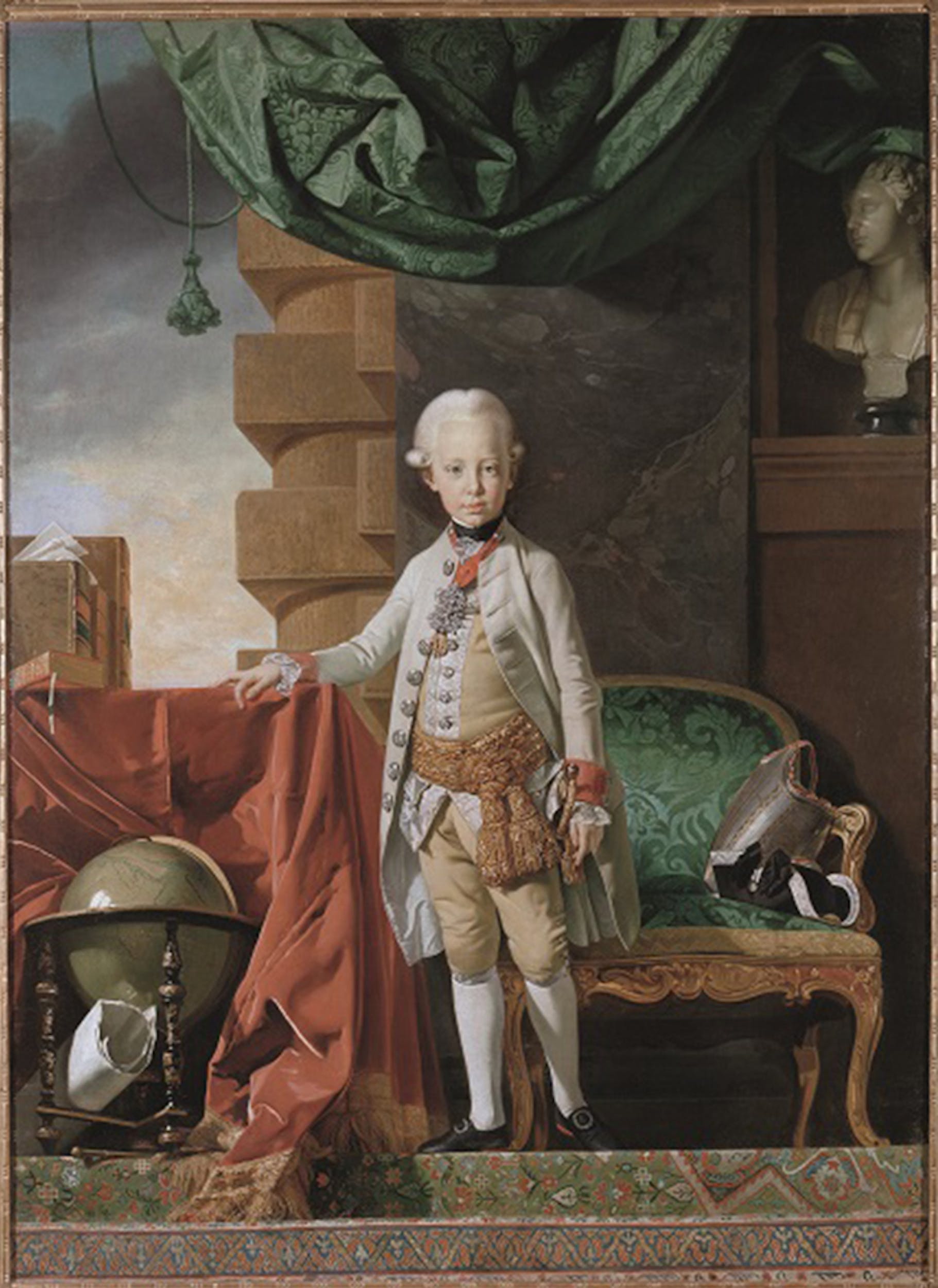 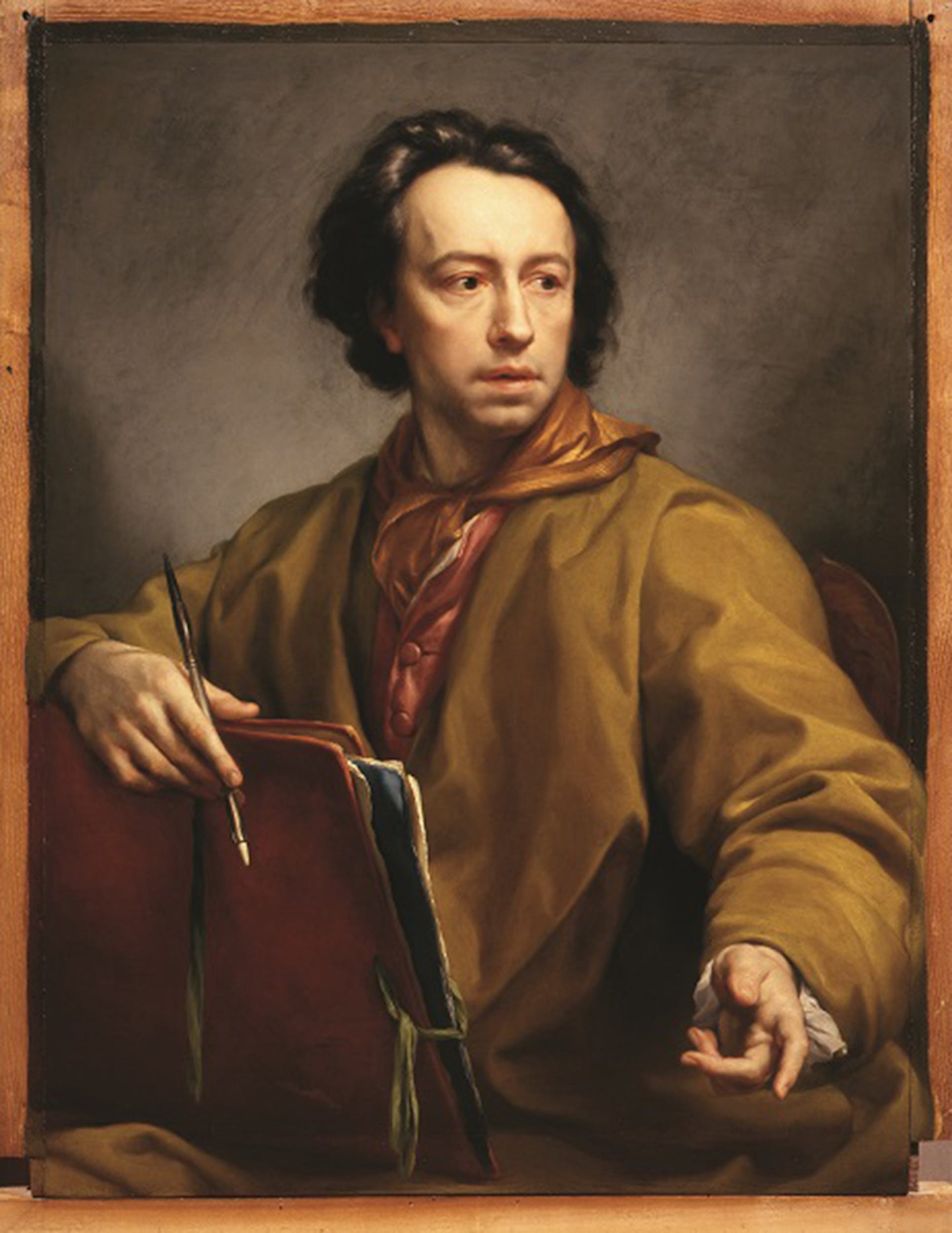 The same as Pitti Palace info