City of Flowers in the Sky is inspired by Botticelli’s Renaissance masterpiece Primavera. In about ten minutes, using the sunlit sky as canvas, nearly 50,000 customized fabricated fireworks will shoot out smokes resembling thousands of flowers from the Renaissance. As a generous gift to Florence, cradle of the Renaissance, the explosion builds new memories in its name. It will also mark the opening of the solo exhibition Flora Commedia: Cai Guo-Qiang at the Uffizi, which will open its doors to the public on November 20th until February 17th 2019.

City of Flowers in the Sky begins with "Thunder", and follows with six acts including "God of the West Wind and Goddess of the Land", "The birth of Flora", "Venus", "Three Graces", "Spiritual Garden" and "Red Lily".

The sky of Florence is suddenly filled with the roar of rolling “Thunder,” followed by a rush of violent, thrashing silver flashes and smoke colorful columns, as though “God of the West Wind and Goddess of the Land” were playfully resisting the temptation of the opposite sex, and finally merge into one harmony with the birth of Flora. In the following minutes, an upsurge of multicolor explosions covers the sky hundreds of meters above. The viewer intuits that this is the appearance of Flora, Goddess of flowers and spring—bearing life, nurturing, and flourishing energy. Then colorful smoke spurts, and a large sheet of white cascading fireworks drifts gently downwards, 150 meters above the viewer. Black, white and red smoke weave and tumble to give way to the apparition of “Venus.” Large streaks of pure, white willow fireworks drift downward, interwoven with hints of pink and budding yellow—countless hanging threads—the “Three Graces,” paragons of Renaissance beauty. Immediately after follows the “Spiritual Garden” rendered by shooting smoke that resembles blossoms in white and black. At the finale, lusters of the city’s symbol, “Lily,” converge into a magnificent red cloud.

Following the artist’s realization of the daytime explosion event Black Ceremony in Doha in 2011, to Elegy on the Huangpu River in Shanghai in 2014, City of Flowers in the Sky is his largest and most complex to date. The artist first drew hundreds of sketches to determine the effect of each product and every scene of the fireworks. A team from Liuyang, the Chinese town of fireworks, specifically developed and produced the explosives in accordance with the artist’s drawings, also generating the technical programming based on Cai’s sketches. The project is realized in collaboration with two Italian local fireworks companies.

For City of Flowers in the Sky, Cai Guo-Qiang created a 24-meter color gunpowder artwork on handmade hemp paper in an attempt to evince the ambience and framework of the daytime firework in the gunpowder drawing, which in turn became the finale of the ten rooms of the solo exhibition Flora Commedia on view at the Uffizi. 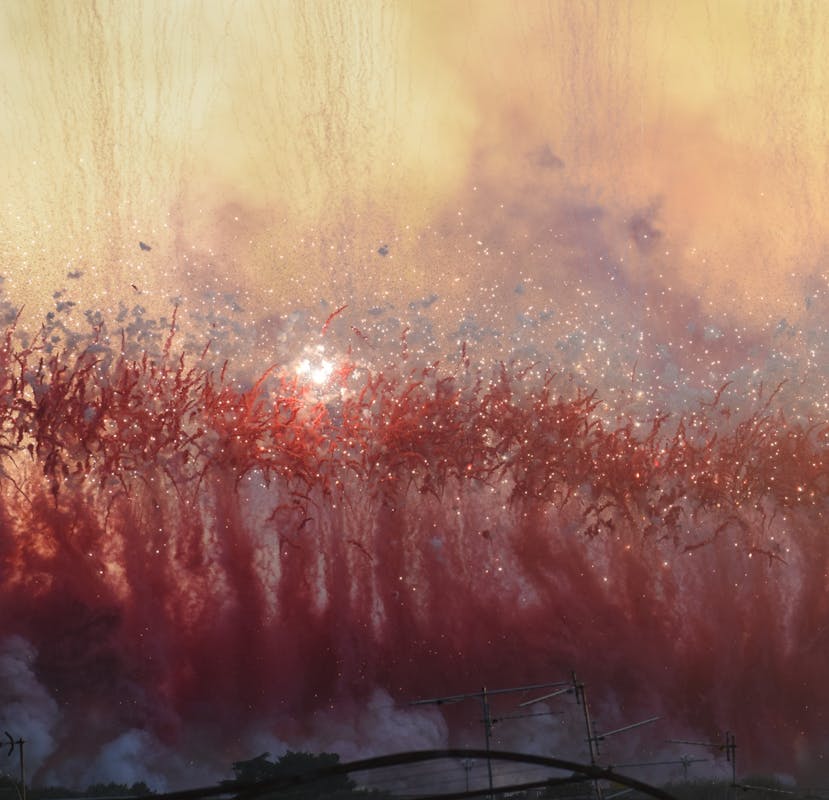 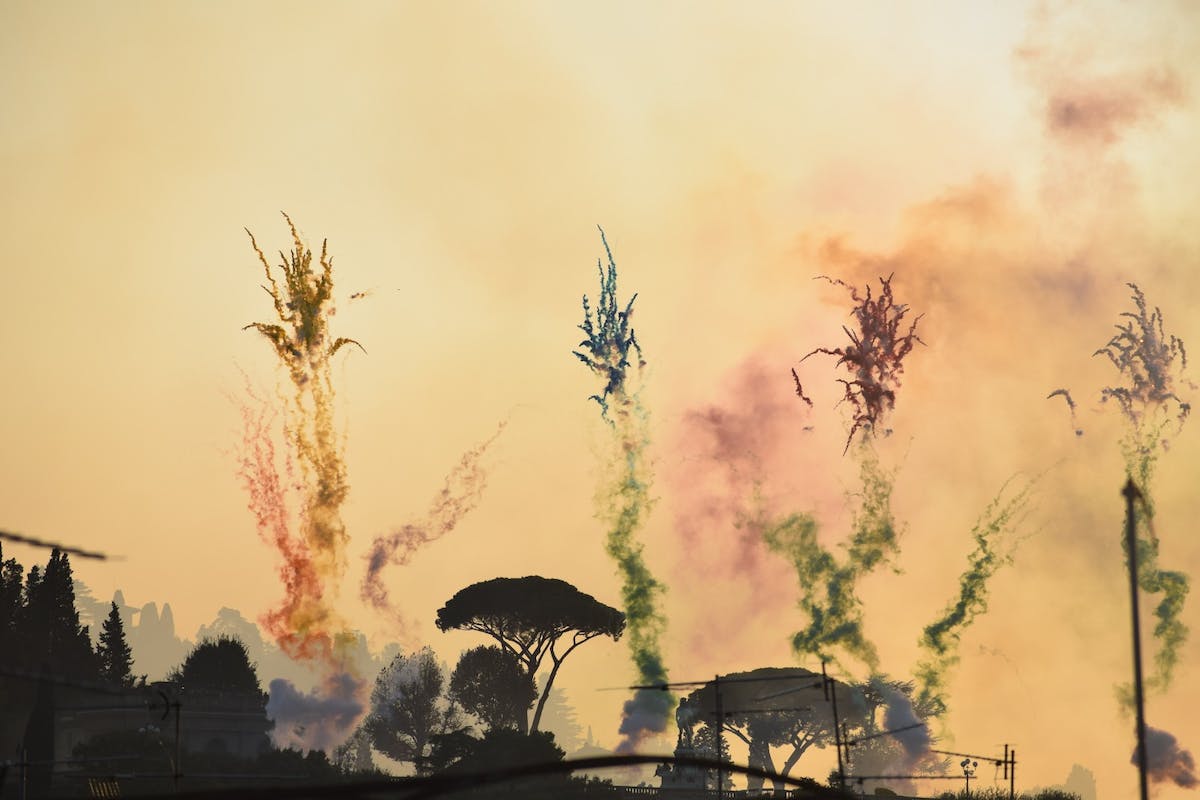 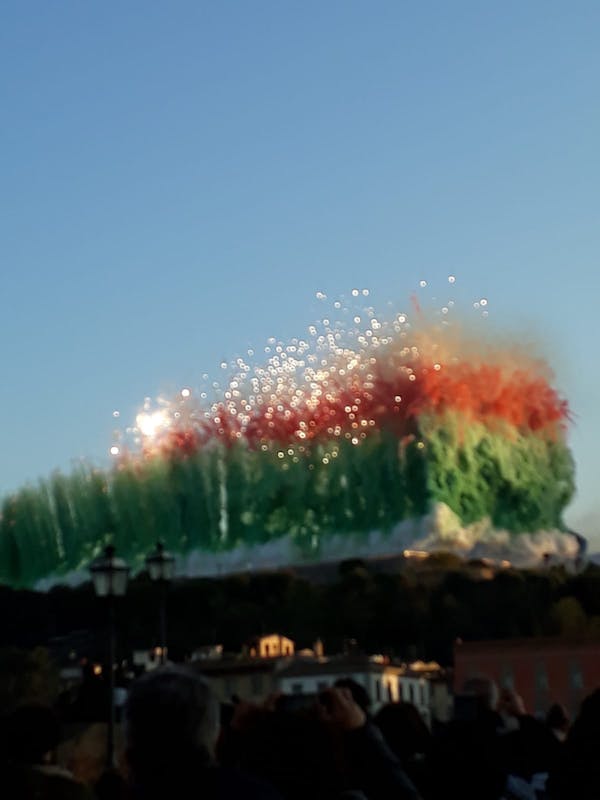 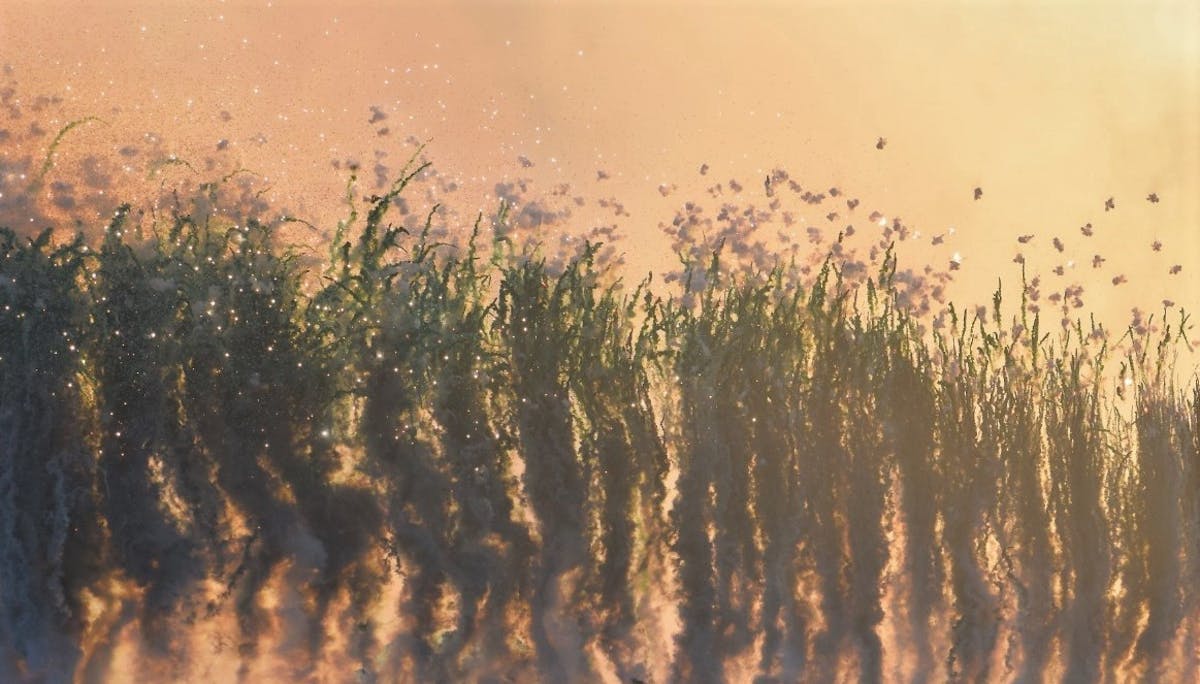 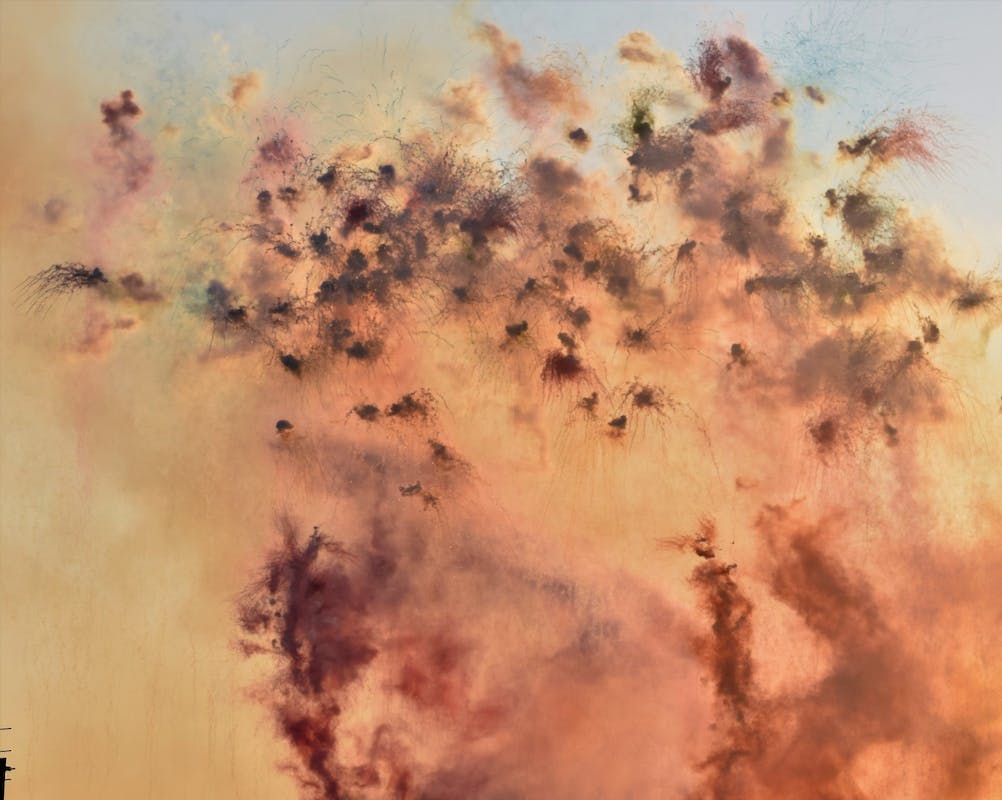 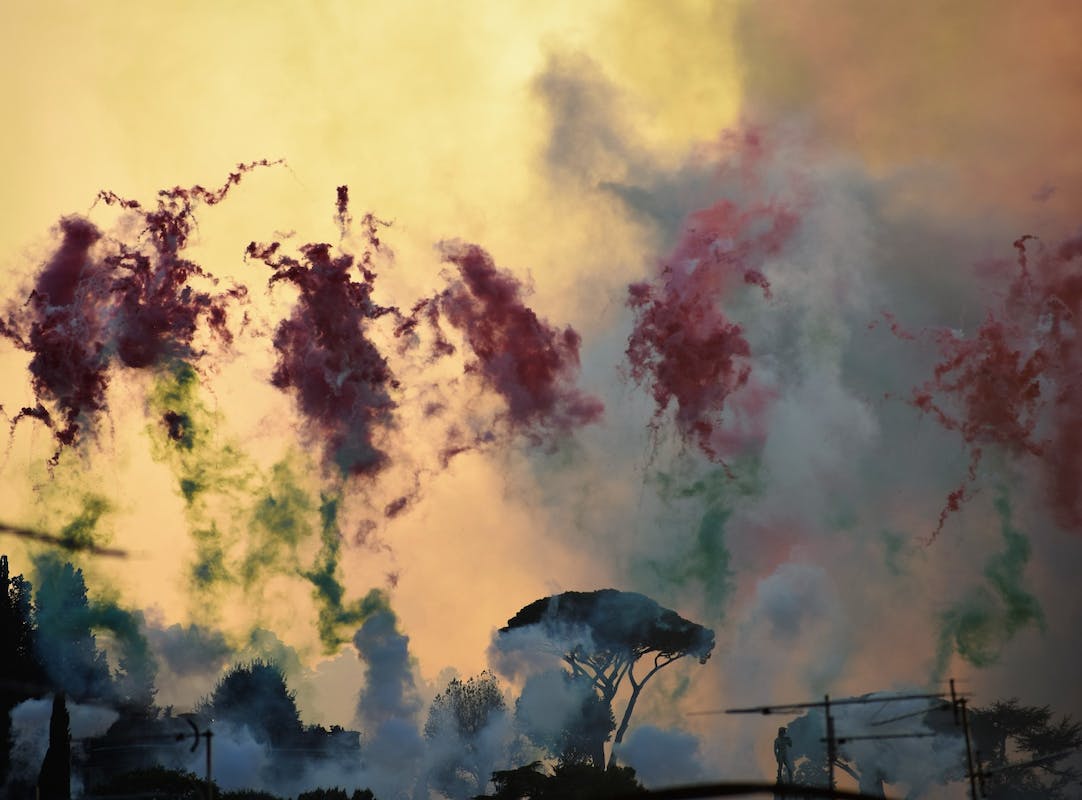 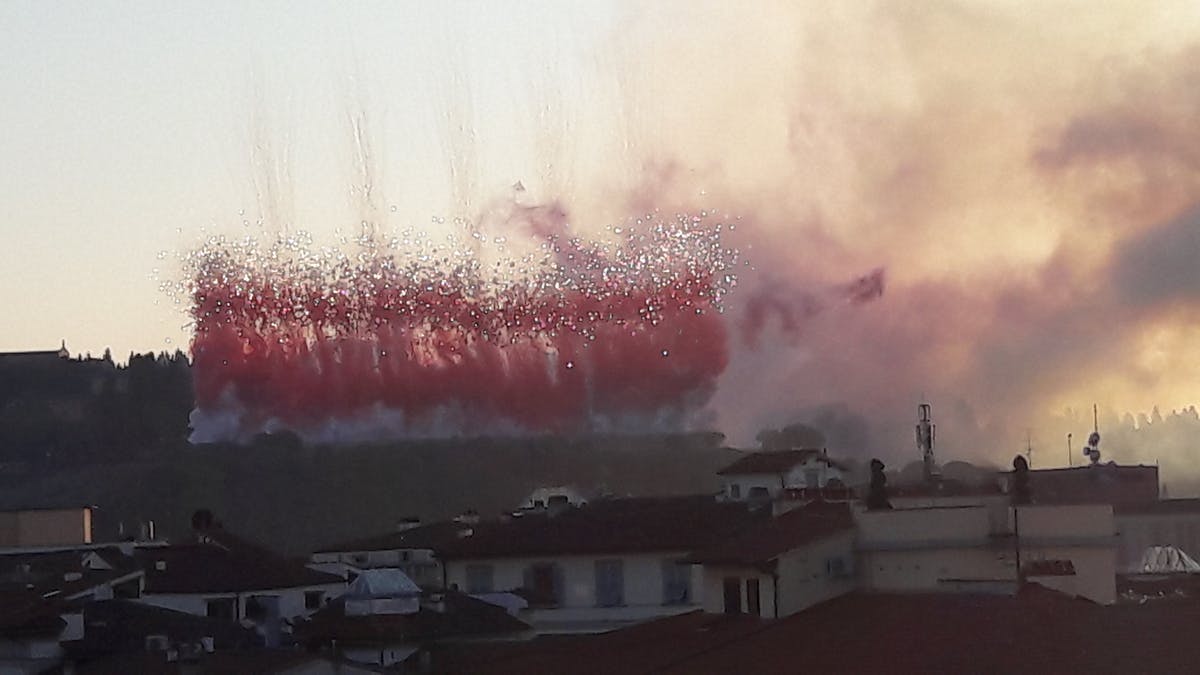 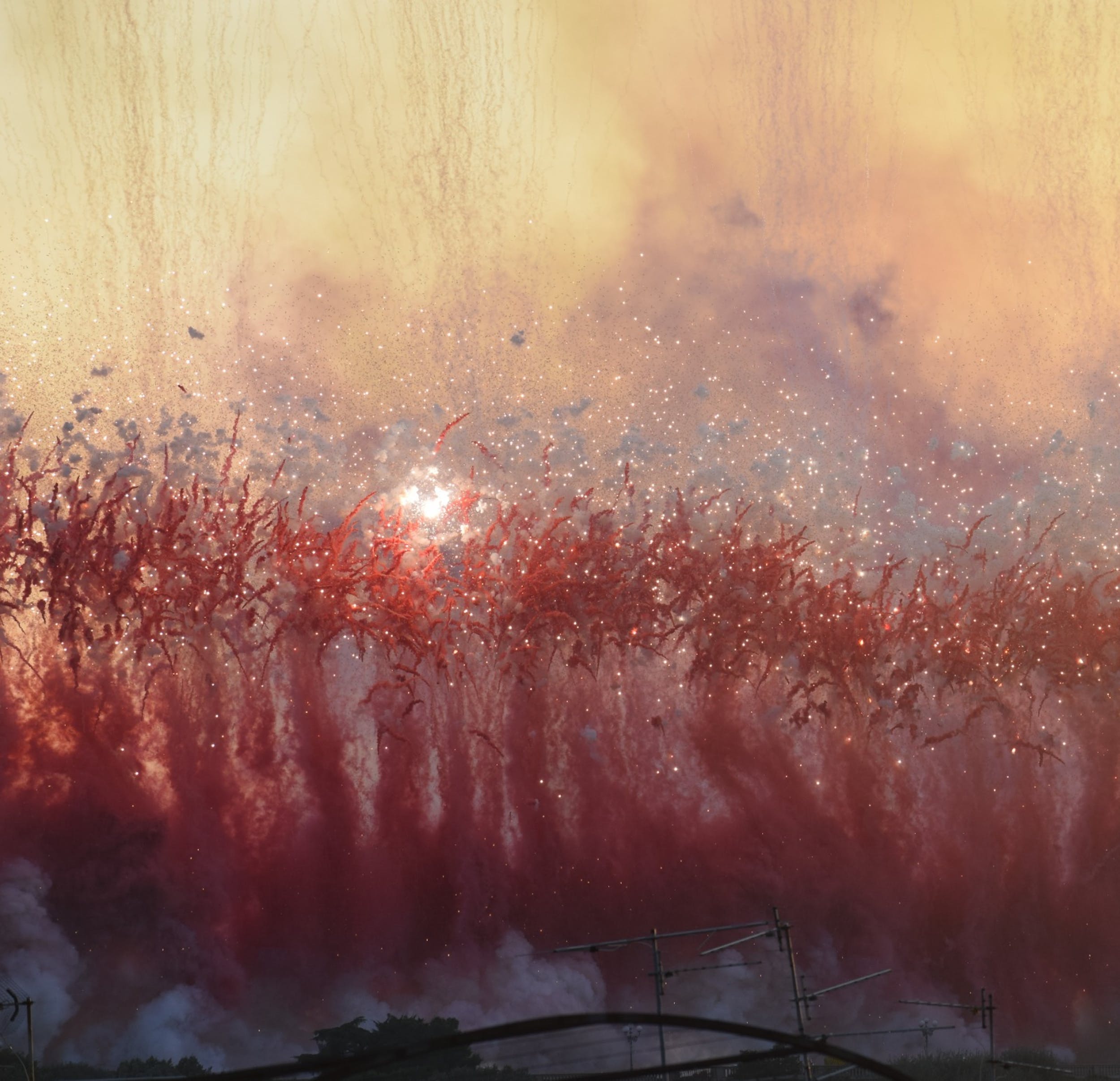 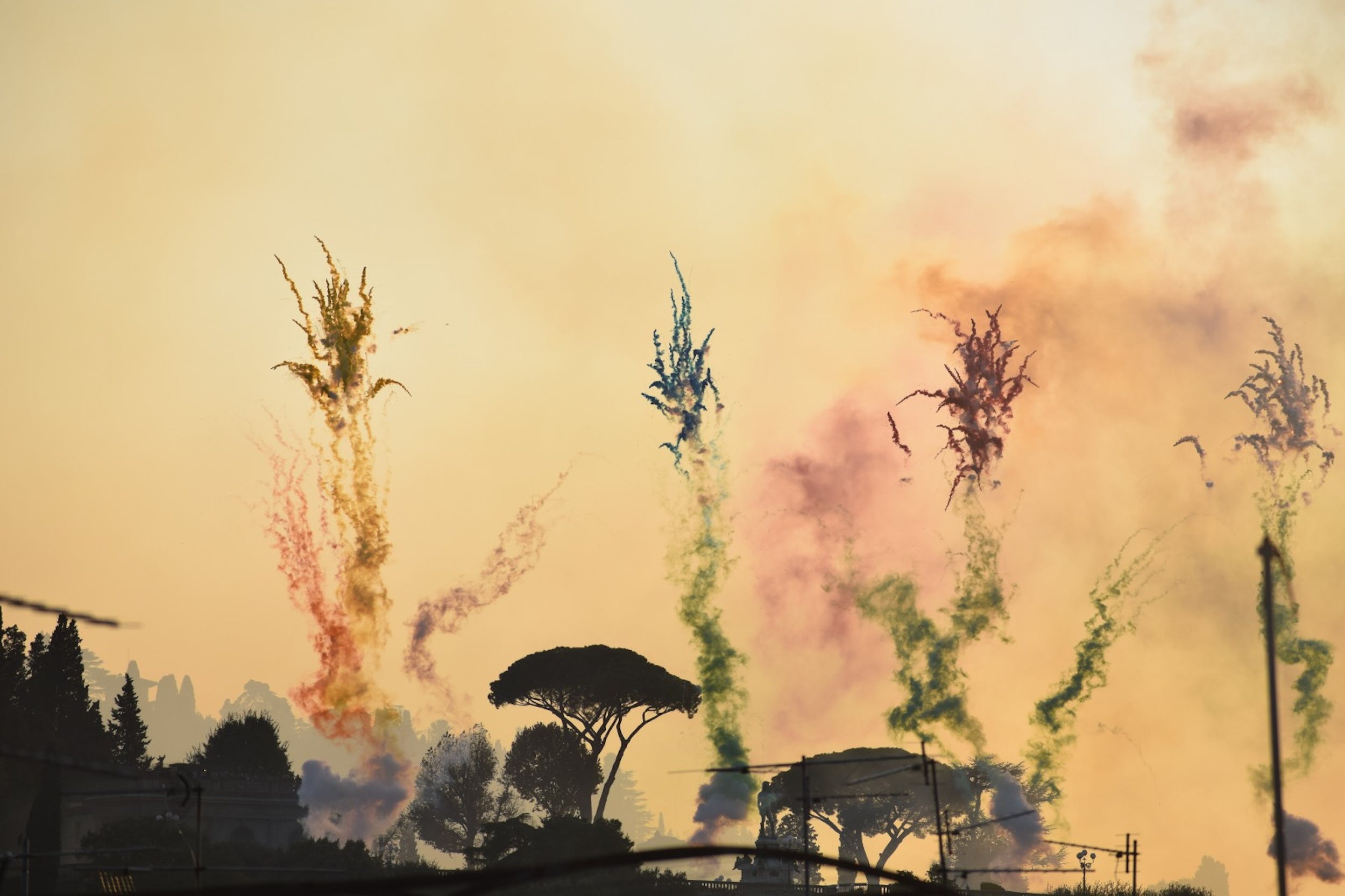 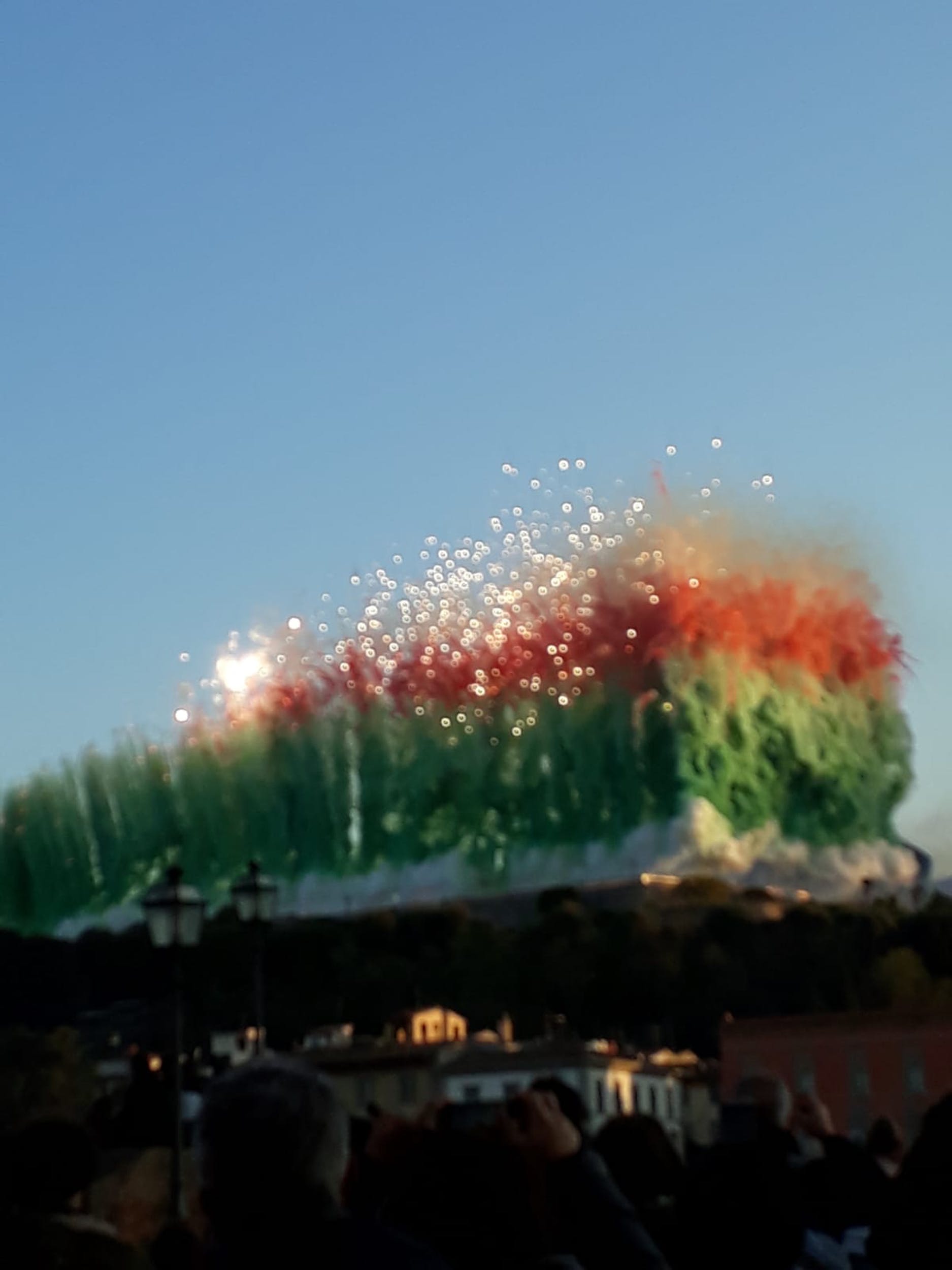 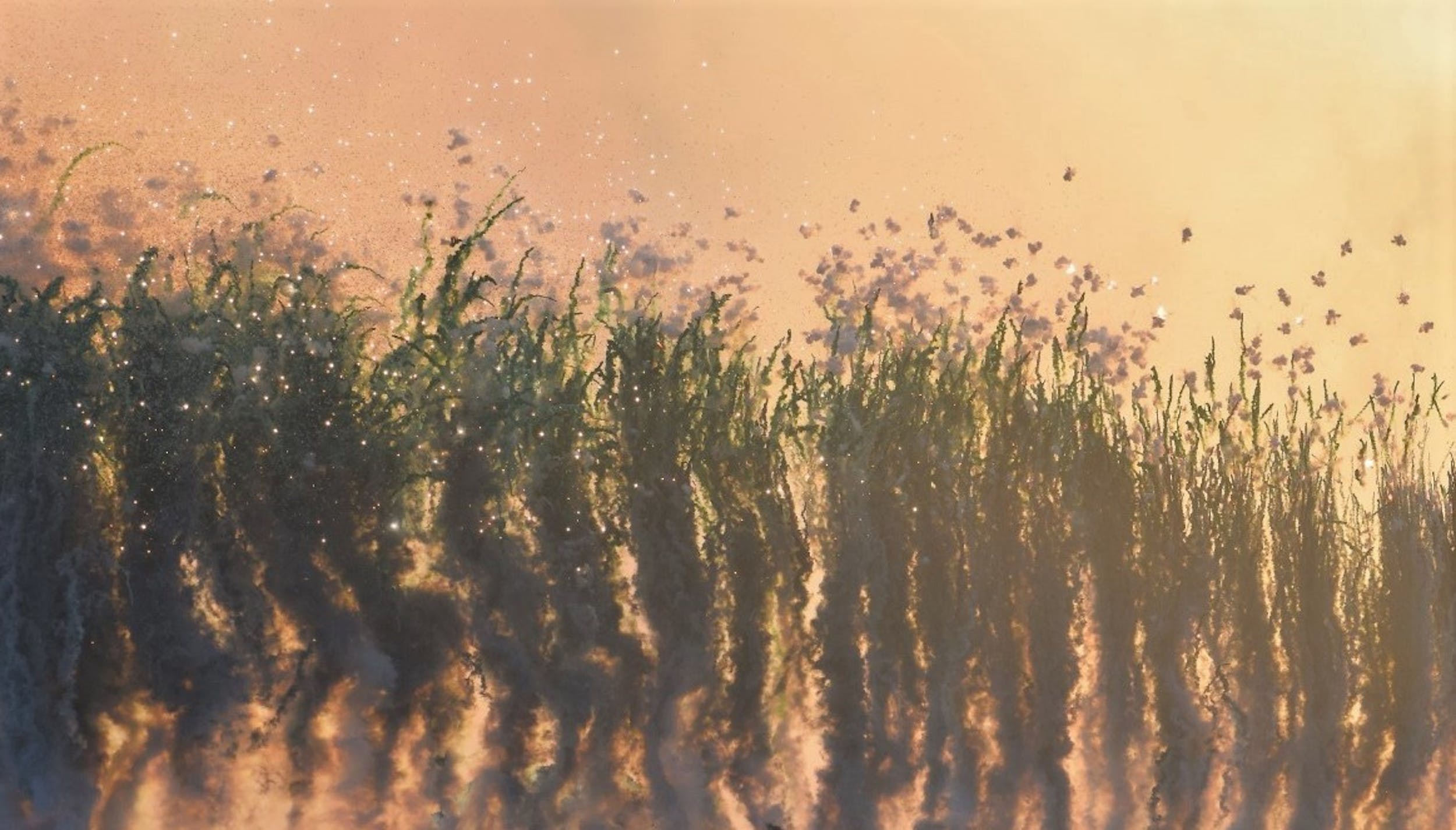 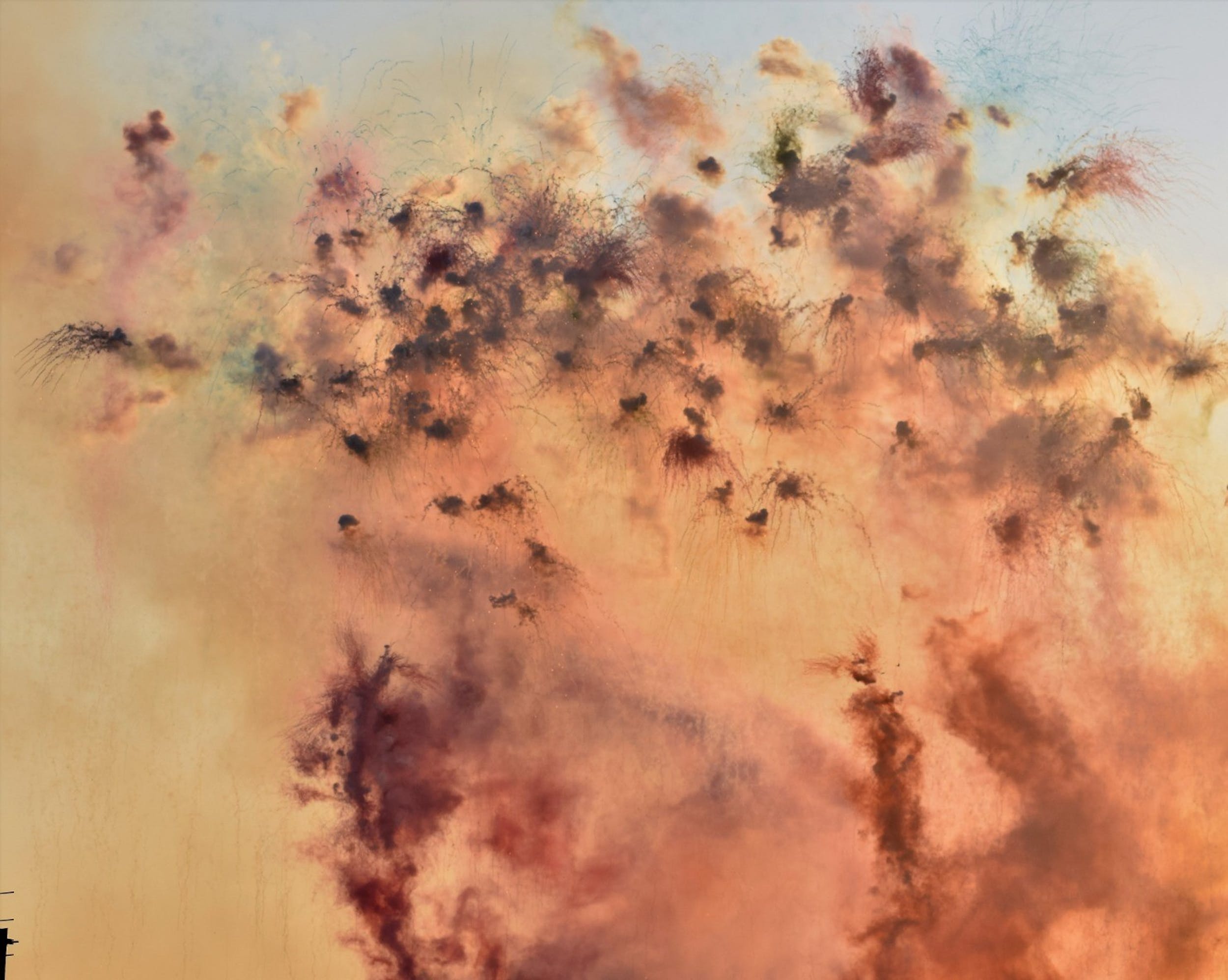 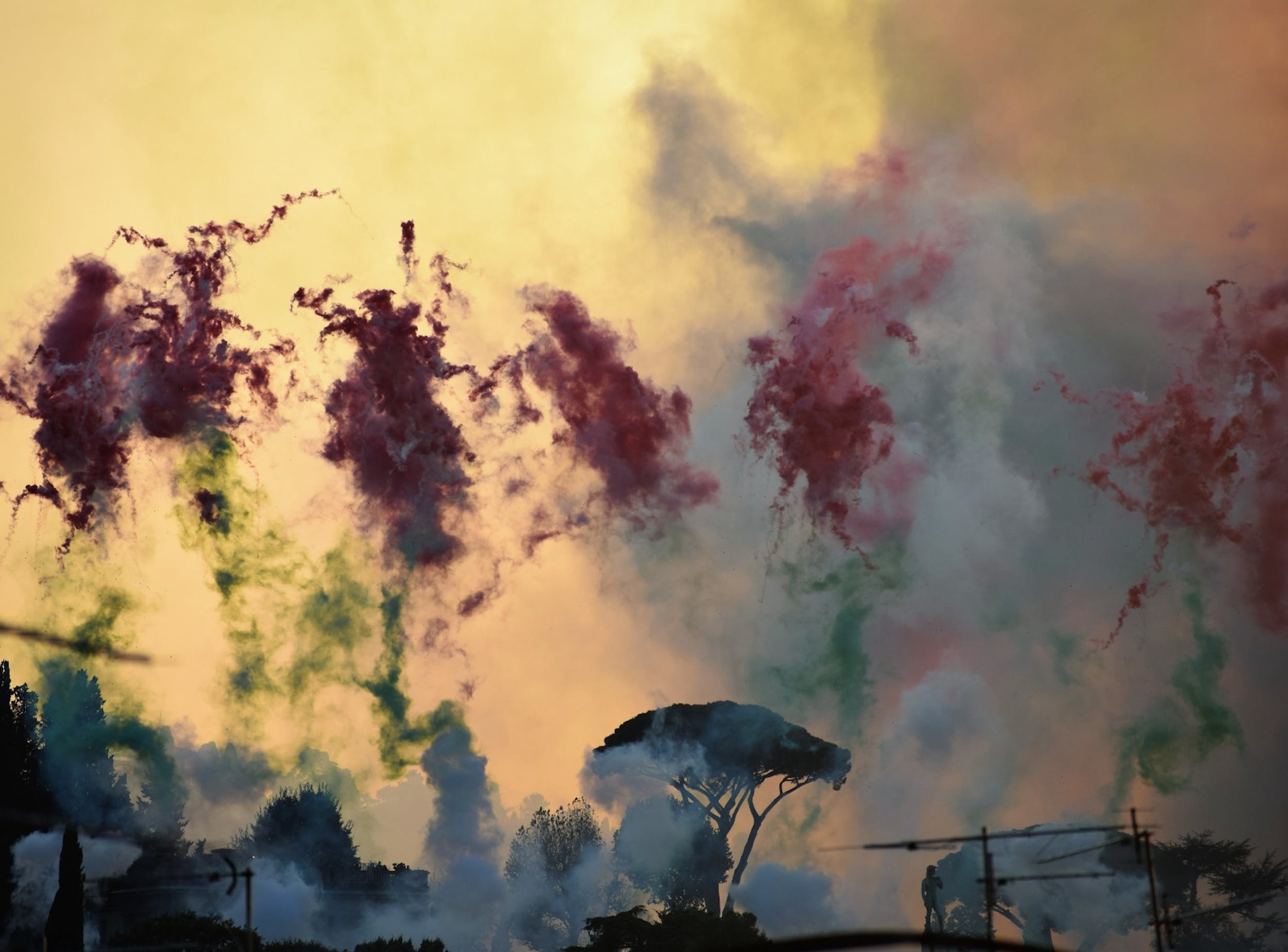 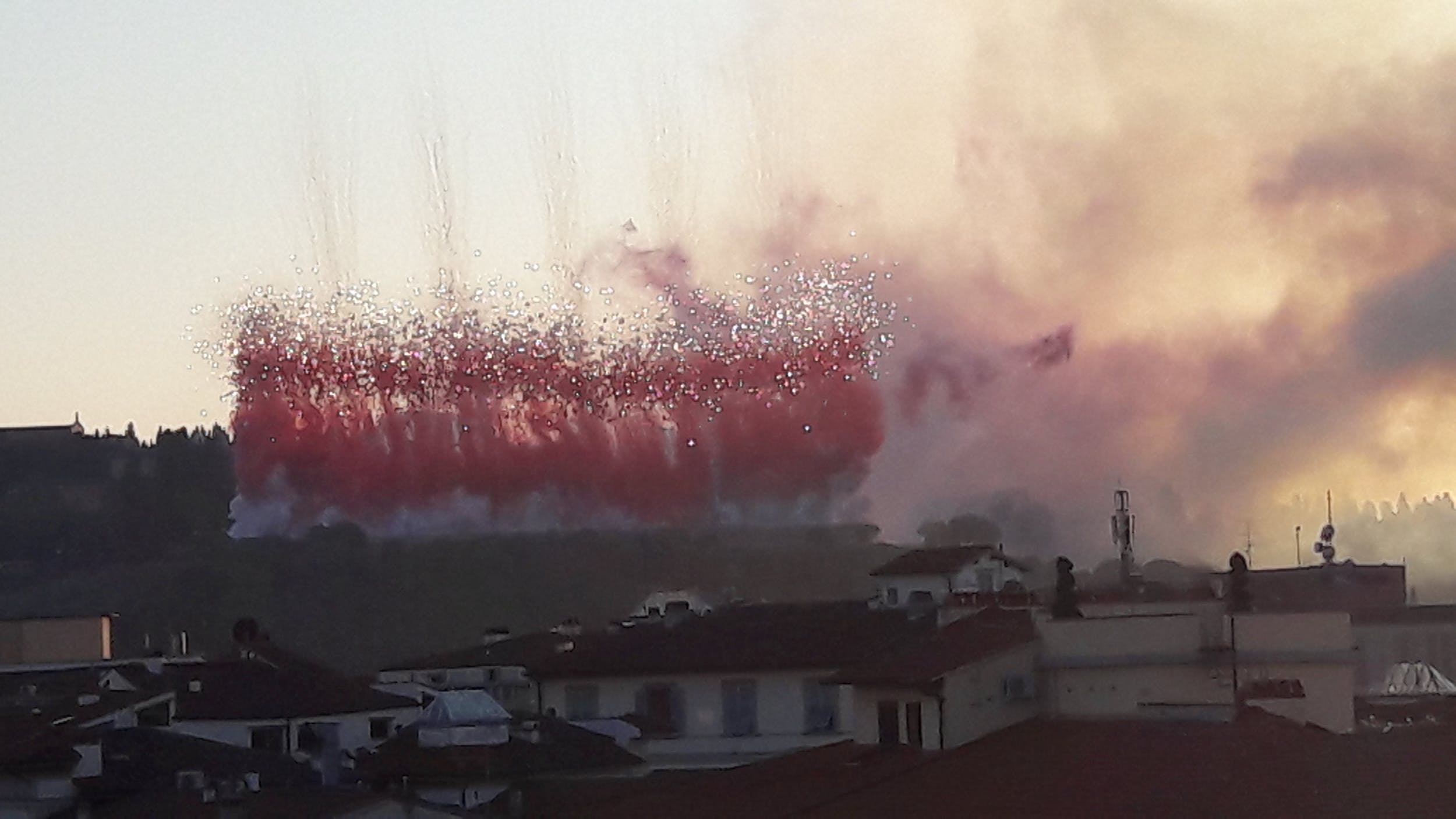