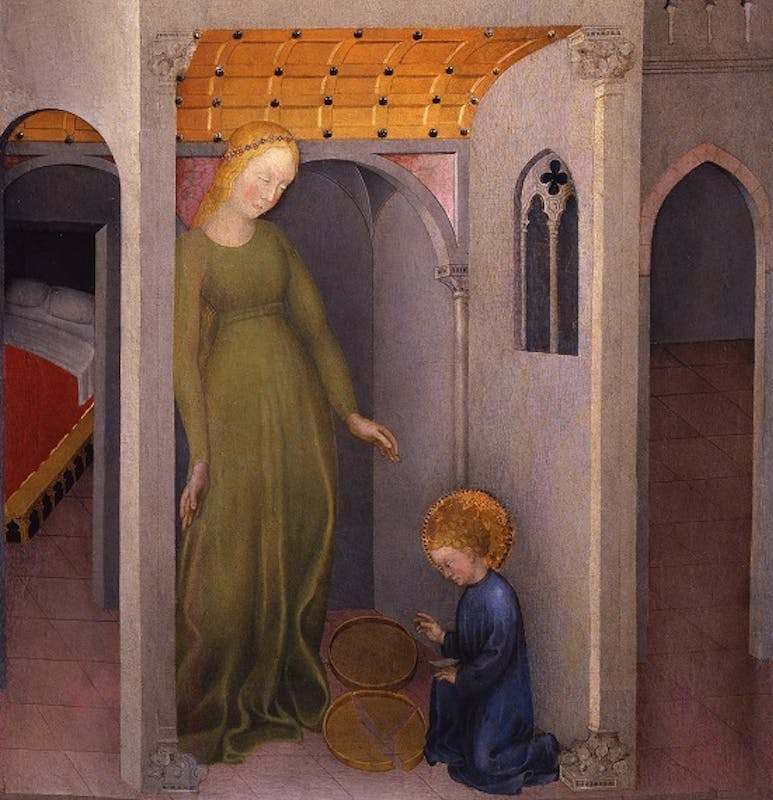 The painting shows an episode from St Benedict’s childhood, in which the founder of western monasticism's holiness was revealed at an early age. The child is shown blessing the terracotta sieve that his nurse has borrowed to clean some grain and which has accidentally fallen to the ground and broken. After St Benedict’s prayers, the sieve immediately becomes whole again. The scene takes place in a palazzo that features the late gothic architecture of northern Italy, with loggias and balconies, marble inlays, trilobed arches, and wood-paneled ceilings.  The scene is the first in a series of four episodes from the life of Benedict of Nursia, inspired by the Vita Sancti Benedicti written by Gregorio Magno, divided between the Uffizi Galleries and the Poldi Pezzoli Museum in Milan. They were probably part of an altarpiece dedicated to the saint, and despite their destination not being entirely known, they were most likely destined to the Benedictine order.

The three panels in the Uffizi Galleries were previously in Palazzo Portalupi in Verona in the 19th century, before passing to the collection of Henry White Cannon in Fiesole. The paintings were purchased by the Galleries in 1937.

The other stories of St. Benedict by Niccolò di Pietro at the Uffizi:

St Benedict and the Poisoned Wine