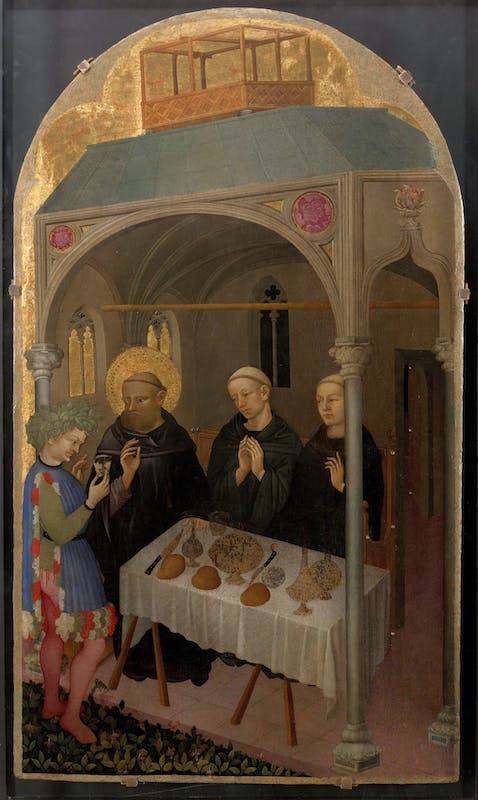 St Benedict, called to oversee a monastery without an abbot, sits down in the refectory together with two monks, dressed like him, in the black tunic and cowl that were characteristic of the monastic order he founded.  Benedict blesses a cup of poisoned wine held out to him by an elegantly dressed layman, who is also wearing a curious green hat.  The full table and the page's elegant clothing may allude to the monks’ relaxed customs before Benedict’s arrival, who has since restored the strict rules of the order, leading the monks to make an attempt on his life. However, the glass shatters by miracle after the saint’s blessing.

This scene is part of a series of four episodes from the life of Benedict of Nursia, inspired by the Vita Sancti Benedicti written by Gregorio Magno, divided between the Uffizi Galleries and the Poldi Pezzoli Museum in Milan. They were probably part of an altarpiece dedicated to the saint, and despite their destination not being entirely known, they were most likely destined to the Benedictine order.

The three panels, which are now in the Uffizi Galleries, were previously in Palazzo Portalupi in Verona in the 19th century, before passing to the collection of Henry White Cannon in Fiesole, and finally, being purchased by the Galleries in 1937.

The other two stories of St. Benedict by Niccolò di Pietro at the Uffizi: