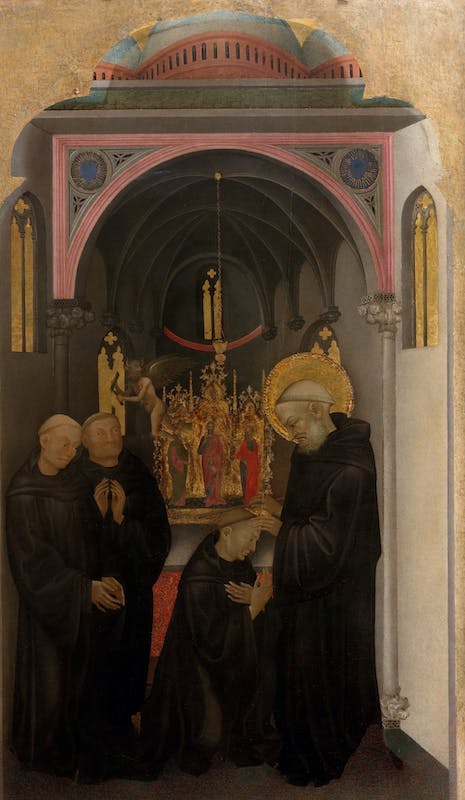 The story goes that St Benedict once came across a young monk who was distracted from praying by the devil. St Benedict exorcised the monk, hitting him repeatedly with a staff, as can be seen in the painting, in which the saint rests a thin stick on the head of the kneeling monk, freeing him from the demon’s presence. Two other monks watch on, astounded. In Niccolò di Pietro’s painting, the devil rushes off in such a hurry that he breaks the column of the mullioned window with his flight. This episode takes place inside a church, before the altar, under a triptych that shows the Redeemer and two saints, with a lamp hanging from the ceiling in front.

This scene is part of a series of four episodes from the life of Benedict of Nursia, inspired by the Vita Sancti Benedicti written by Gregorio Magno, divided between the Uffizi Galleries and the Poldi Pezzoli Museum in Milan. They were probably part of an altarpiece dedicated to the saint, and despite their destination not being entirely known, they were most likely destined to the Benedictine order.

The three panels in the Uffizi Galleries were previously in Palazzo Portalupi in Verona in the 19th century, before passing to the collection of Henry White Cannon in Fiesole. The paintings were purchased by the Galleries in 1937.

The other two stories of St. Benedict by Niccolò di Pietro at the Uffizi:

St Benedict and the Poisoned Wine