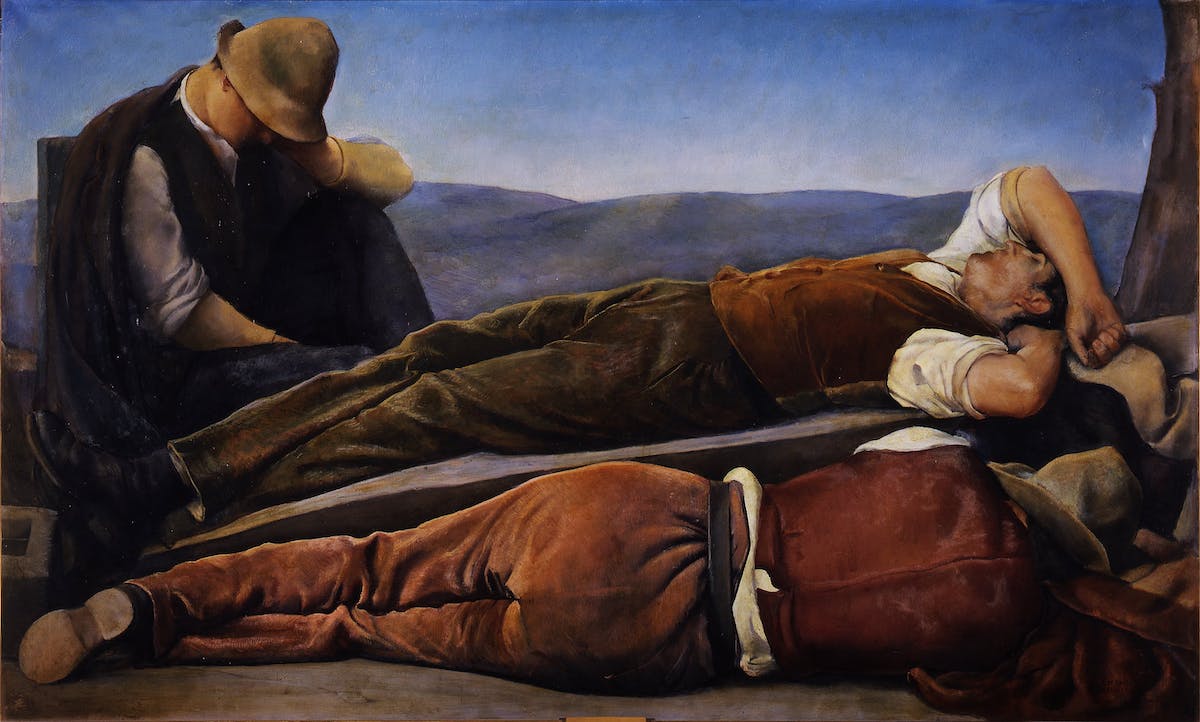 Like Afternoon in Fiesole [https://www.uffizi.it/opere/autoritratto-bacci ] this painting skilfully bears witness to the passionate and definitive turning point experienced after the First World War by Baccio Maria Bacci in the wake of the ‘return to order’ and of the recovery of tradition, strongly recommended in these years as the only way of intensely renewing Italian art.

This turning point is all the more evident in this subject, dear to Bacci and already proposed in a painting from 1915, with a similar title but a blatantly futuristic style (Quarrymen at rest). As he relates in his Diary (1919), Bacci loved to walk from his studio in Fiesole, in the hills around Florence, to as far as the quarry of Mount Ceceri where, since ancient times, pietra serena, a kind of sandstone, had been quarried: it was a place defined by the painter as an “enchanted island” where he would find peace and inspiration in solitude. There he was able to entertain himself and watch, as well as chat with quarrymen and stone masons alike, simple, modest people, but men with a genuine outlook on life, and a pride in their artisan know-how, handed down from father to son.

The practice of a manual trade and the sincere and direct tribute to the Italian cultural tradition are the foundations and inspiration behind a work like this one. The monumental figures of the workers are positioned in the space of the painting, as if in a fresco from the early Renaissance, frozen in a atmosphere of calmness and deep harmony with the rough surrounding countryside. The painting style is lean, spanning long areas of colour, all based on dry, brownish tones, a clear tribute to the style of Masaccio. The strong compositional unity and the unique diagonal direction, emphasised by the figure in the foreground, who is lying down with his back to the spectator, are instead allusions to Caravaggio, the value of whose work was strongly reconsidered in these years thanks to the exhibition about the art of the 1th century organised in Palazzo Pitti by Ugo Ojetti in 1922.

The work was exhibited at the 15th Venice Biennale in 1926, where it was selected to be purchased by the commissioners of the Modern Art Gallery, Ojetti, Maraini and Pelagatti, together with a similar work for composition and references to ancient art: Apostles by Felice Carena.