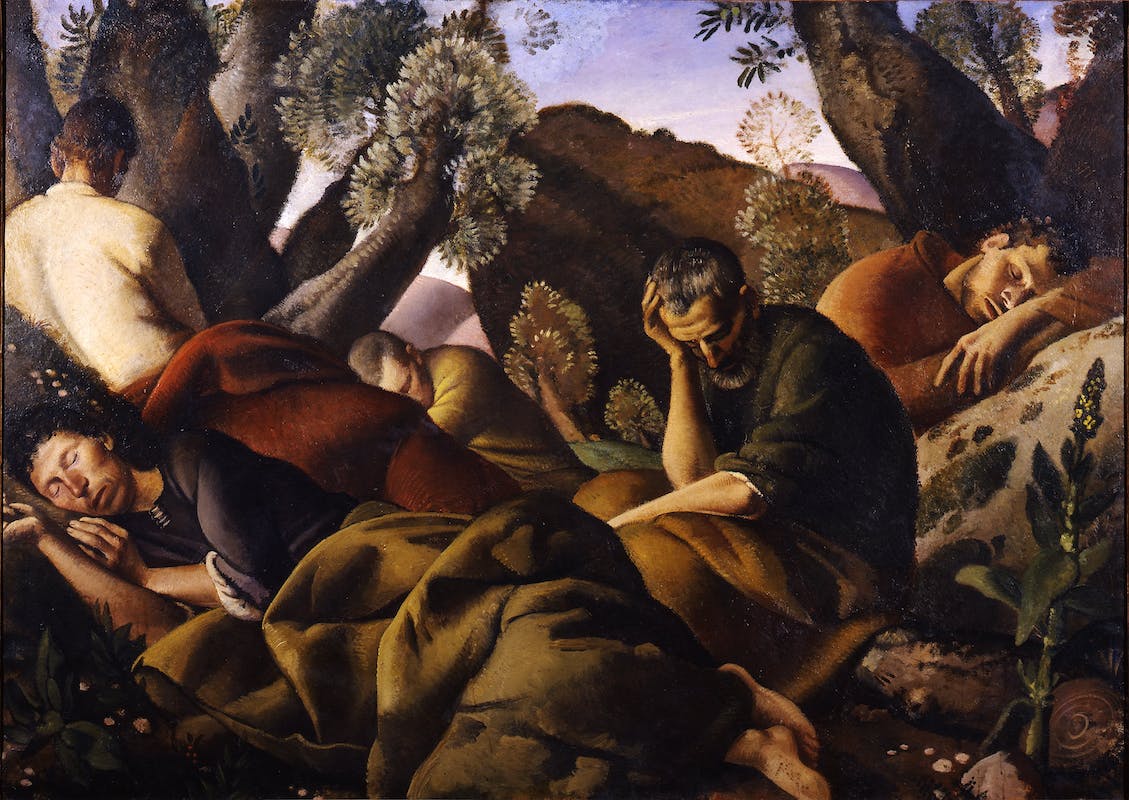 After the Last Supper, Christ retires in prayer with the apostles to the Garden of Olive Trees, but the apostles, overcome by tiredness in the night, fall asleep. In the foreground, James, Peter and John. In the background of the painting, the strong olive trees from which the Jewish place name Gethsemane derives are visible.

This painting was exhibited at the Venice Biennale in 1926, where Carena displayed no less than 50 works in a solo exhibition. Ugo Ojetti, Antonio Maraini and Mario Pelagatti, members of the Purchasing Committee of the Modern Art Gallery in Florence, decided to invest the impressive sum of 37,000 lire in this work, defining it as “a moving and impressive vision”. The Commission’s opinion was due to the ability shown by Carena in combining various references to the art of the past in a modern expression of style: in fact, artists such as Tintoretto, Giovanni Bellini, or Caravaggio are presumed to have been Carena’s models for the composition of this subject. The parallel with The quarrymen of Mount Ceceri painted by Baccio Maria Bacci, also purchased at the Biennale in 1926, is interesting: in the Garden of Olive Trees the apostles are dressed as modern workers, a condition strongly characterised by their facial features, and the marks left by time and hard work.

Contemporary critics were particularly impressed by Carena’s ability to speak clearly and directly to the spectator: the religious subject, with all its dignity intact, is set in a genuinely everyday atmosphere; the monumentality of the apostles is tempered by portraying them as simple human beings, sketched with vivid, realistic details (their large workers’ hands, suntanned faces, shaggy beards and rough, coarse clothes). And they are placidly resting in a garden also painted in such a way as to depict nature as it appears in real life.