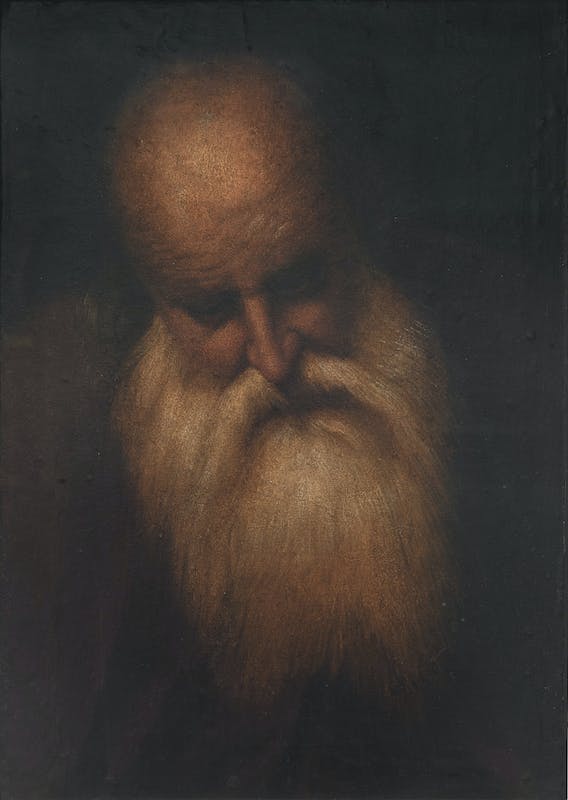 This small painting is a portrait study of the head of an old man, depicted according to the iconographic standards of saints and philosophers. The subject’s bald head and long white beard are, in fact, typical attributes of these characters, as well as his curved shoulders and downward-facing eyes. These traits connote an attitude of meditation, repentance,  and spiritual or intellectual reflection. The naturalistic rendering of the figure is such that, just by looking at it, the viewer can almost feel real tactile sensations. One seems to perceive the smoothness of the hairless head, the slight ripple of  wrinkles on the forehead and around the eyes, the softness of a beard that seems to have the consistency of cotton-wool, and the roughness of the modest fabric that he wears.

Particularly significant is the use of color and light: the figure emerges from a black background due to a clever chiaroscuro contrast, created with a subtle, almost flickering luminosity, which gives the whole picture a sort of atmospheric instability.

Cited in the inventory of the Uffizi of 1890 as a work by Pordenone, it was then attributed to Jacopo Bassano, and finally to Camillo Boccaccino (1501-1546). This hypothesis seems to be confirmed by the stylistic similarities of the painting at the Uffizi with two other works executed by Boccaccino at the turn of the first and second quarters of the sixteenth century: The Eternal Blessing at the Civic Museum of Cremona and the Isaiah, a canvas originally used as the door of the organ of the church of San Maria di Campagna in Piacenza, which is now exhibited in the Picture Gallery in Piacenza’s Palazzo Farnese.

Son of the Emilian painter Boccaccio, Camillo Boccaccino began his artistic journey following the example of masters such as Raphael, Correggio, and Pordenone. He later adopted the new refined Mannerist experiments of Parmigianino and Giulio Romano, without abandoning the preciousness of Titian’s Venetian coloring, which he learned during his youth.
His untimely death unfortunately prevented Camillo from fully developing his artistic capabilities, which would probably have led him to far greater fame than he enjoys today.