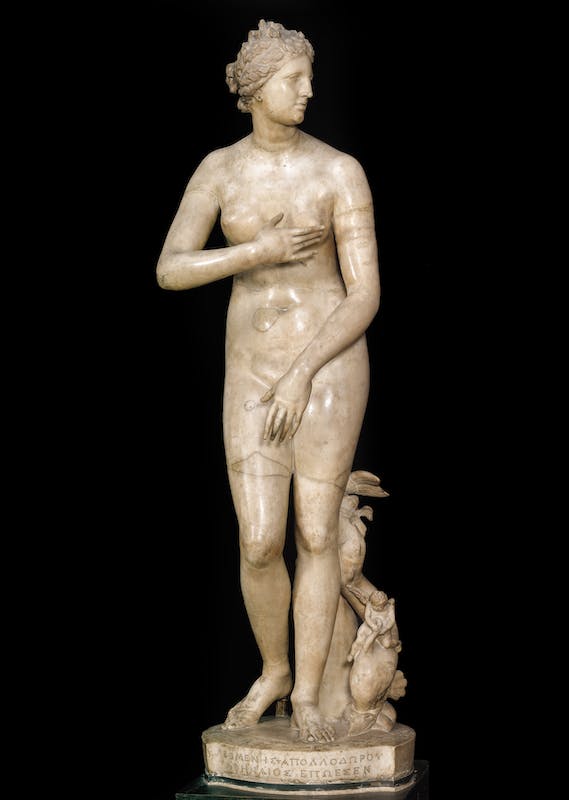 According to Pirro Ligorio, the statue was found in Rome, near the Trajan Baths, inside the vineyard of Bishop of Viterbo, Sebastiano Gualtieri. It immediately became part of the prelate’s collection and in 1566, it was bought by Alfonso d’Este. In 1575 it was sold to Ferdinando de’ Medici, who decided to export it to the collection of antiquities at Villa Medici in Rome. The statue was kept in the sumptuous Roman residence for over a century. In 1677, it was moved to Florence, together with masterpieces such as the Knife Grinder and the Wrestlers. These famous works were exhibited in the Tribuna, the most precious space of the Uffizi, and the Venus was elevated to symbolic representation of the Florentine museum in its entirety. The prestige of the statue can be seen in subsequent events and the successive collecting history. In 1802, Napoleon ordered the transfer of the statue to Paris. The French period lasted until 1816, when the statue was relocated back to its original location in Florence.

In a rare circumstance for ancient statues, the Venus has a known author. The base podium in fact bears his signature, Cleomenes, son of Apollodorus, a sculptor working in Athens during the 1st century B. C. The work is therefore datable to the period between the 2nd and the 1st century B. C.  Recent tests have brought to light traces of the original colours: there are in fact obvious remains of gilding on the top of the hair, cinnabar on the lips and Egyptian blue on the base.

The Medici Venus in the Tribune of the Uffizi