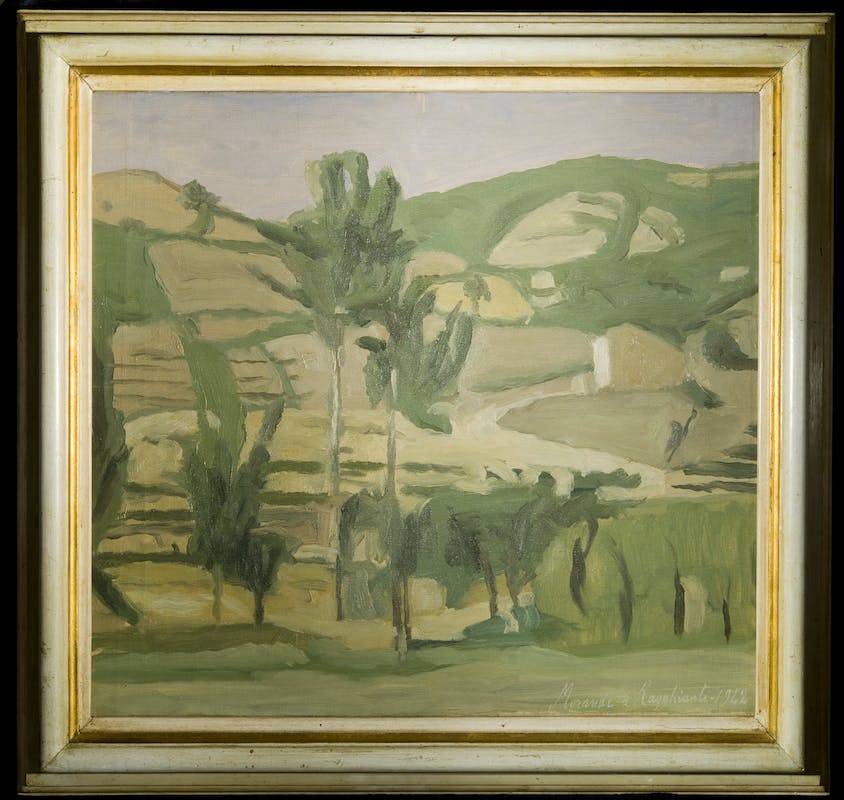 “Morandi a Ragghianti 1942” on the bottom right and on the reverse side of the canvas.

Landscape at Grizzana, with a dedication on the back reading “Morandi a Ragghianti 1942”, is testimony to the close friendship between the artist and the well-known art critic, Carlo Ludovico Ragghianti, who was also a member of the Buying Commission for the Gallery of Modern Art at Pitti Palace from 1960-70. The dedication highlights the painting’s symbolic value, created during the period in which Morandi took refuge in the Apennines of Emilia to escape the bombings of Bologna: Ragghianti, an anti-fascist and founder of the Action Party, was arrested in Modena in March 1942, imprisoned and then arrested again in 1943, something that also befell Morandi that very same year.

Like the famous repeated still life themes, the Landscape at Grizzana is a balanced formal encapsulation of decomposition and volumetric recomposition, with cubes used by Cézanne and the suspended perception of space used by Piero della Francesca, rediscovered by the circle of intellectuals who reinterpreted traditional Tuscan paintings in Valori Plastici magazine.

Only a few materials were used to create this painting: overlaid greens outline the shapes of trees and hills thanks to a few areas of light and shadow, in the midst of which the silhouette of a cube-like house and pathway can be distinguished. These subjects were captured in real life, before being transferred to a careful study, depicted as if they belonged to the “living world” on the hillside of the Apennines of Bologna.