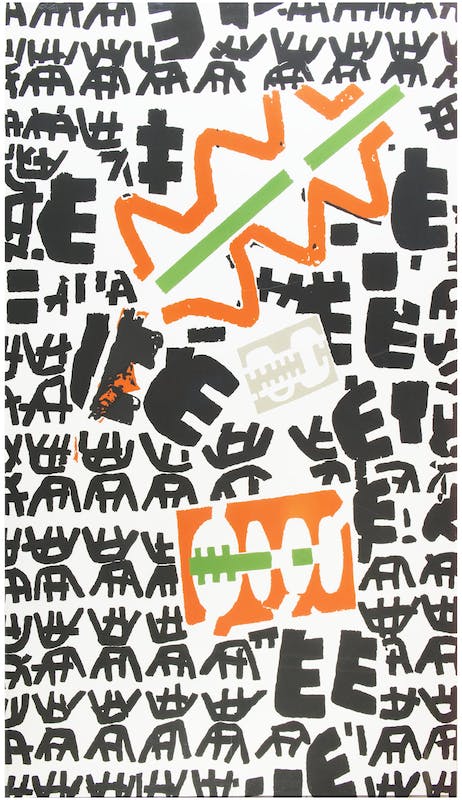 Capogrossi turned to abstractionism around the 1950s, after a long career as a figurative painter. He had begun painting in the twenties under the guidance of Felice Carena, matured in the Roman school of tonalism in the following decade and transited in the post-war period to neo-Cubism. Since then, a letter-similar character has characterised his entire production, becoming the main, instantly recognisable expression of his art. It is a three-pointed sign (a sort of rounded E) that the artist repeats in infinite combinations and with ever-changing rhythms, varying sizes, numbers, expansions and contractions, alignments and interruptions: a sort of binary code through which he overcomes the appearance of nature to represent an inner organisation of the space. The prevalence of black and white in his works also responds to this logic of dominance of signs, as does the rigour of the flat background, although here at times it is blurred slightly by the silkscreen printing technique.

"He is the most varied, so furiously equal to himself, the most varied painter there is in the world," Giuseppe Ungaretti wrote of Capogrossi in 1969, also observing how his "qabbalistic locks with perpetual closure" afford access to the secrets of the universe to those who know how to open them.

The work was printed in 1970 by the Edizioni Il Naviglio of Milan, which belonged to the gallery of the same name headed by Carlo Cardazzo, a point of reference for research in the area of informal art, together with its Venetian sister gallery, Galleria del Cavallino. The label on the back certifies the print run of 120 copies in four colours and the destruction of all the matrices and printing proofs, thus emphasising the uniqueness of that series of silkscreen prints. It was donated by the artist to the collections of the Gallery of Modern Art in 1970, the year when he participated in the second International Graphics Biennial in Florence. In 1971 it became one of the leading works in the exhibition "Nuovi termini di riferimento per il linguaggio artistico" (New terms of reference for the artistic language) which exhibited, with a didactic slant, a group of works acquired by the Gallery of Modern Art for the purpose of updating its collection. The aim was to educate the city about the new expressions of contemporary art but also to make it aware of the endemic lack of exhibition spaces in the museum.