The myth of Perseus and Andromeda

In a single painting, Piero di Cosimo portrays several scenes from Ovid's tale. The story unfolds in a circular fashion from the top-right hand corner, which depicts Mount Atlas.

Having killed Medusa, Perseus asks Atlas to shelter him, but the Titan refuses. Offended, Perseus "raised [...] the unkempt horror of Medusa's head. Atlas became a mountain just as large as the man had been. His head was now the mountain's summit" (lines 657-663).

Perseus continues his journey, flying over different parts of the world. He has winged sandals, the Helm of Hades which makes him invisible, the shield of Athena which gleams like a mirror, and the adamant sickle of Hermes. He eventually lands in Ethiopia.

Perseus sees Andromeda offered in sacrifice to a sea monster

Here, he sees a young girl tied to a bare tree: "He would have thought that she'd been carved from stone were it not for the breeze that stirred her hair and for the warm tears flowing from her eyes" (lines 673-675). She is Andromeda, the daughter of the King of Ethiopia Cepheus, who has been offered in sacrifice to a sea monster as a divine punishment for her mother Cassiopeia's conceit: she in fact dared to claim that she was the most beautiful one among the sea nymphs Nereids.

The two figures embracing allude to the words that Perseus says to Andromeda: "These chains don't do you justice; the only chains that you should wear are those that ardent lovers put on in their passion" (lines 678-679).

The sea monster is coming

"The sea erupted with the roar of a great beast who rose up as he breasted the wide water" (lines 687-690).

Andromeda's father Cepheus (wearing a white turban), her suitor Phineus (wearing an exotic gown of red feathers), and her mother Cassiopeia (wearing a blue cloak and covering her face in despair) all watch on helplessly.

Perseus fighting against the monster

Smitten with Andromeda, Perseus offers to free her in exchange for her hand in marriage. He lands on the monster, wounds it, and prepares to deliver the fatal blow.

Perseus frees Andromeda and marries her

"Applause reverberates along the shore and from the mansions of the gods above. Cepheus and Cassiopeia [...] rejoice in their new son-in-law, and hail him as prop and savior of their family" (lines 735-738). Perseus marries Andromeda. A group of revellers waves laurel branches, a symbol of the peace that he has brought them.

"And everywhere are lyres, flutes, and singers singing songs that make their argument for happiness" (lines 760-763). The black man is playing an unusual instrument consisting of a flute with three holes, the galoubet, and a stringed tambourine, typical of Gascony and the South of France.

Perseus builds three votive altars to the gods Mercury, Minerva and Jupiter, sacrificing a calf, a cow and a bull to them respectively.

Perseus rests Medusa's head on a bed of seaweed. As soon as it touches the blood of the Gorgon, the seaweed becomes petrified, turning to coral.

The painting in the Medicean collections

The painting originally hung in the bridal chamber of Filippo Strozzi the Younger. It then became part of the Medici Collections, and it was displayed in the Tribuna of the Uffizi in 1589. Various symbolic references to the Medici can be identified in the work.

Allusions to the Medici family

Here we find the emblem of the Medici, a lopped laurel branch (or "broncone") which is still capable of regenerating, like the Phoenix. This is an allusion to the return of the Medici to the city in 1512 after their exile, a return which was supported by Filippo Strozzi, who had married a member of the Medici family in 1508.

Perseus and the Medicean allegory

In the middle of the bush, we can just make out Perseus's shield with its characteristic diamond tip. This was another emblem of the Medici at the time of Lorenzo the Magnificent, when it was accompanied by the motto "SEMPER".

"Piero never made a more lovely or more highly finished picture than this one" (Giorgio Vasari, "The Life of Piero di Cosimo") 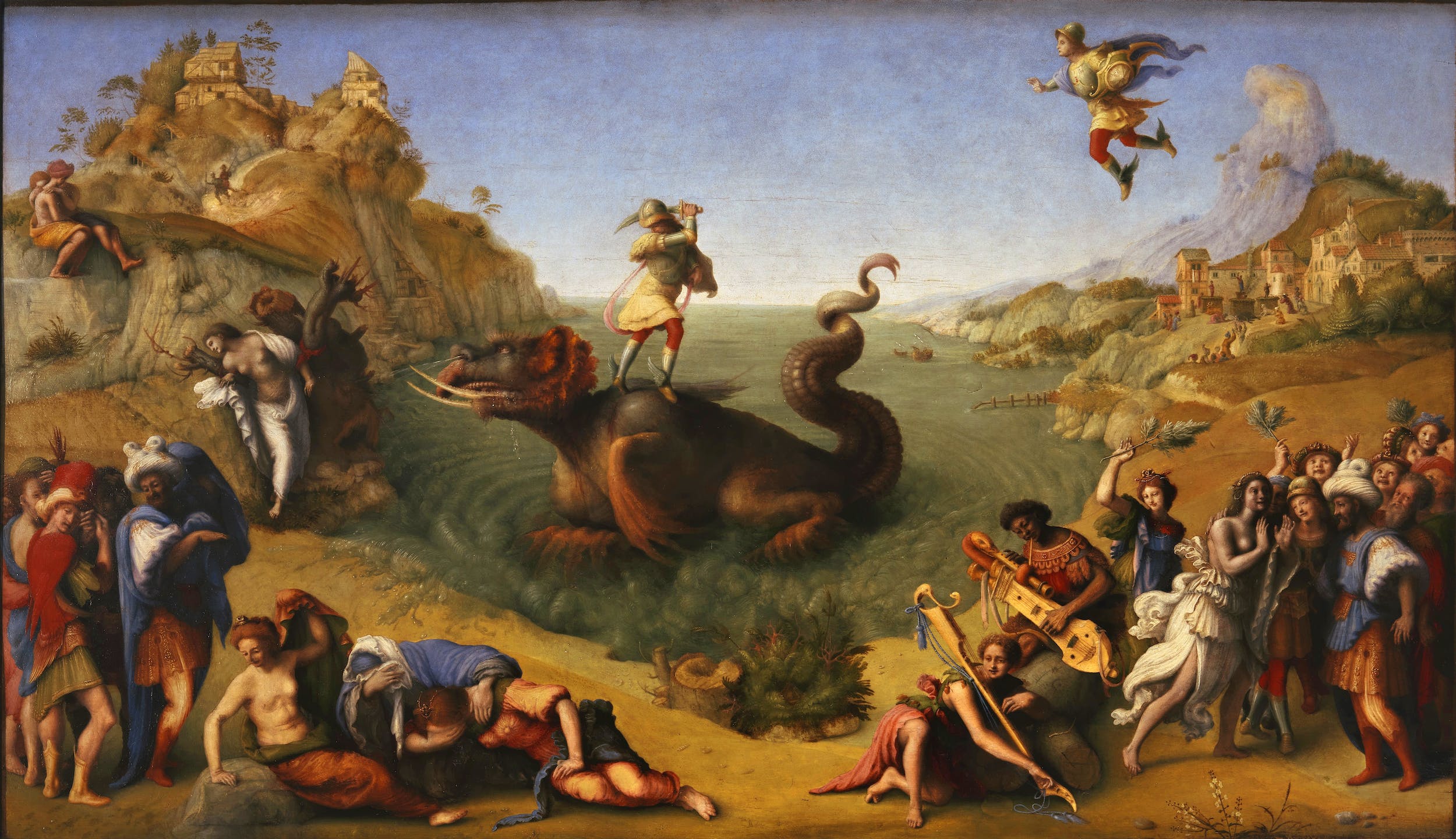 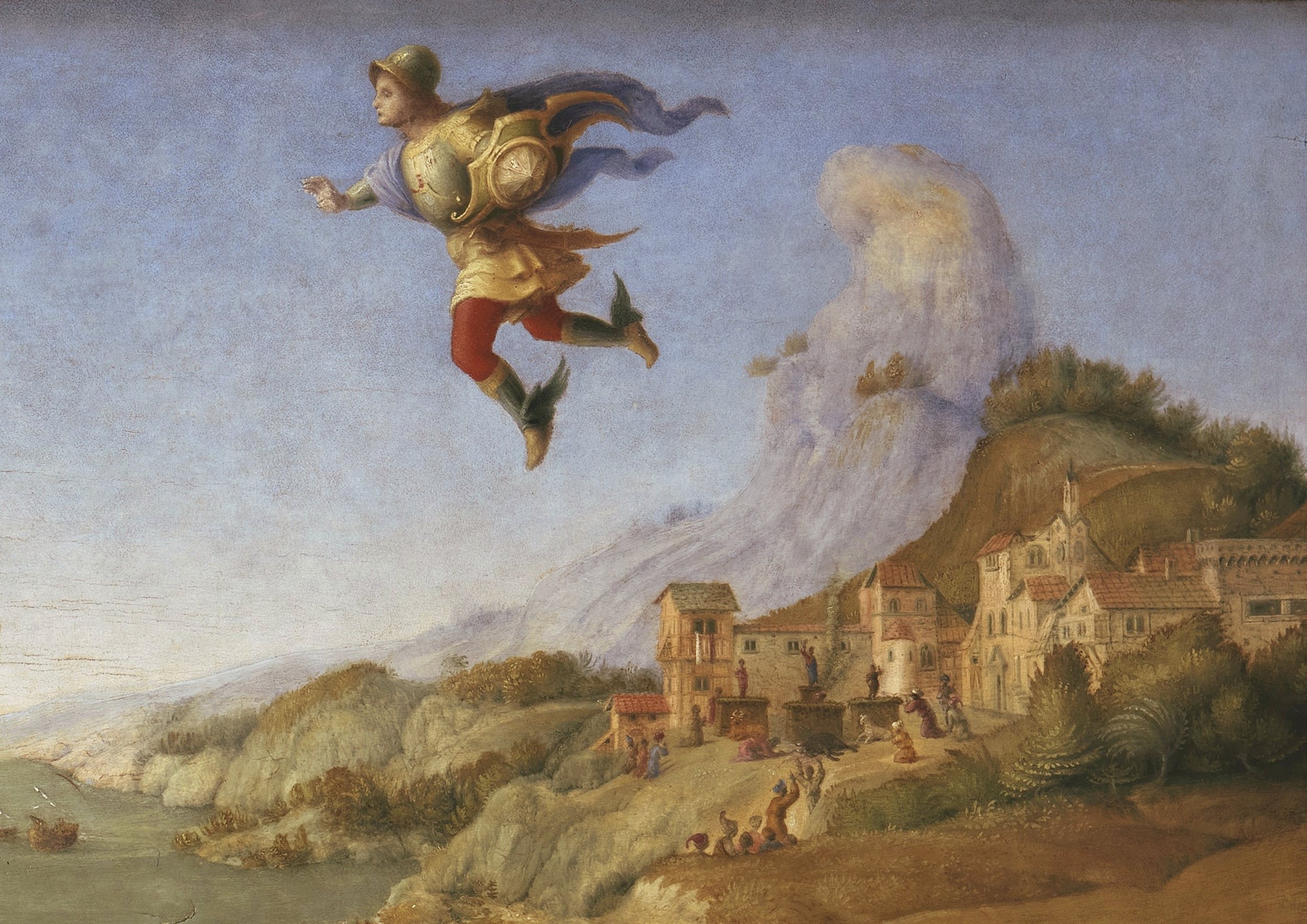 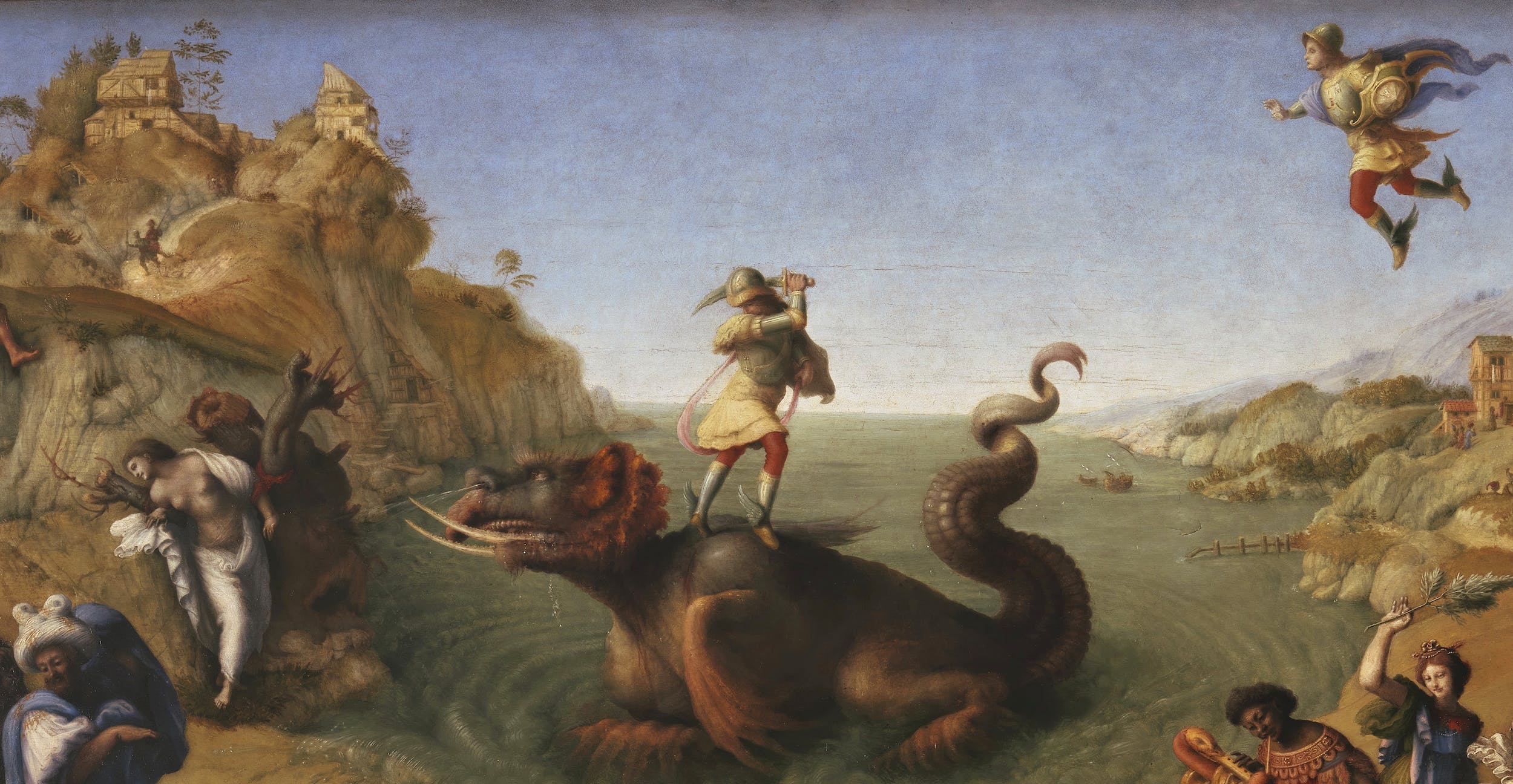 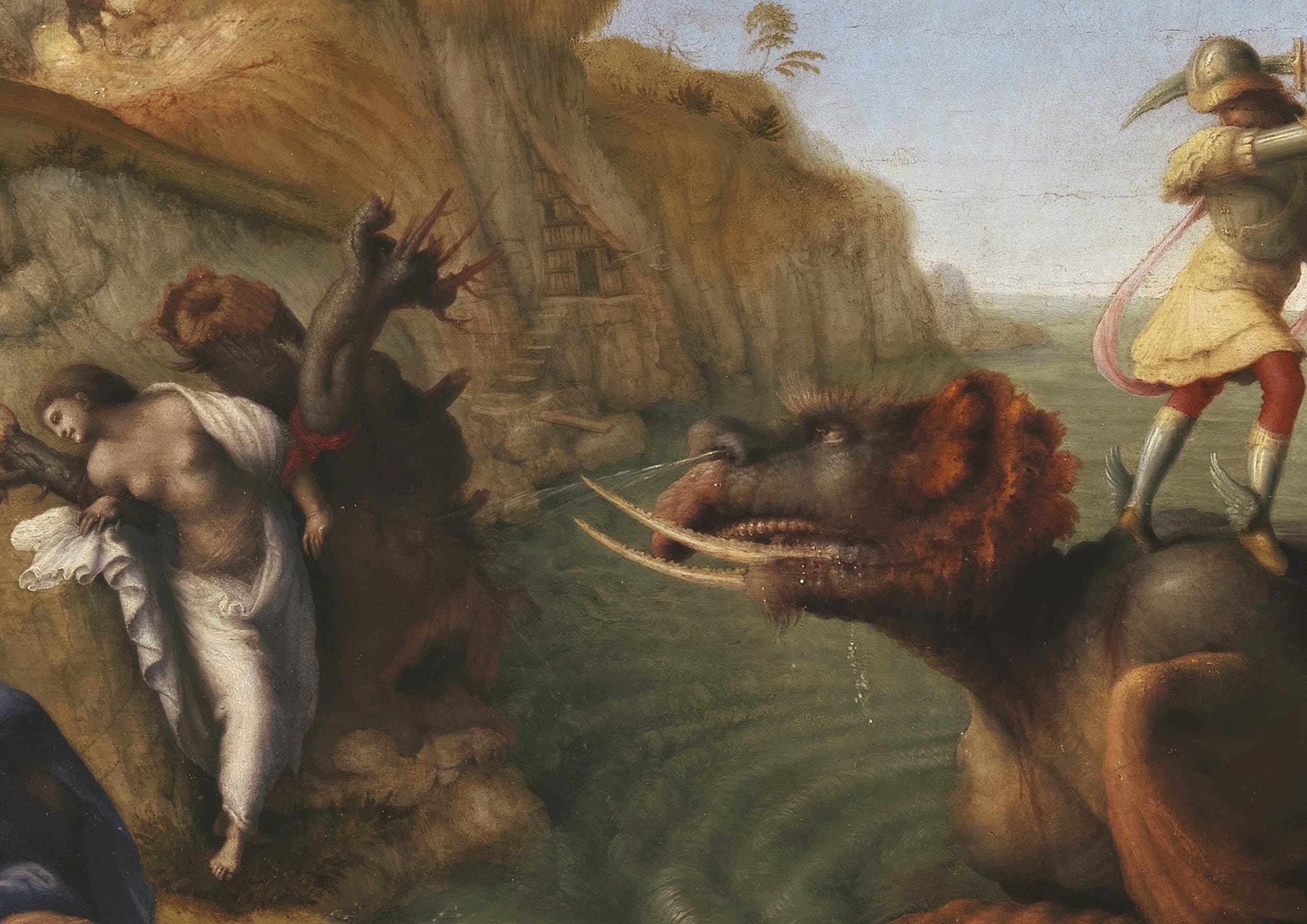 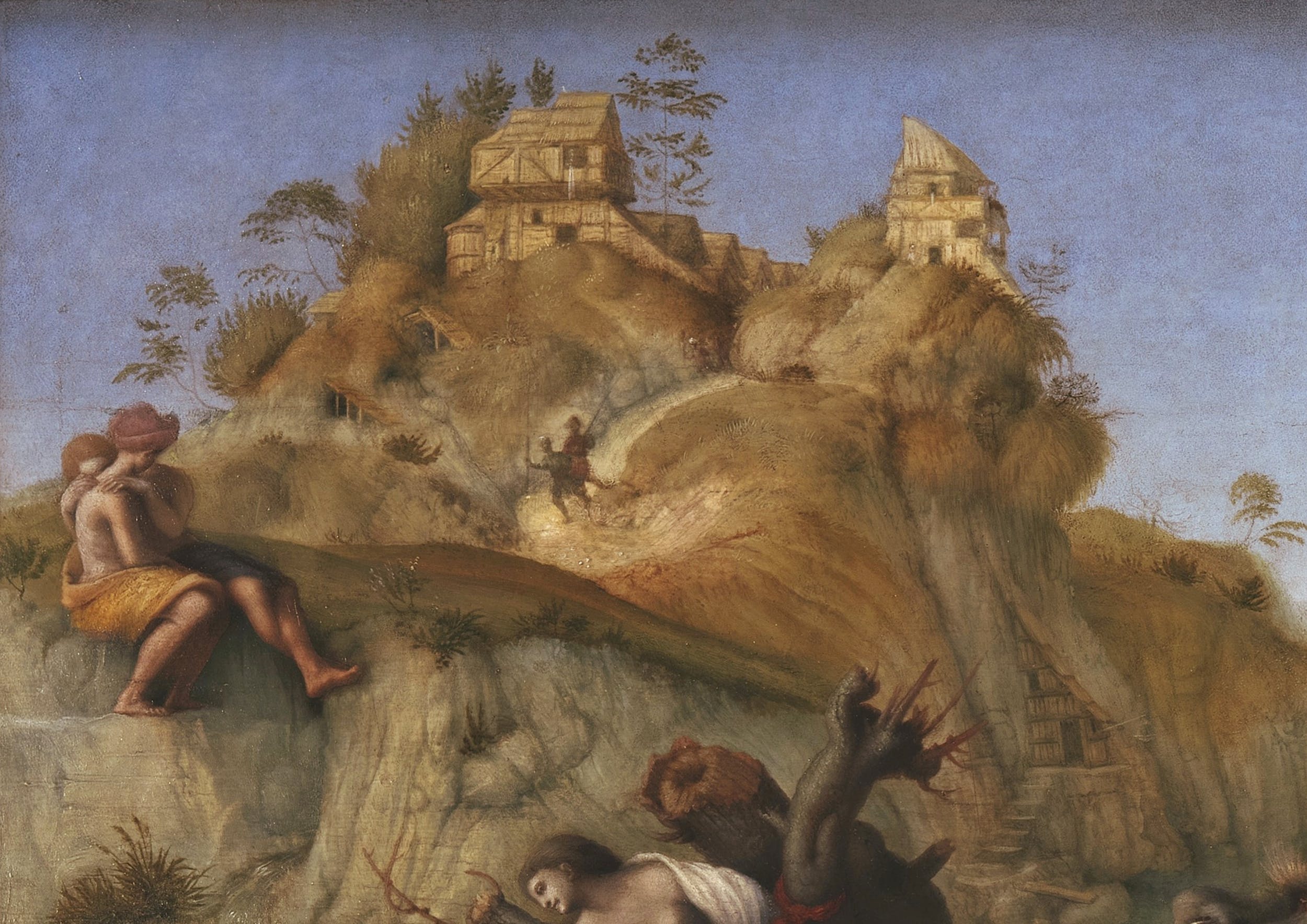 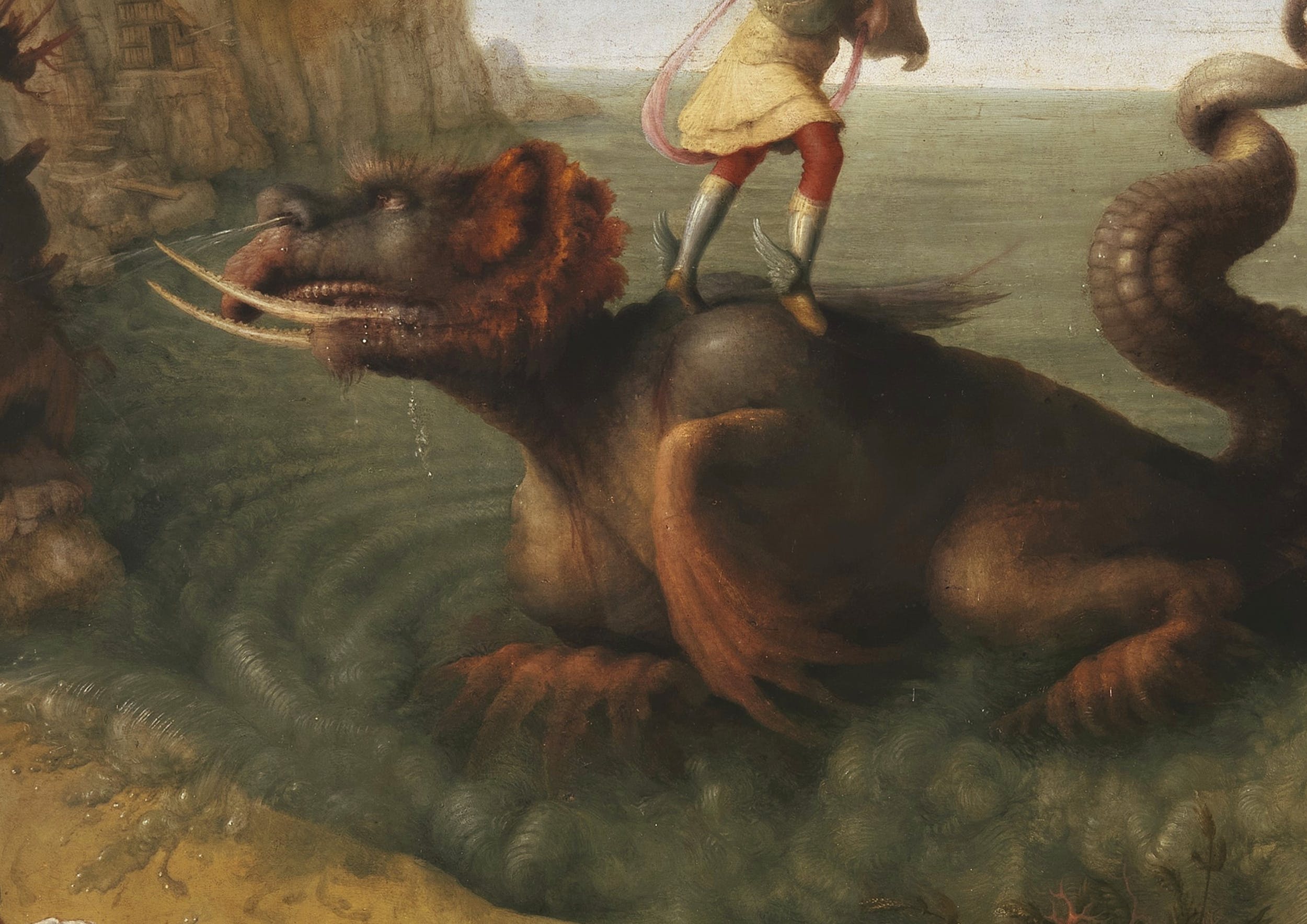 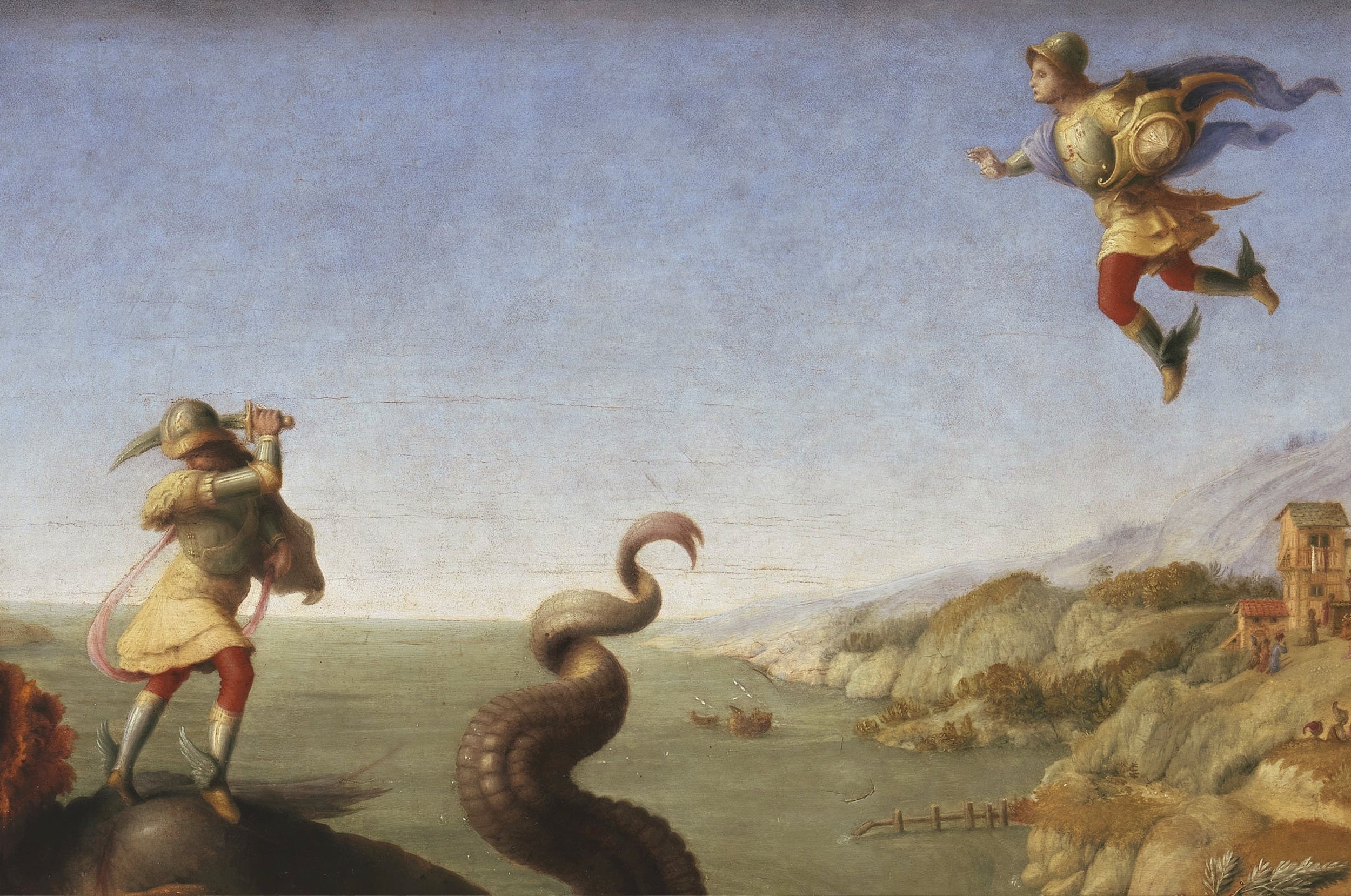 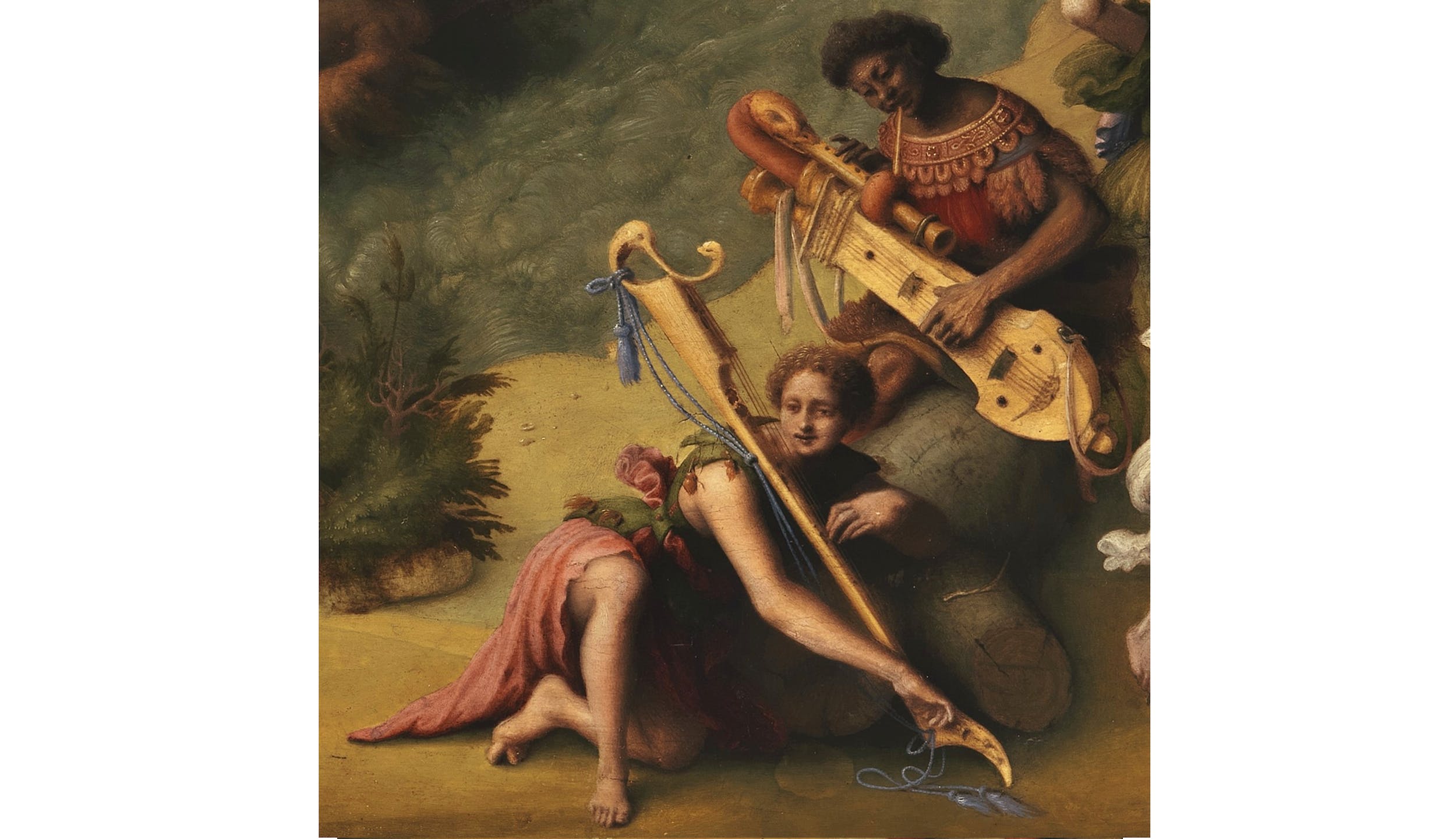 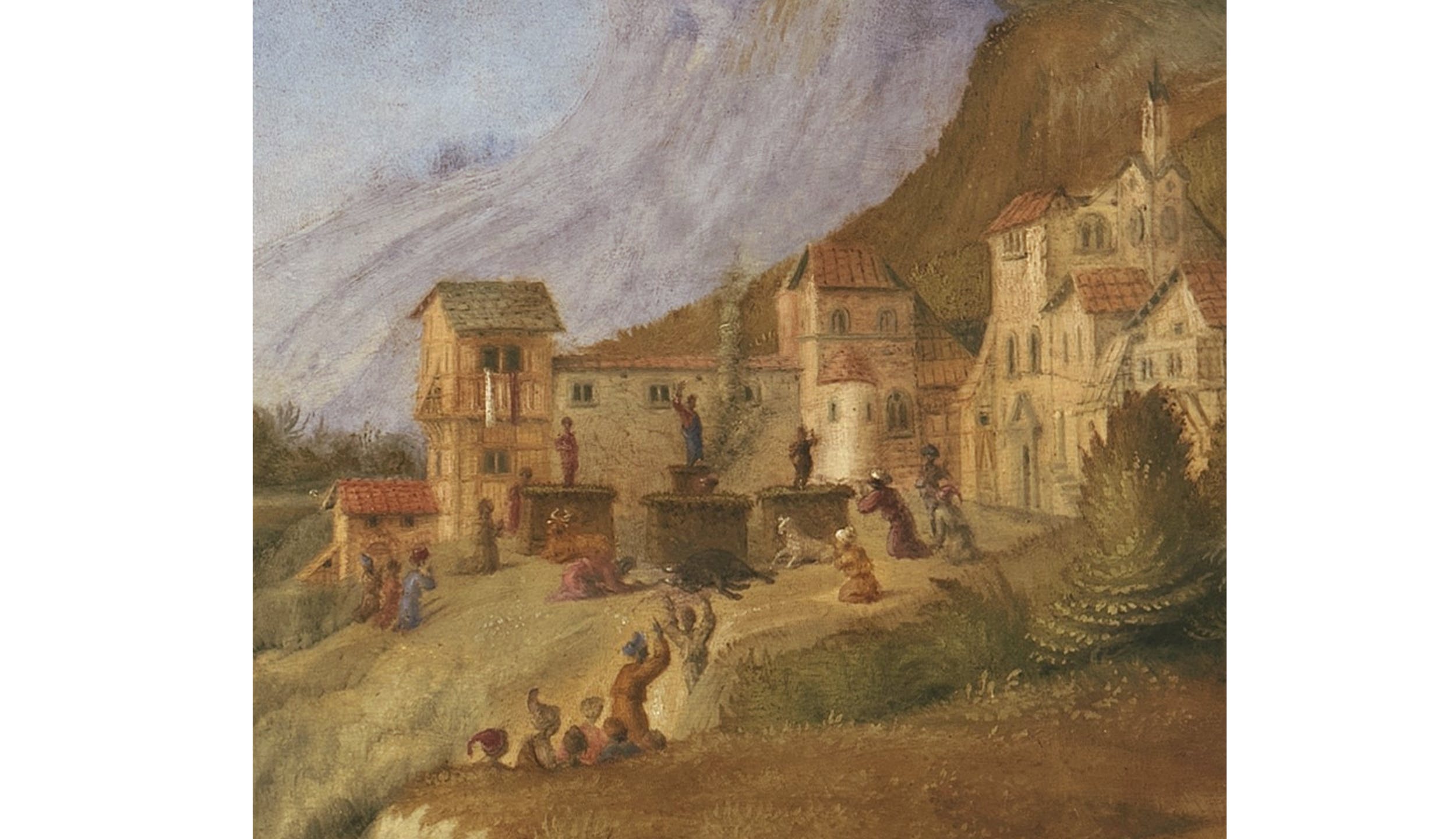 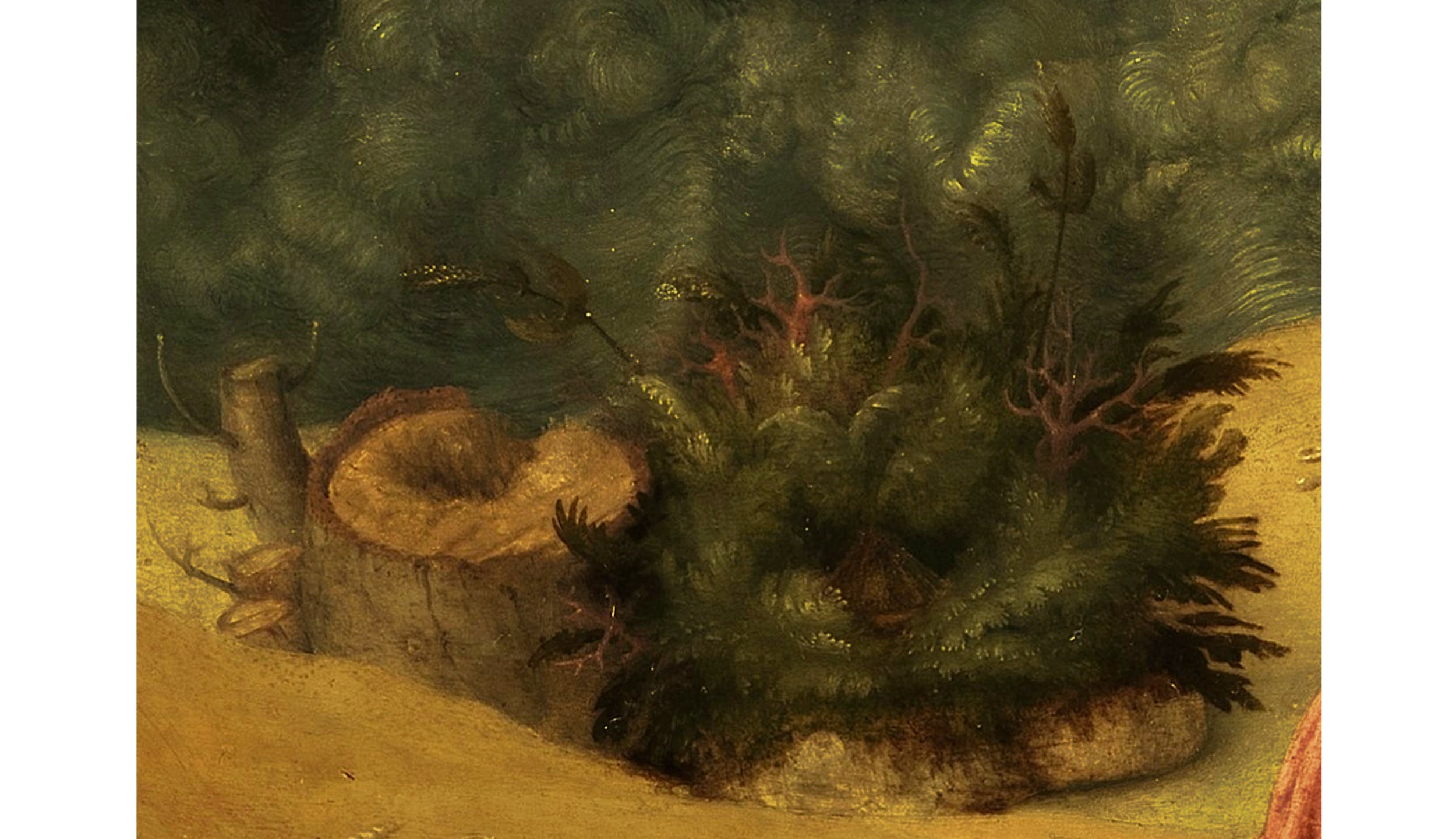 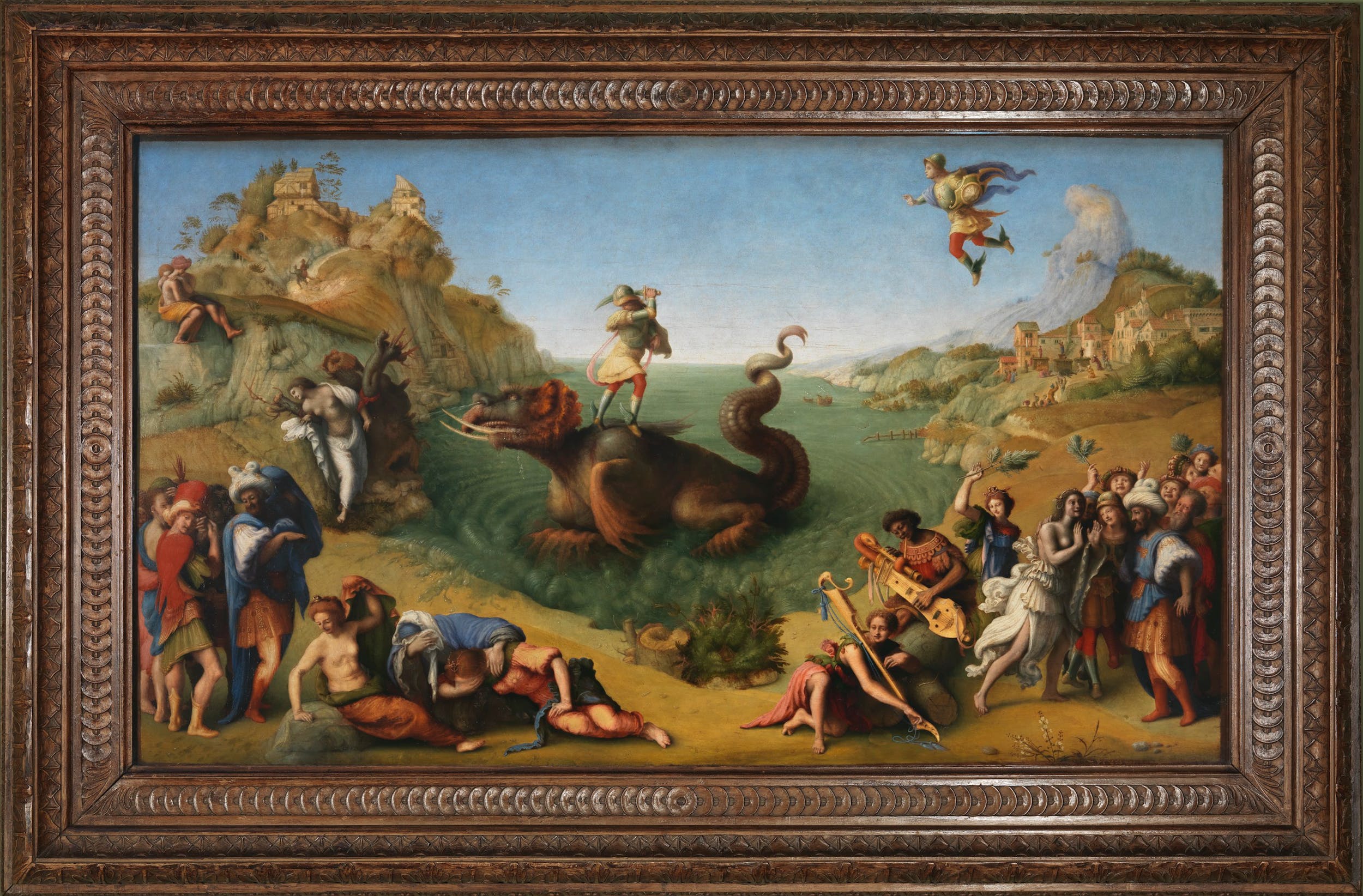 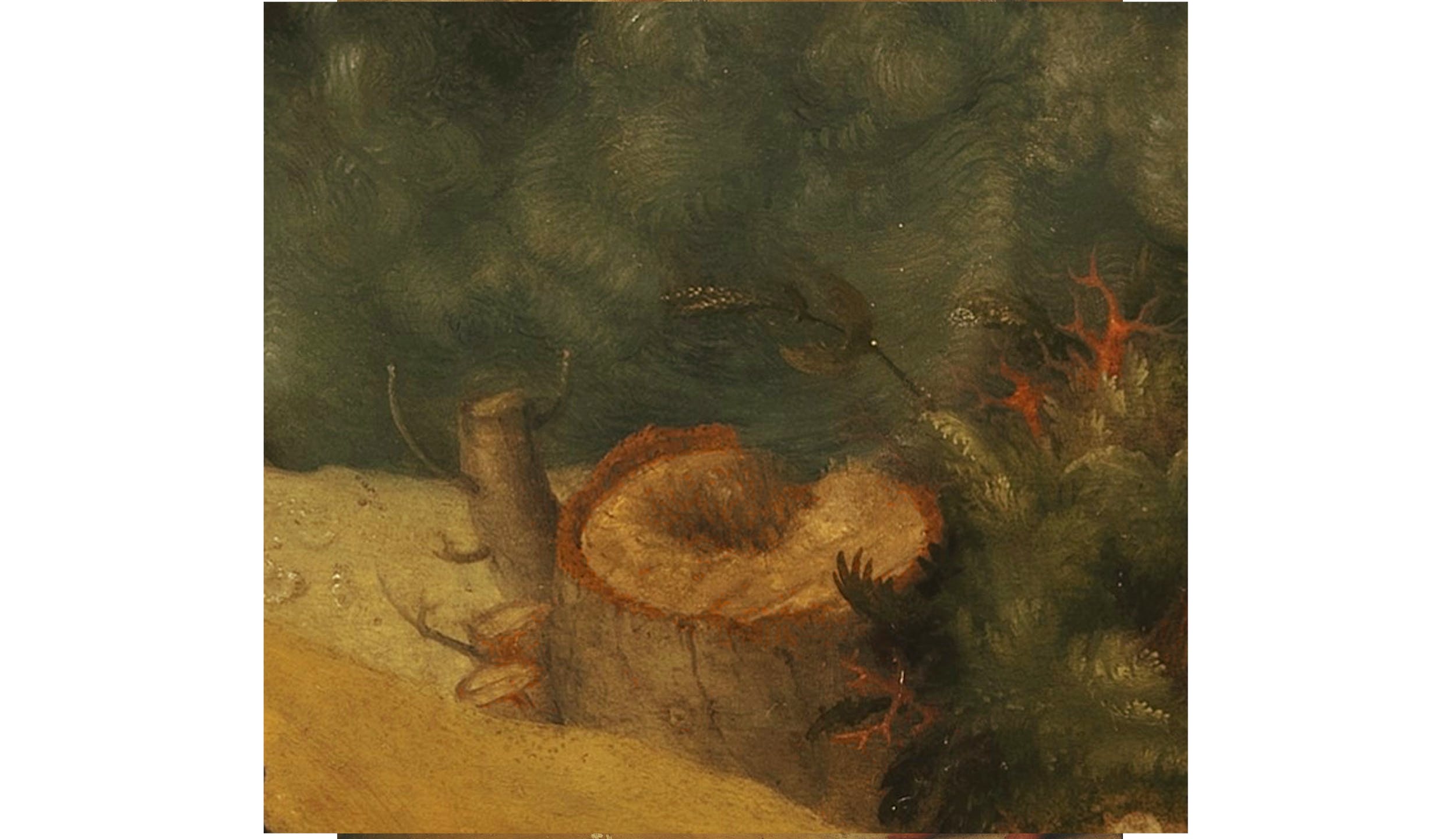 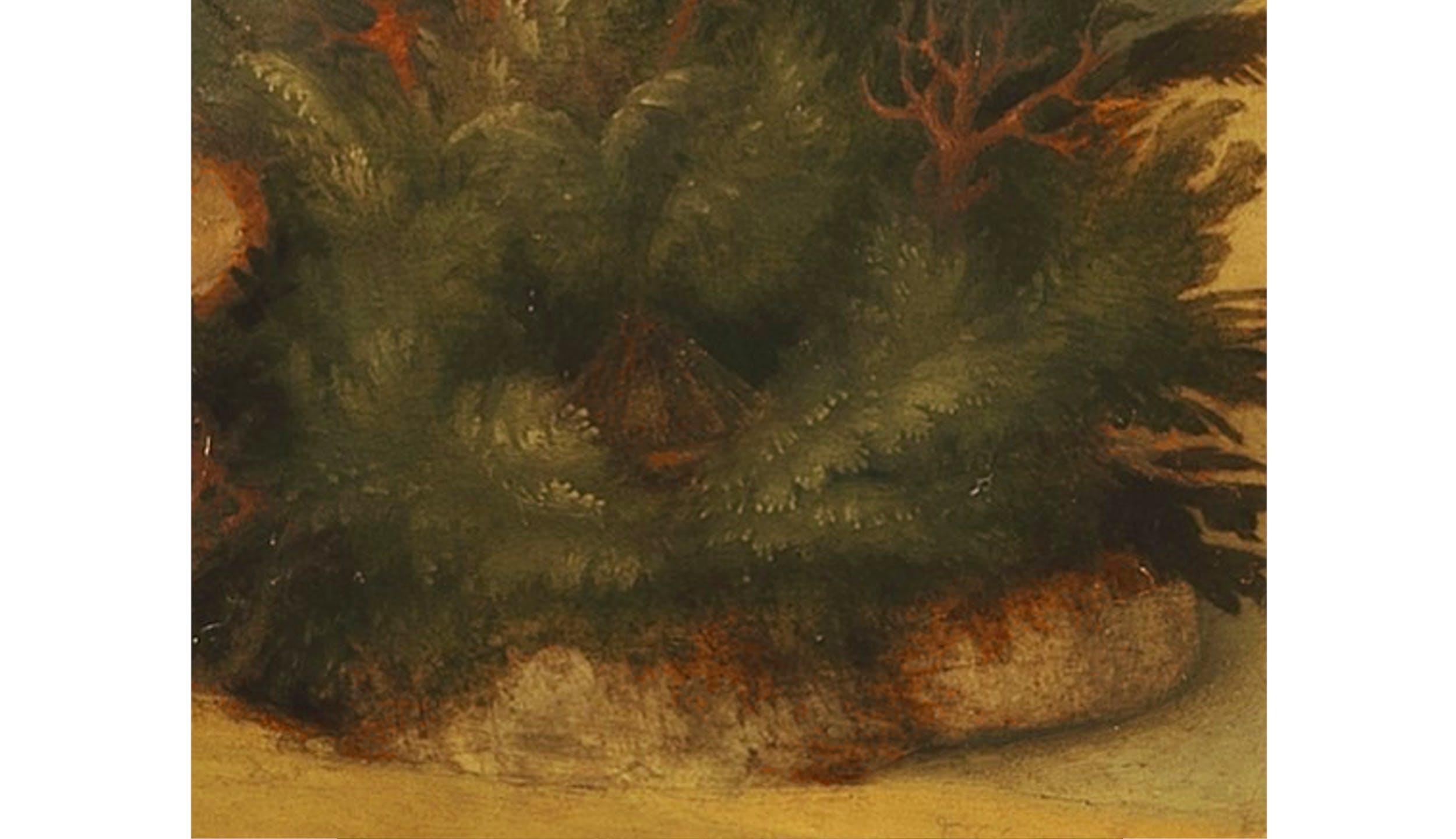 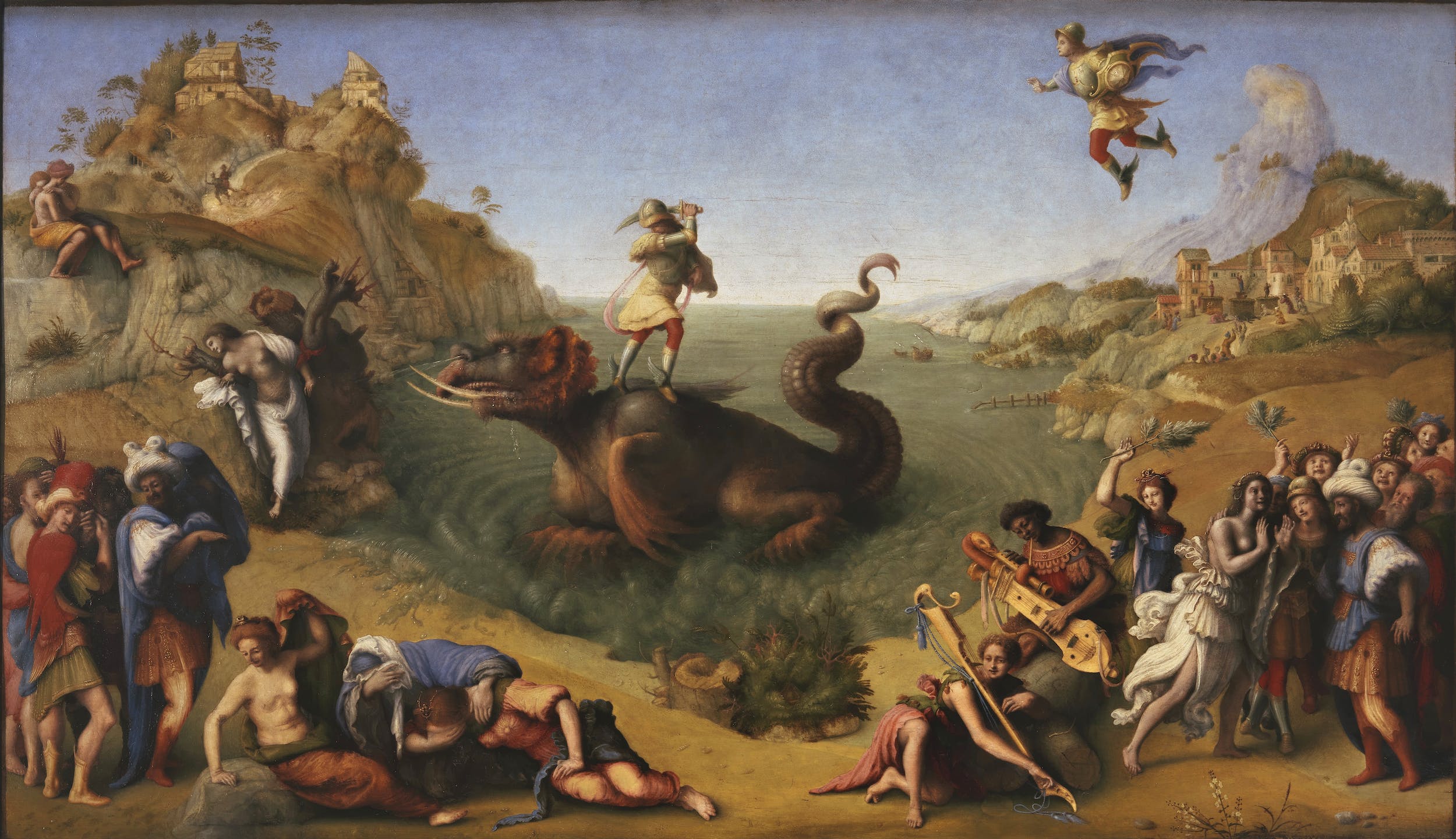 This gorgeous painting by Piero di Cosimo (Florence, 1462 - 1522) was executed between 1510 and 1515c. Although reduced in size (1230x700 mm), it displays a surprising and microscopic attention to details which is worth watching through the use of digital devices: an experience that undoubtedly strikes the observer for the flawless accuracy of particulars almost invisible to the naked eye.

The painting is also remarkable for the captivating "scenic virtuality" of the episode narrated: the source is the myth of Perseus and Andromeda told by Latin poet Ovid, a master of style for every writer, playwright or artist of the Italian and European Renaissance. In that work of art which is Metamorphoses, Ovid has handed down to us a masterpiece of writing that in its versification, metre, structure and rhythm almost "mimetically" expresses the literal meaning of "metamorphosis", of transformation, of time that perpetually turns every form into another one in ceaseless movement: here, in Piero di Cosimo's painting, the same "scenic virtuality" of the Ovidian narration that imitates reality is exemplified through a syncronous and circular representation of the same episode, where the different moments of the story originally unfolded in a temporal sequence of events are all simultaneously depicted in a single painting; a means that perfectly renders that sense of everlasting transmutation of being characterizing the poem by Ovid.

Symbols, clues and allusions to the Medici family and Piero di Cosimo's contemporary culture complete the picture according to that typical process of reinterpretation and modernization of classical sources Humanistic and Renaissance thinking pivots on.

Curated by the Department of Digital Communication