First Heaven, or that of the Moon. Piccarda Donati and Empress Constance

Such as through polished and transparent glass,
Or waters crystalline and undisturbed,
But not so deep as that their bed be lost,

Come back again the outlines of our faces
So feeble, that a pearl on forehead white
Comes not less speedily unto our eyes;

Such saw I many faces prompt to speak,
So that I ran in error opposite
To that which kindled love 'twixt man and fountain.

Second Heaven, or that of Mercury: Justinian

As, in a fish-pond which is pure and tranquil,
The fishes draw to that which from without
Comes in such fashion that their food they deem it;

So I beheld more than a thousand splendours
Drawing towards us, and in each was heard:
"Lo, this is she who shall increase our love."

Third Heaven, or that of Venus: Charles Martel, Cunizza da Romano and Folchetto of Marseille

Within that light beheld I other lamps
Move in a circle, speeding more and less,
Methinks in measure of their inward vision.

Fourth Heaven, or that of the Sun: St. Thomas Aquinas and St. Buonaventura of Bagnoregio

Lights many saw I, vivid and triumphant,
Make us a centre and themselves a circle,
More sweet in voice than luminous in aspect.

Thus girt about the daughter of Latona
We sometimes see, when pregnant is the air,
So that it holds the thread which makes her zone.

Within the court of Heaven, whence I return,
Are many jewels found, so fair and precious
They cannot be transported from the realm;

And of them was the singing of those lights.
Who takes not wings that he may fly up thither,
The tidings thence may from the dumb await!

Fifth Heaven, or that of Mars: the blessed form a Celestial Cross

Even as distinct with less and greater lights
Glimmers between the two poles of the world
The Galaxy that maketh wise men doubt,

Thus constellated in the depths ot Mars,
Those rays described the venerable sign
That quadrants joining in a circle make.

Here doth my memory overcome my genius;
For on that cross as levin gleamed forth Christ,
So that I cannot find ensample worthy;

But he who takes his cross and follows Christ
Again will pardon me what I omit,
Seeing in that aurora lighten Christ.

From horn to horn, and 'twixt the top and base,
Lights were in motion, brightly scintillating
As they together met and passed each other;

Sixth Heaven, or that of Jupiter: the blessed form some letters and then an eagle

Within that Jovial torch did I behold
The sparkling of the love which was therein
Delineate our language to mine eyes.

And even as birds uprisen from the shore,
As in congratulation o'er their food,
Make squadrons of themselves, now round, now long,

So from within those lights the holy creatures
Sang flying to and fro, and in their figures
Made of themselves now D, now I, now L.

First singing they to their own music moved;
Then one becoming of these characters,
A little while they rested and were silent.

O divine Pegasea, thou who genius
Dost glorious make, and render it long-lived,
And this through thee the cities and the kingdoms,

Illume me with thyself, that I may bring
Their figures out as I have them conceived!
Apparent be thy power in these brief verses!

Themselves then they displayed in five times seven
Vowels and consonants; and I observed
The parts as they seemed spoken unto me.

Diligite justitiam, these were
First verb and noun of all that was depicted;
Qui judicatis terram were the last.

Seventh Heaven, or that of Saturn: the Celestial Stairway

Thou blessed life that dost remain concealed
In thy beatitude, make known to me
The cause which draweth thee so near my side;

And tell me why is silent in this wheel
The dulcet symphony of Paradise,
That through the rest below sounds so devoutly."

"Thou hast thy hearing mortal as thy sight,"
It answer made to me; "they sing not here,
For the same cause that Beatrice has not smiled.

Thus far adown the holy stairway's steps
Have I descended but to give thee welcome
With words, and with the light that mantles me;

Nor did more love cause me to be more ready,
For love as much and more up there is burning,
As doth the flaming manifest to thee.

But the high charity, that makes us servants
Prompt to the counsel which controls the world,
Allotteth here, even as thou dost observe."

"I see full well," said I, "O sacred lamp!
How love unfettered in this court sufficeth
To follow the eternal Providence;

But this is what seems hard for me to see,
Wherefore predestinate wast thou alone
Unto this office from among thy consorts."

Eighth circle, or that of the Fixed Stars: Dante contemplates his journey

Thou hadst not thrust thy finger in the fire
And drawn it out again, before I saw
The sign that follows Taurus, and was in it.

O glorious stars, O light impregnated
With mighty virtue, from which I acknowledge
All of my genius, whatsoe'er it be.

With you was born, and hid himself with you,
He who is father of all mortal life,
When first I tasted of the Tuscan air;

And then when grace was freely given to me
To enter the high wheel which turns you round,
Your region was allotted unto me.

Eighth circle, or that of the Fixed Stars: St. Peter examines Dante upon Faith

"Why doth my face so much enamour thee,
That to the garden fair thou turnest not.
Which under the rays of Christ is blossoming?

There is the Rose in which the Word Divine
Became incarnate; there the lilies are
By whose perfume the good way was discovered."

Thus Beatrice; and I, who to her counsels
Was wholly ready, once again betook me
Unto the battle of the feeble brows.

Eighth circle, or that of the Fixed Stars: St. James examines Dante upon Hope and Charity. Adam hovering high in the air

Thereafterward towards us moved a light
Out of that band whence issued the first-fruits
Which of his vicars Christ behind him left.

And then my Lady, full of ecstasy,
Said unto me: "Look, look! behold the Baron
For whom below Galicia is frequented."

With voice and gesture of a perfect leader
She recommenced: "We from the greatest body
Have issued to the heaven that is pure light;

Here shalt thou see the one host and the other
Of Paradise, and one in the same aspects
Which at the final judgment thou shalt see." 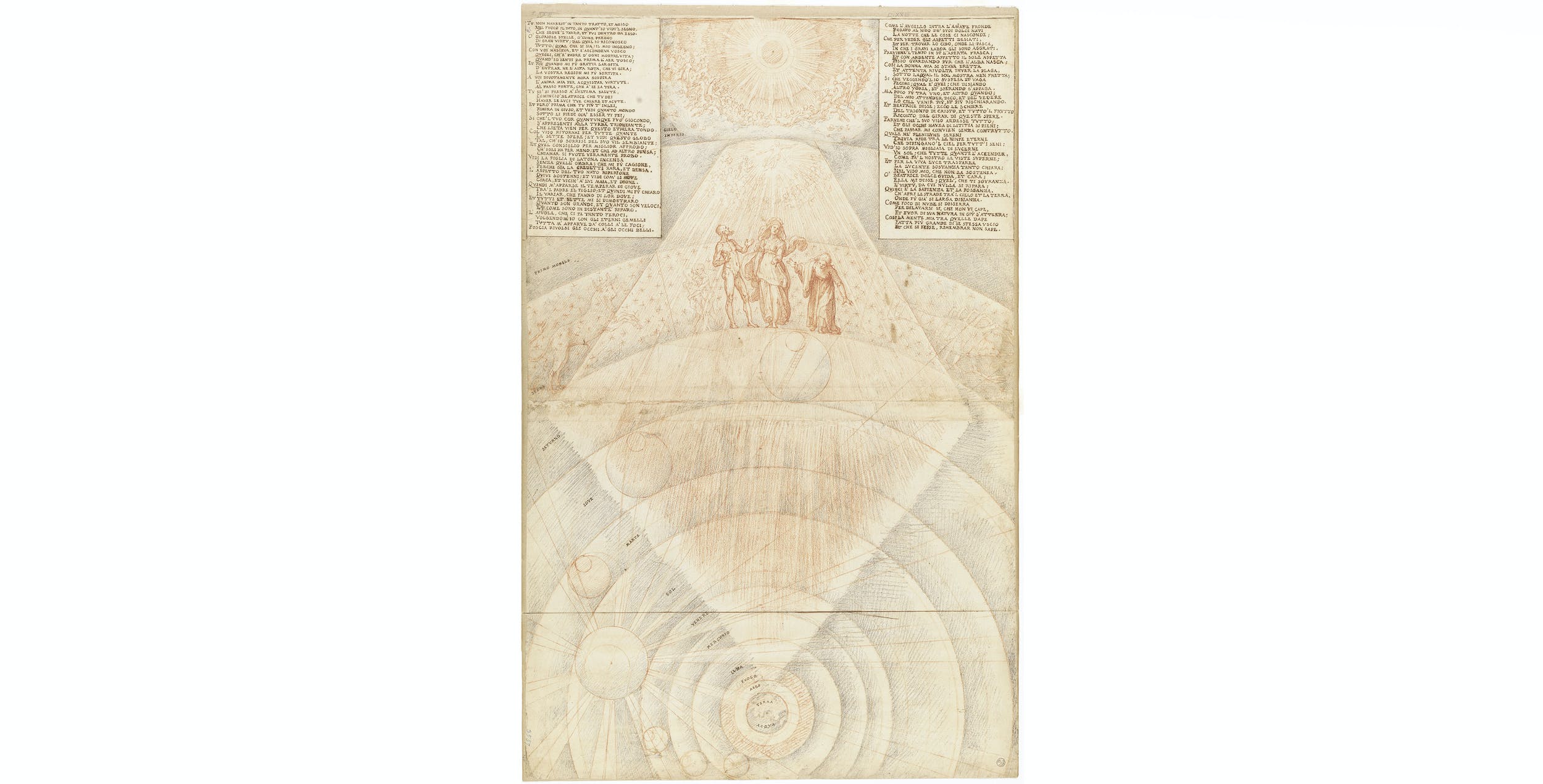 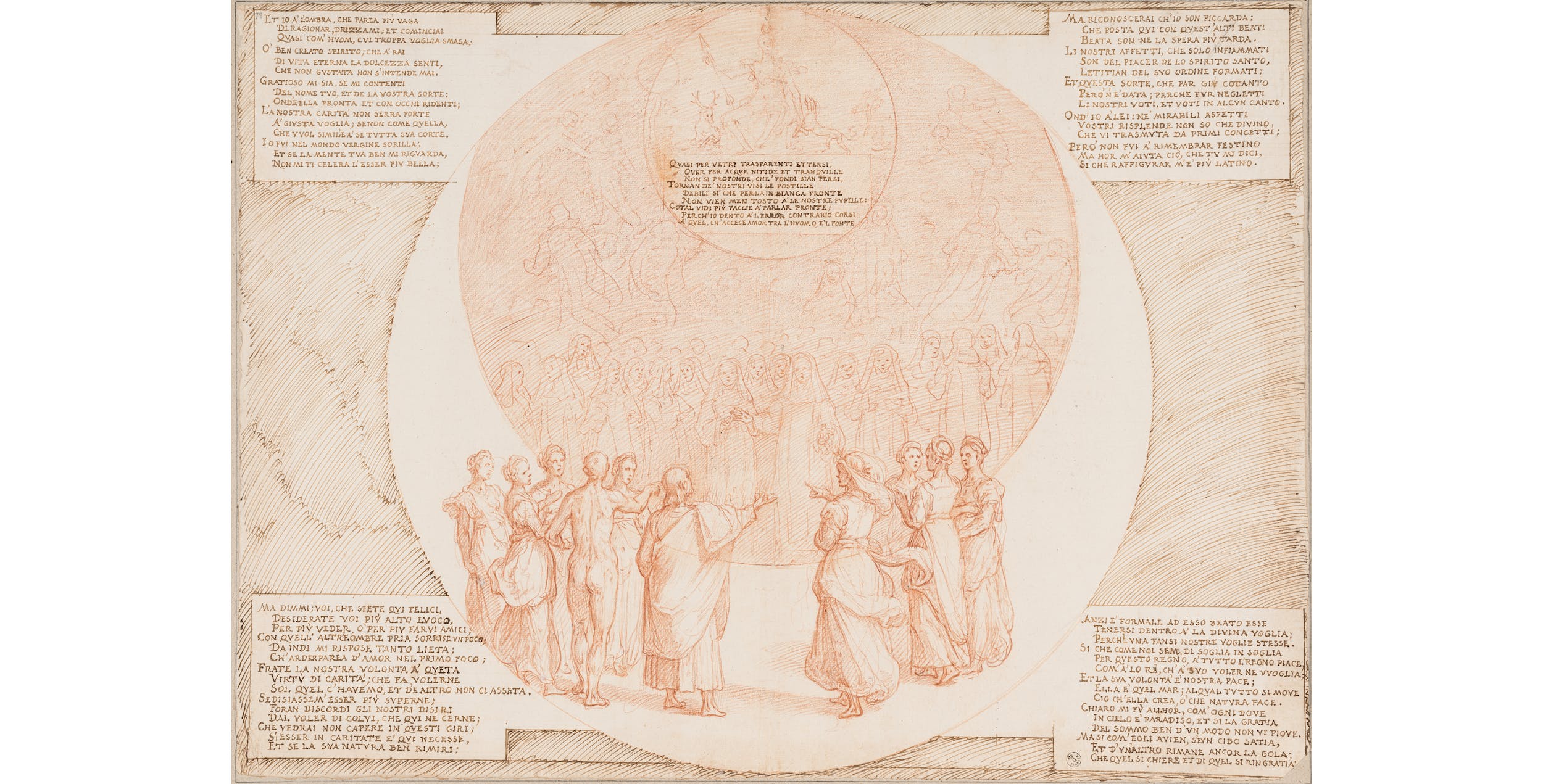 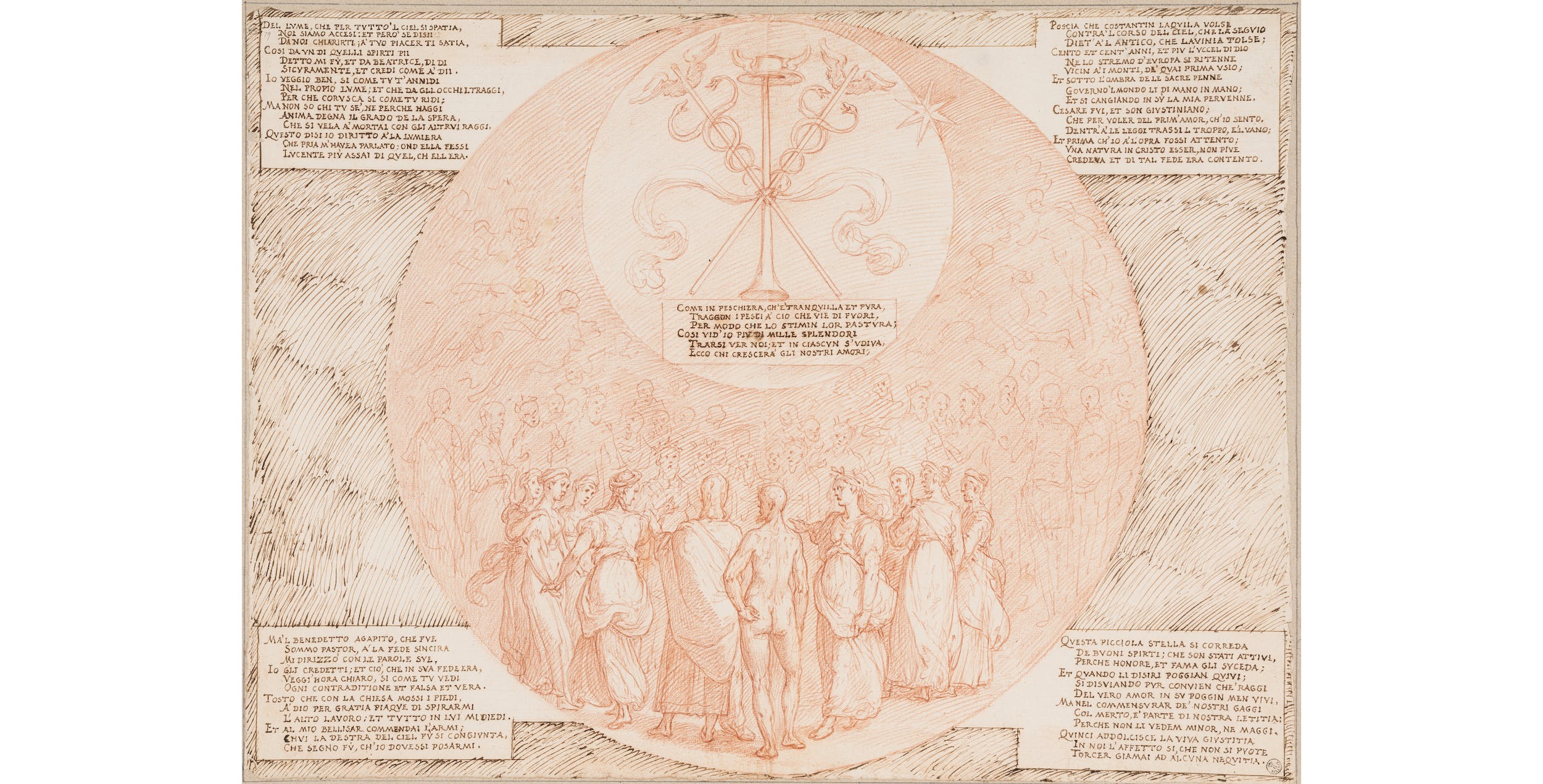 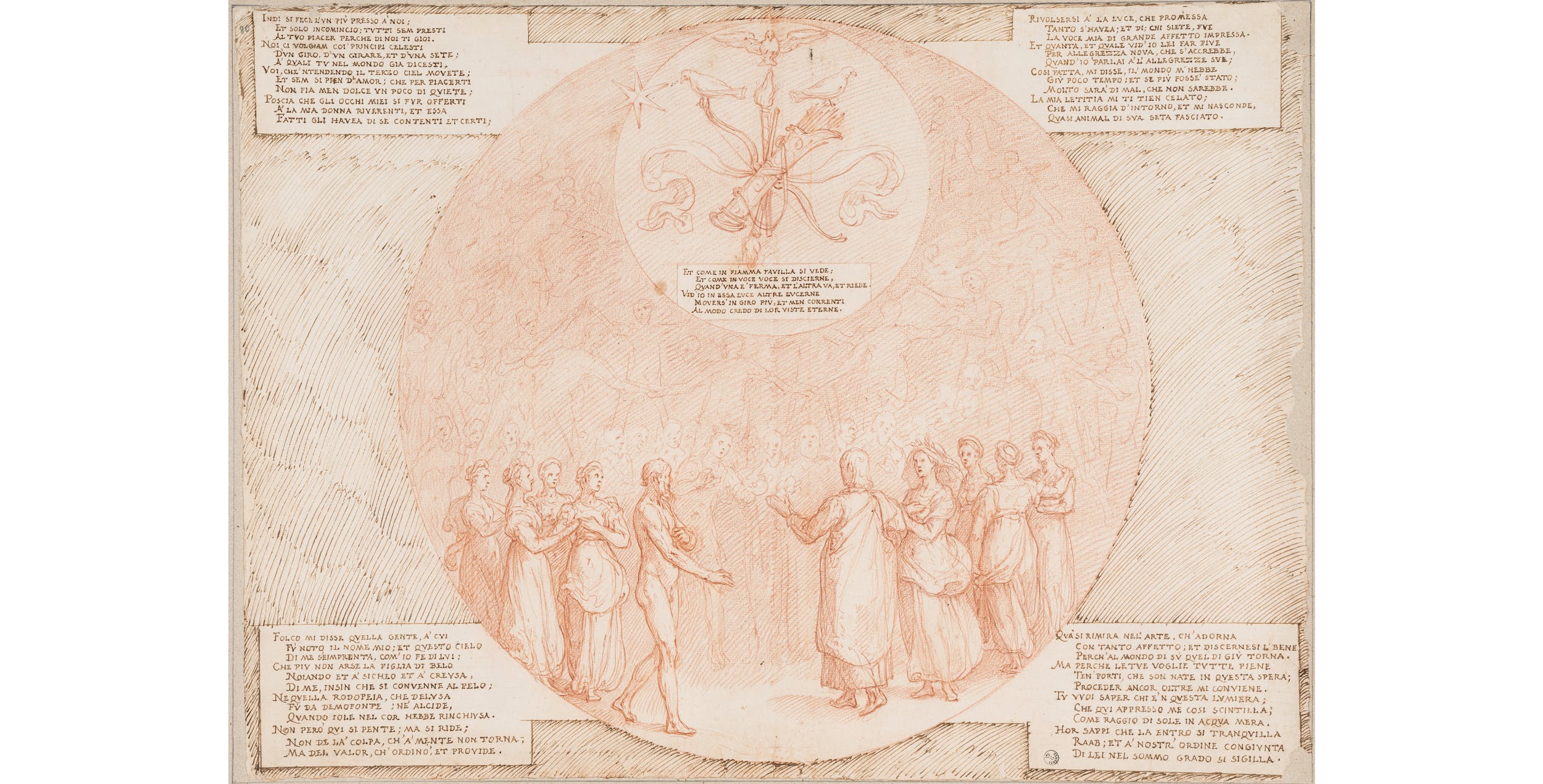 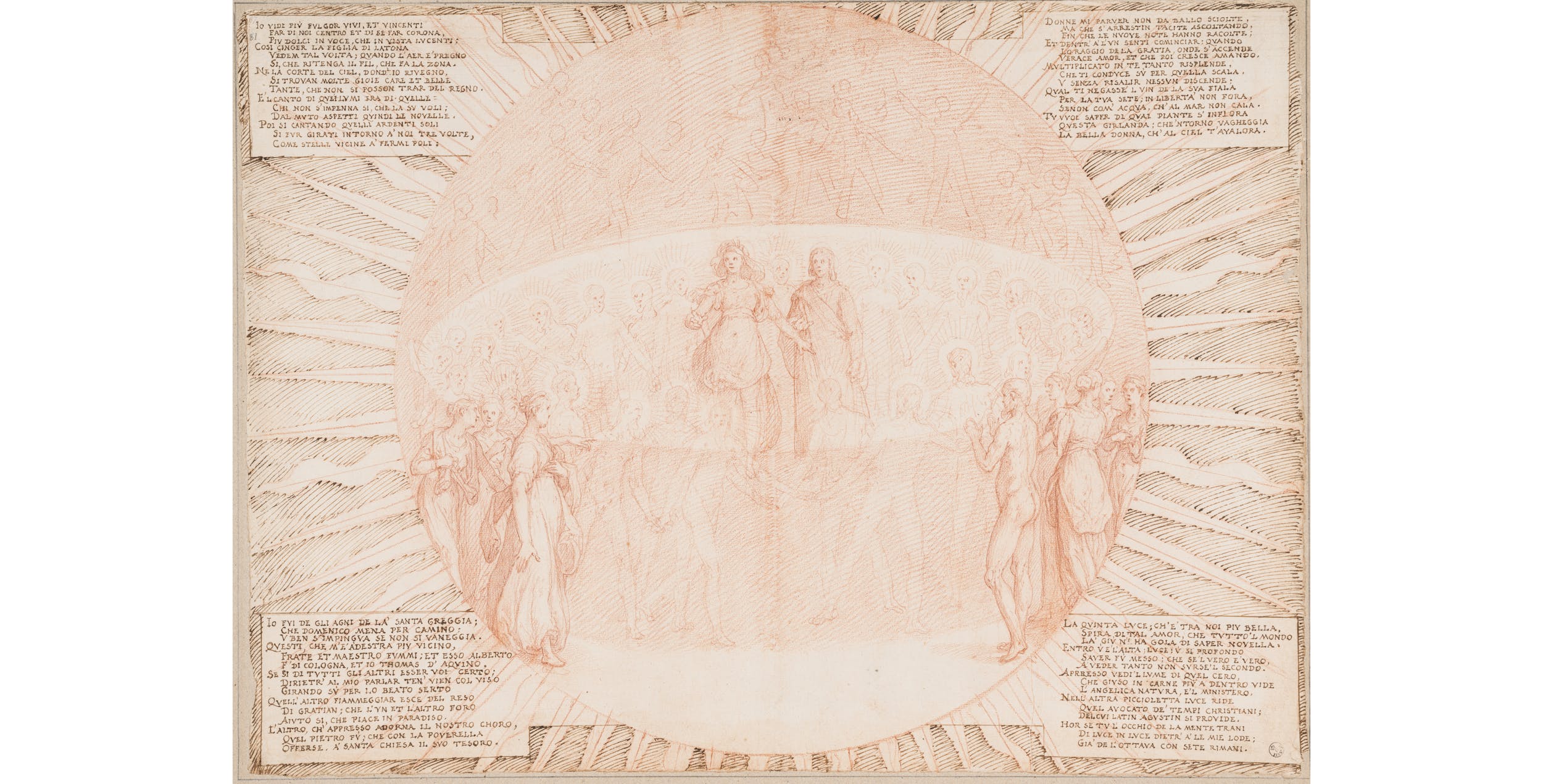 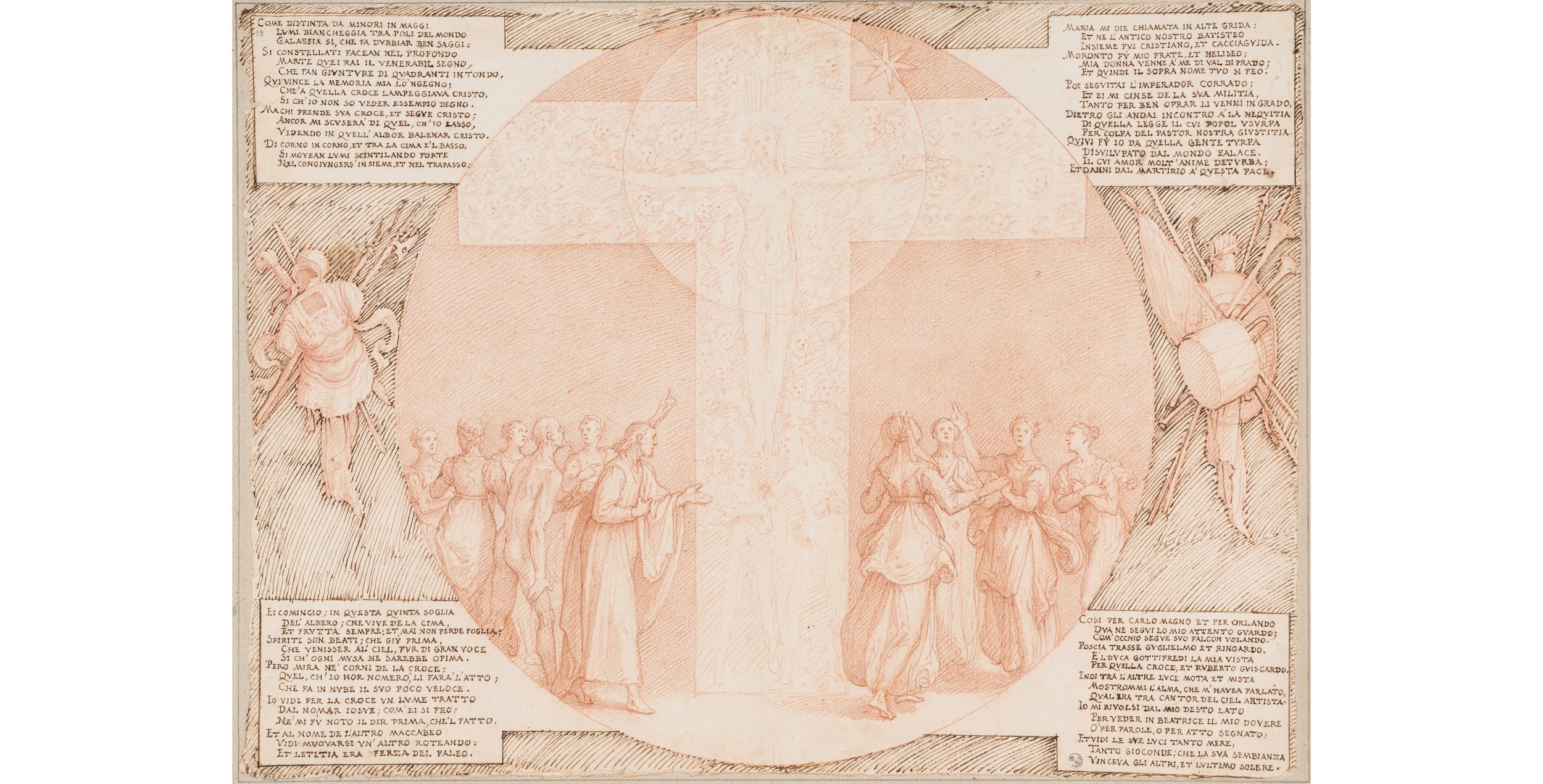 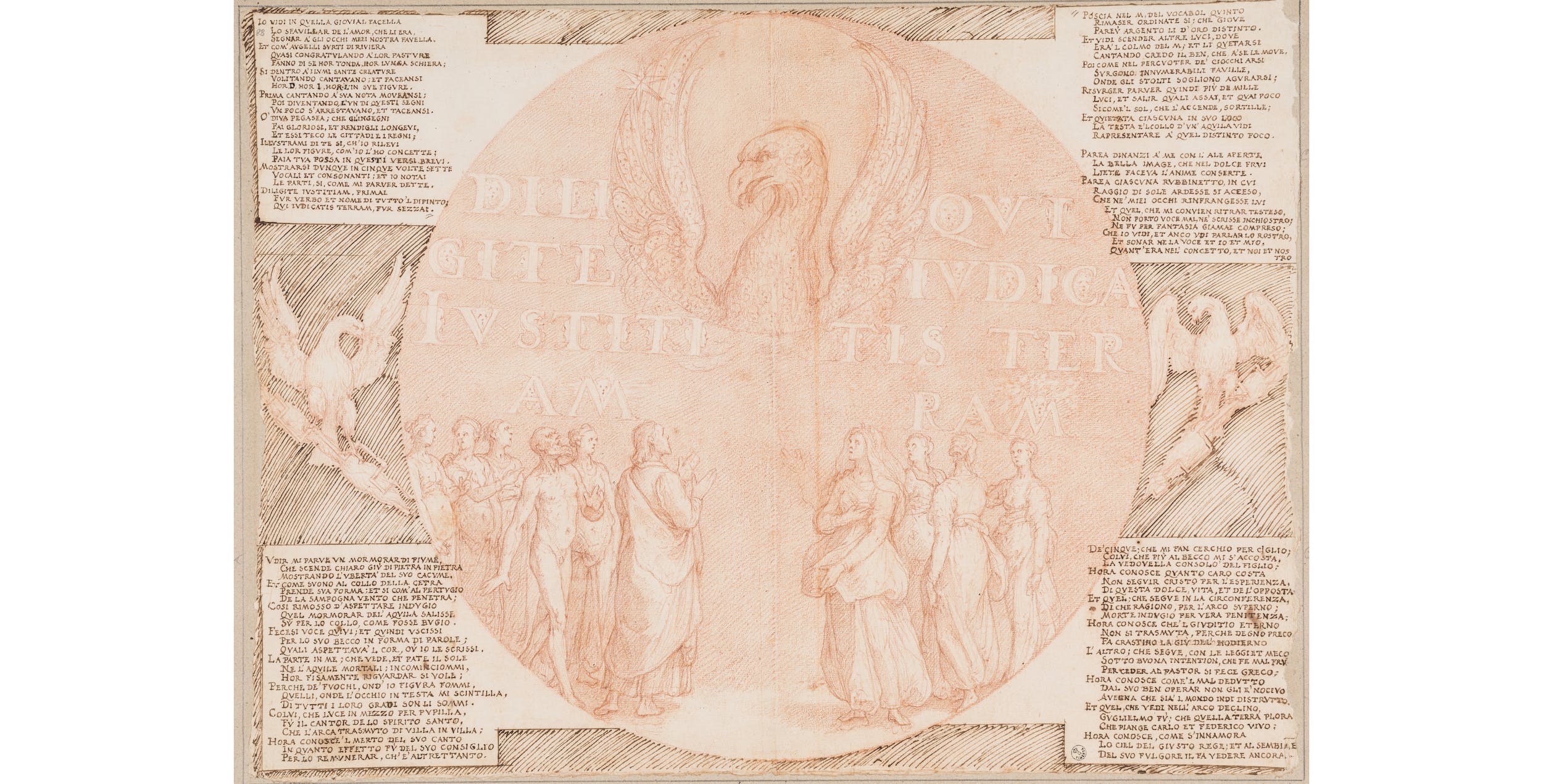 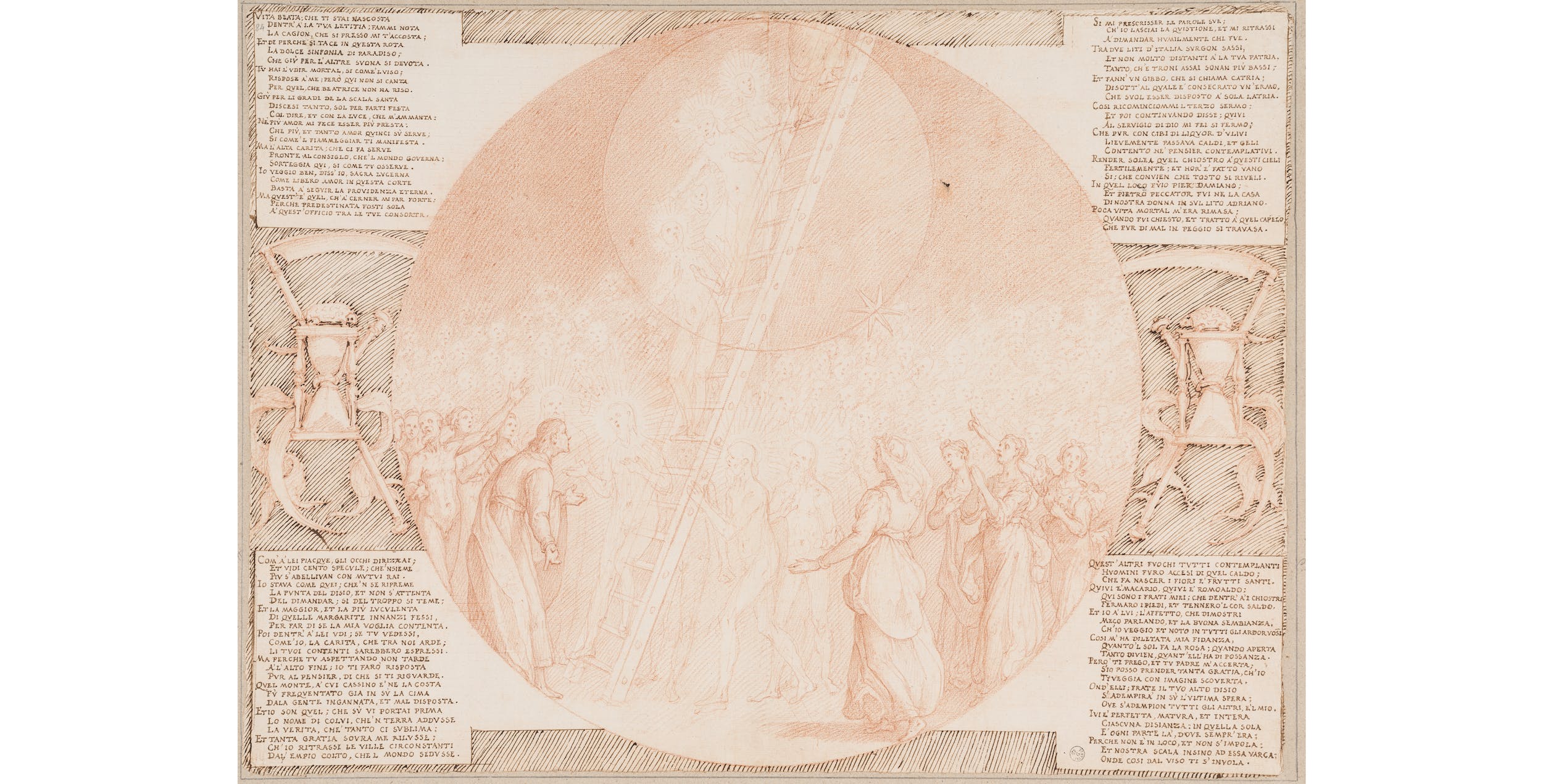 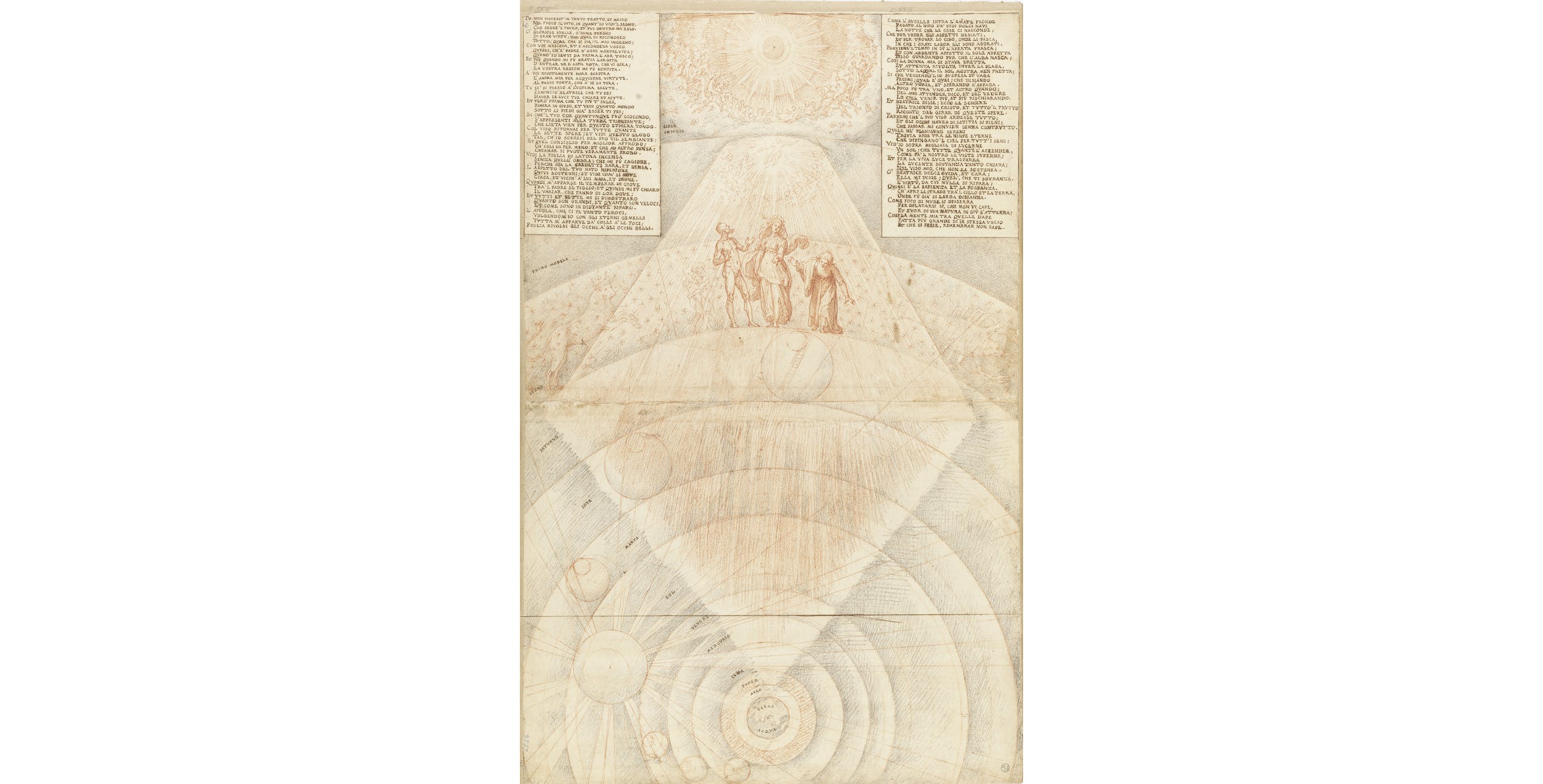 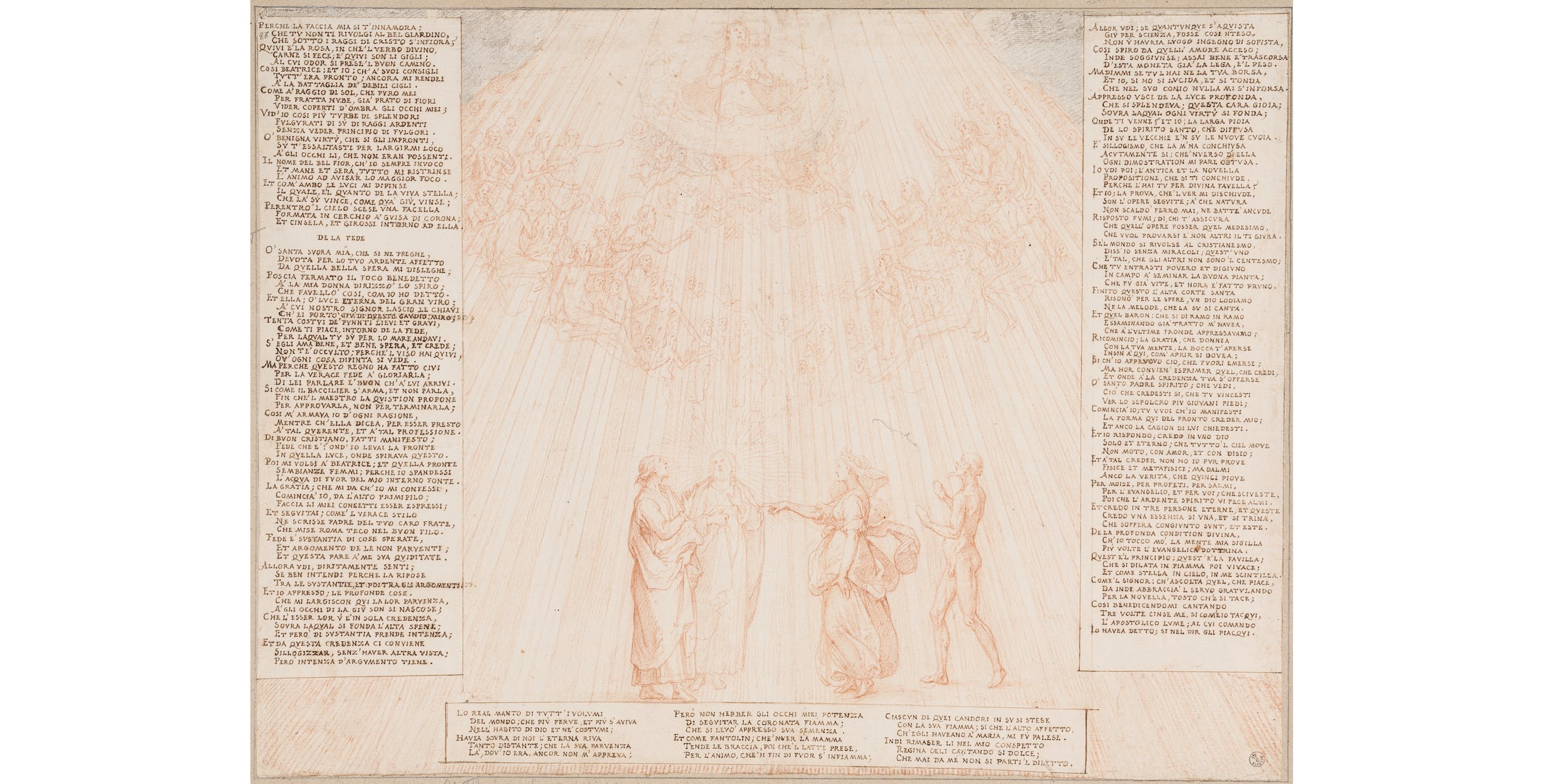 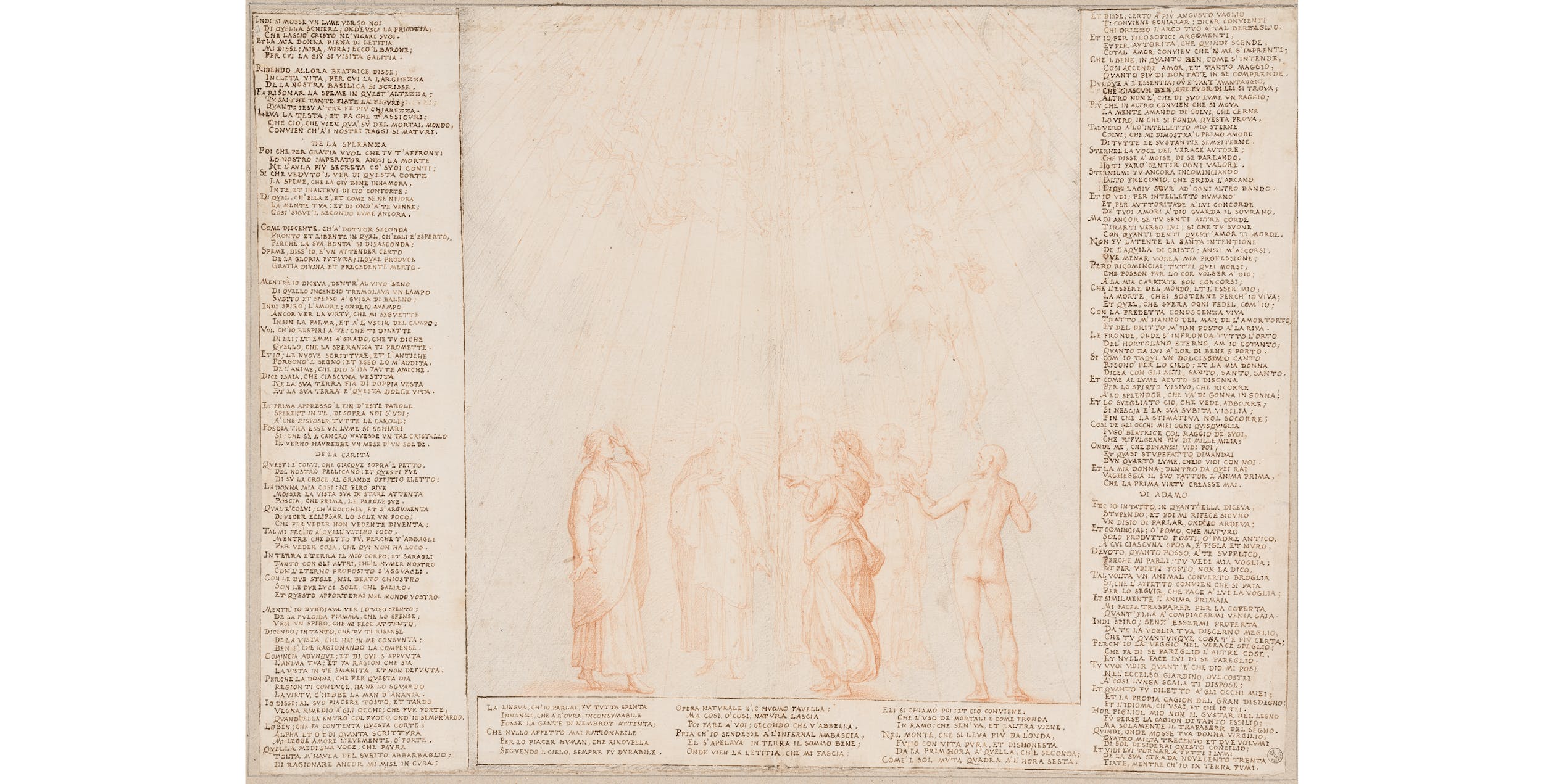 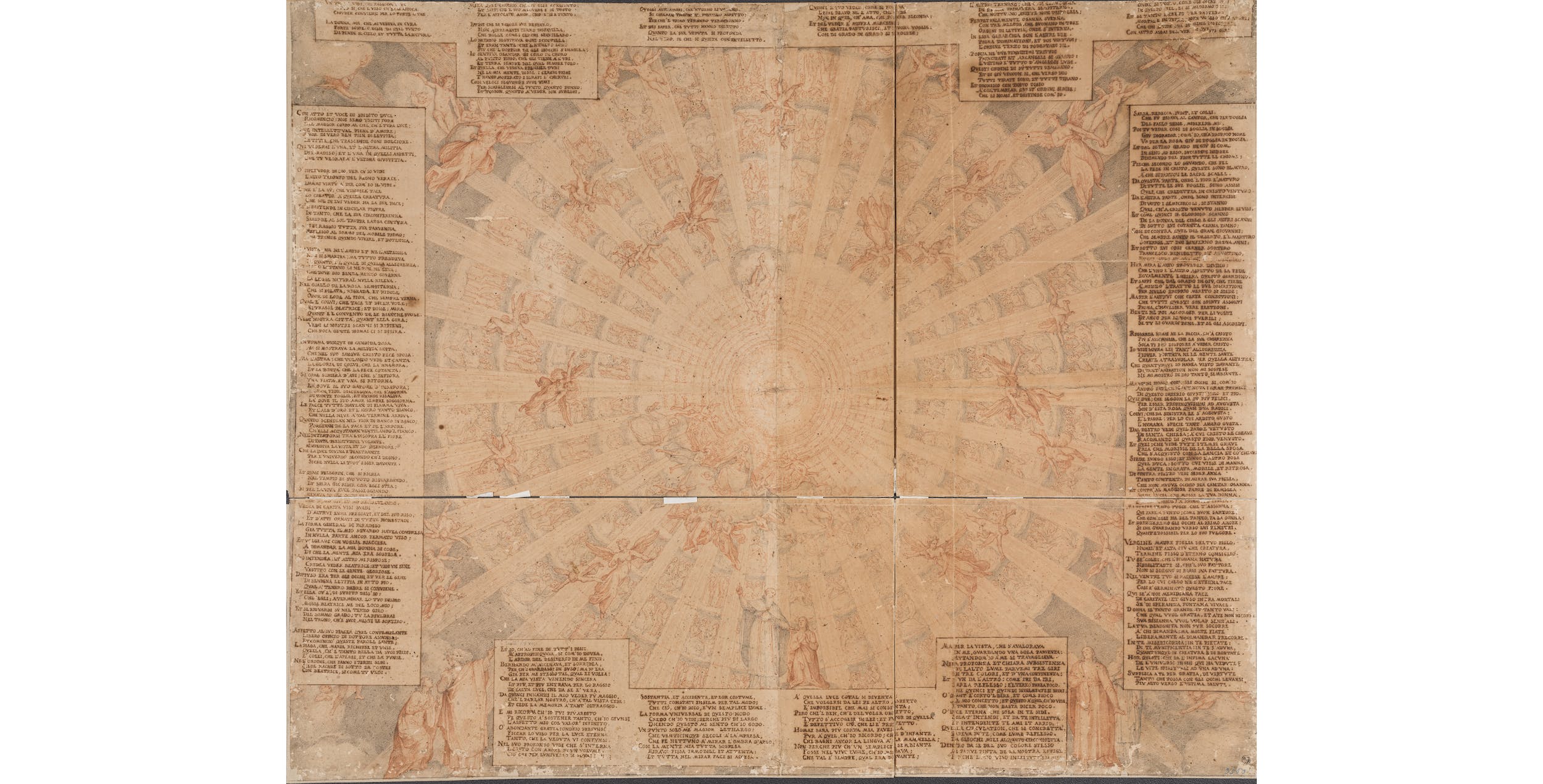