In 1768, when Joseph Wright of Derby executed the painting An Experiment on a Bird in the Air Pump, experiments on air vacuum through the use of the machine assembled by Irish chemist Robert Boyle, were no longer a scientific novelty. However, they were widely recreated with an educational purpose in many different places and occasions. Also in Florence, from the 1770s on Grand Duke Peter Leopold of Habsburg-Lorraine commissioned such experiments first for his children at Pitti Palace, and then for a wider audience in the newborn Museum of Physics and Natural History at La Specola.

Joseph Wright of Derby's Experiment, on loan from the National Gallery of London, depicts a meeting in an English country house: the audience is poised, they are not experts, and this is why their reactions are so different. The painter, in fact, succeeded in catching an extremely motley set of different human types, each of them featured with an apparent touch of theatricality in their expressions. The strong contrasts of light and shadow and the illusionist-like clothing of the man in the center, indeed strengthen that effect. It is he who can sentence the bird to death by turning the key and pulling out the air from the bell. Also the choice of the white tiny parrot makes the contrast between its feathers' whiteness and the surrounding darkness even more dramatic. Among the amazed spectators is also the observer of the painting himself. Its characters' dimensions along with the instruments and the spaces themselves are close to 1:1 scale hence creating the perception of a room in the room, with a realistic effect enhanced by a clear, accurate, highly detailed pictorial quality.

In the exhibition, curated by Alessandra Griffo, other works are placed in dialogue with the large canvas, illustrating the practice of candlelight study as well as the strong concentration on work during the night as is in Bartolomeo Cavarozzi's St. Jerome with two angels (1617), and the drawing by Enea Vico, The Academy of Baccio Bandinelli (1560). Also on display a nineteenth-century mantel clock in the shape of a cage, a precious object on loan from the Imperial and Royal Apartments of Pitti Palace, which recalls the aviary of the dove in the painting by Joseph Wright of Derby. 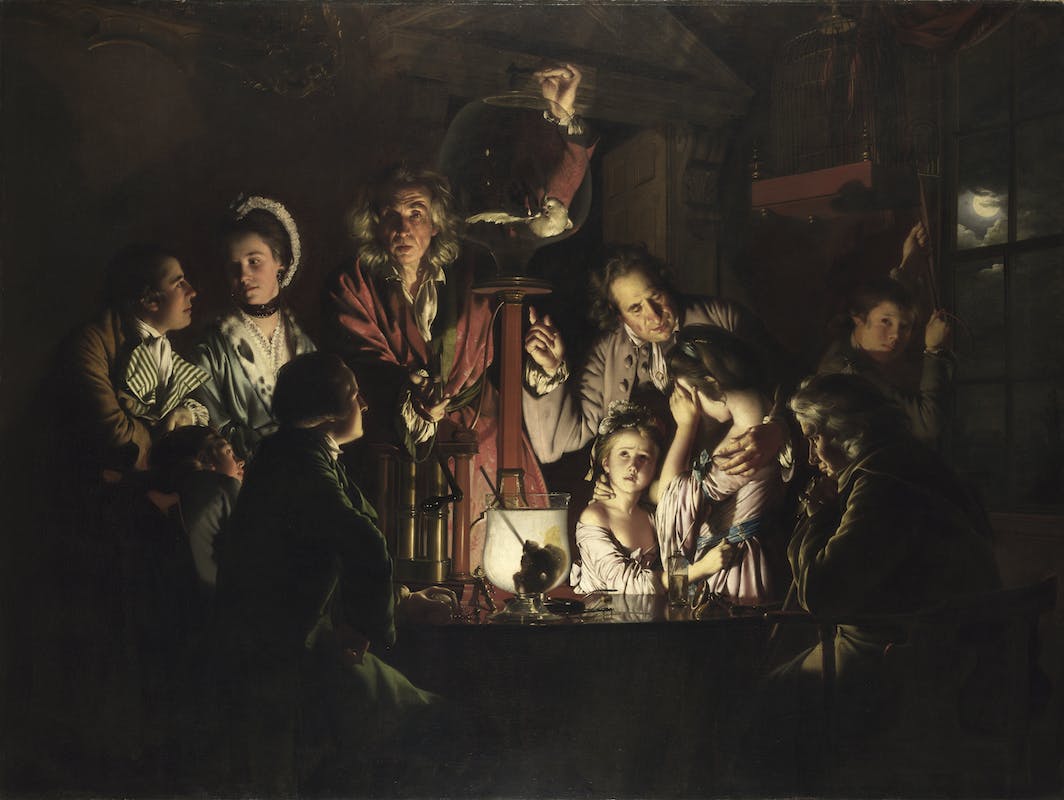 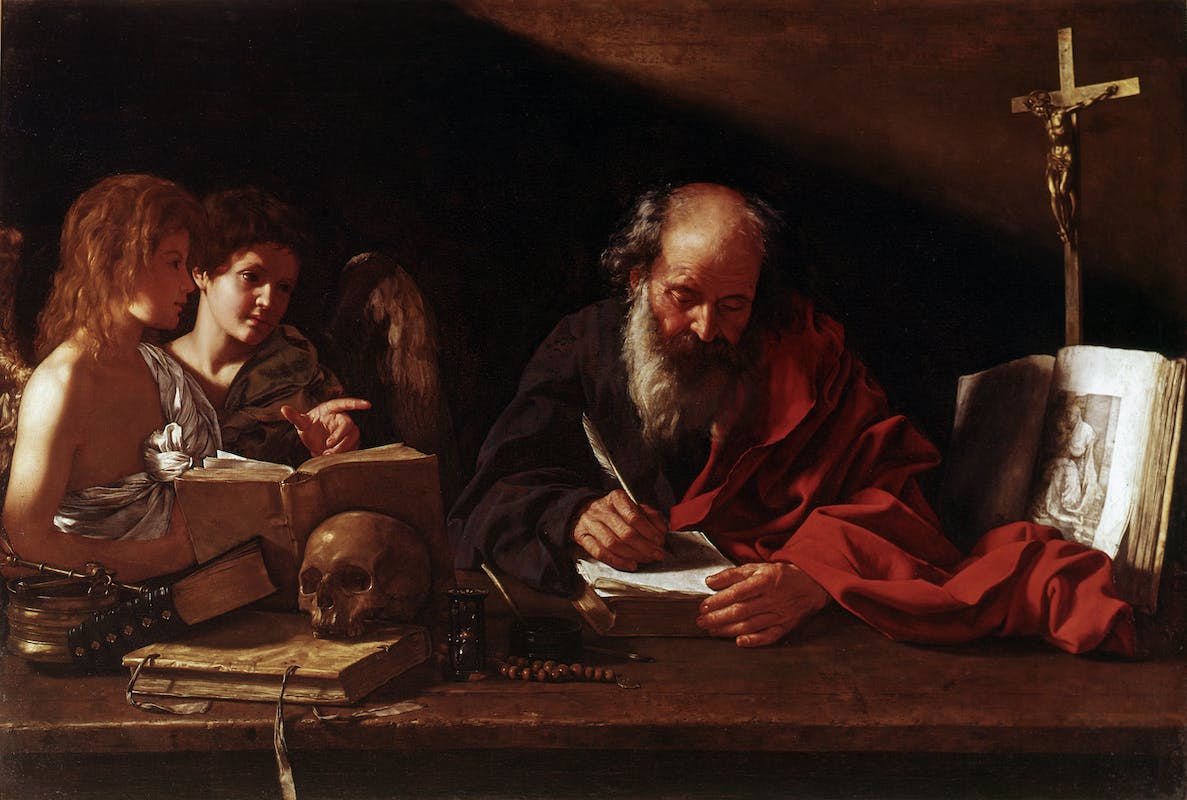 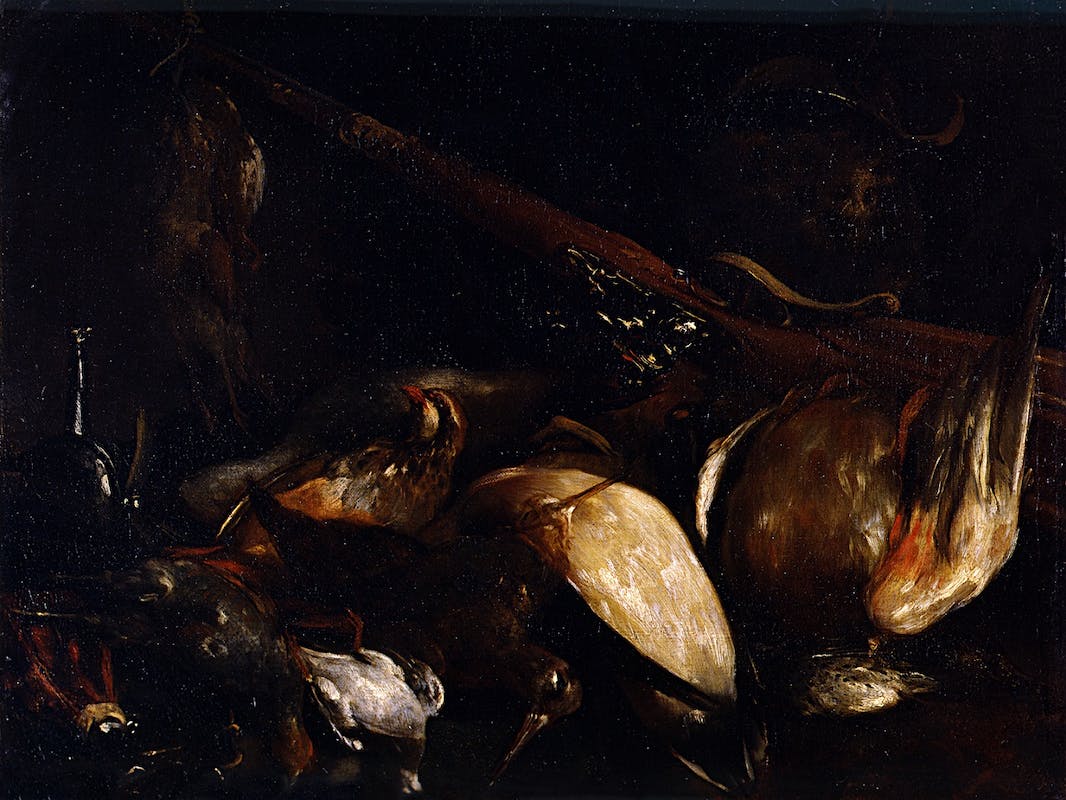 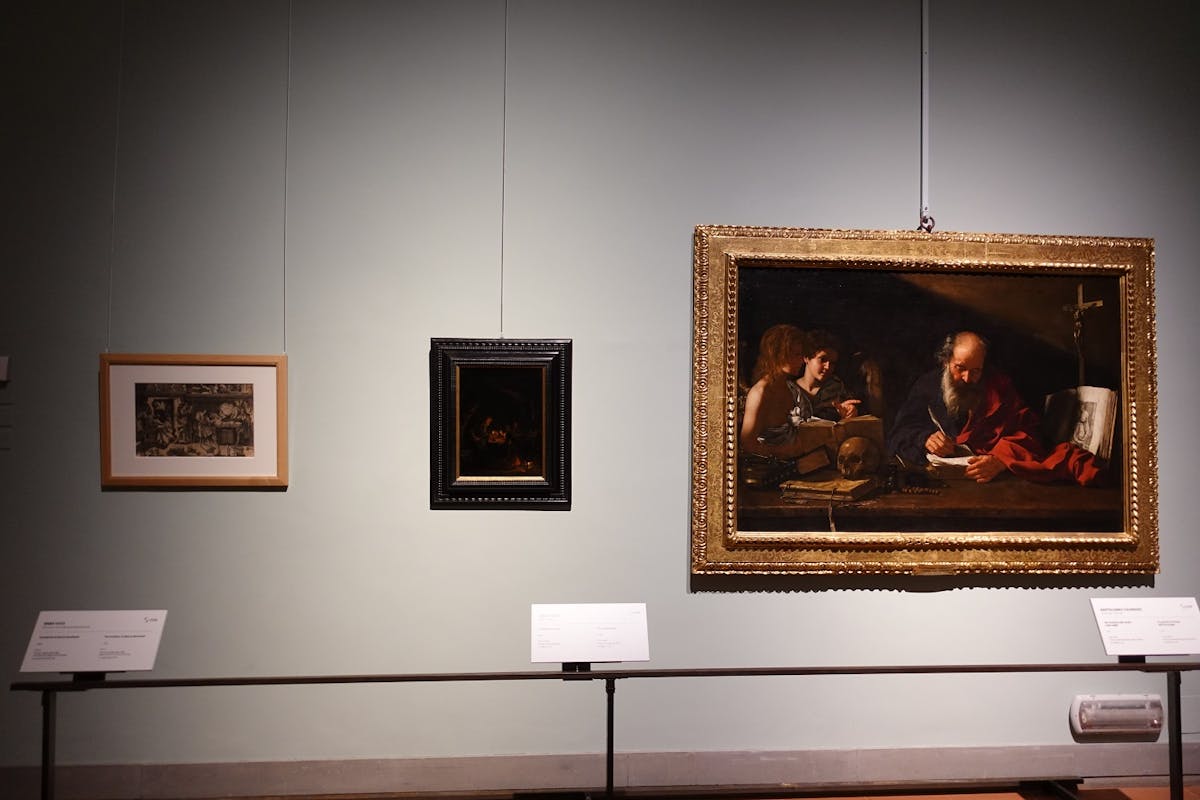 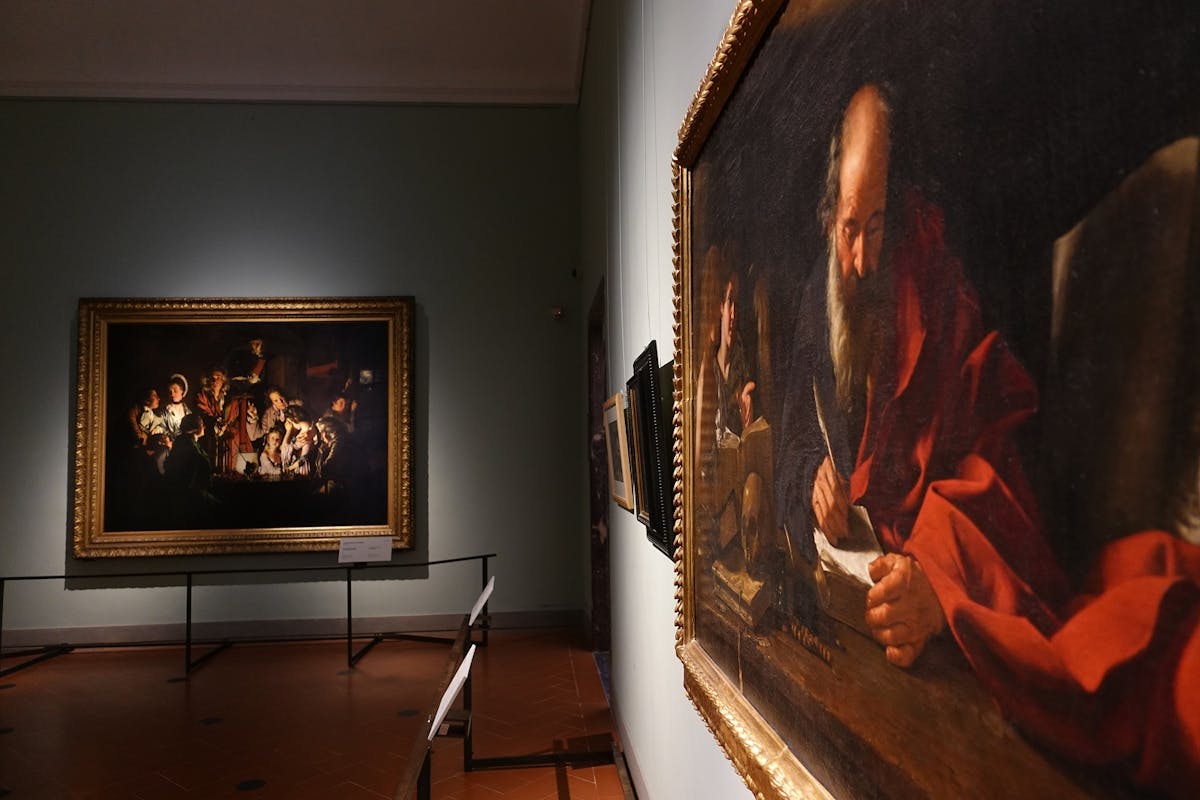 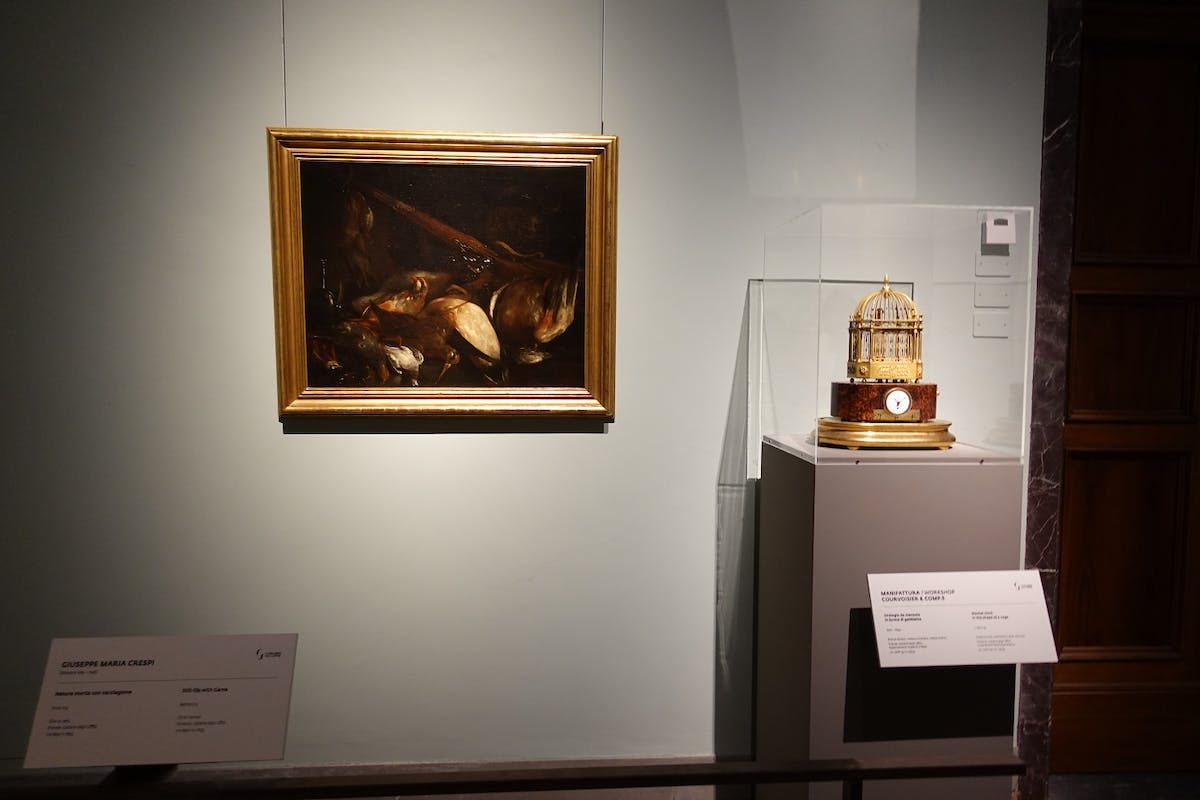 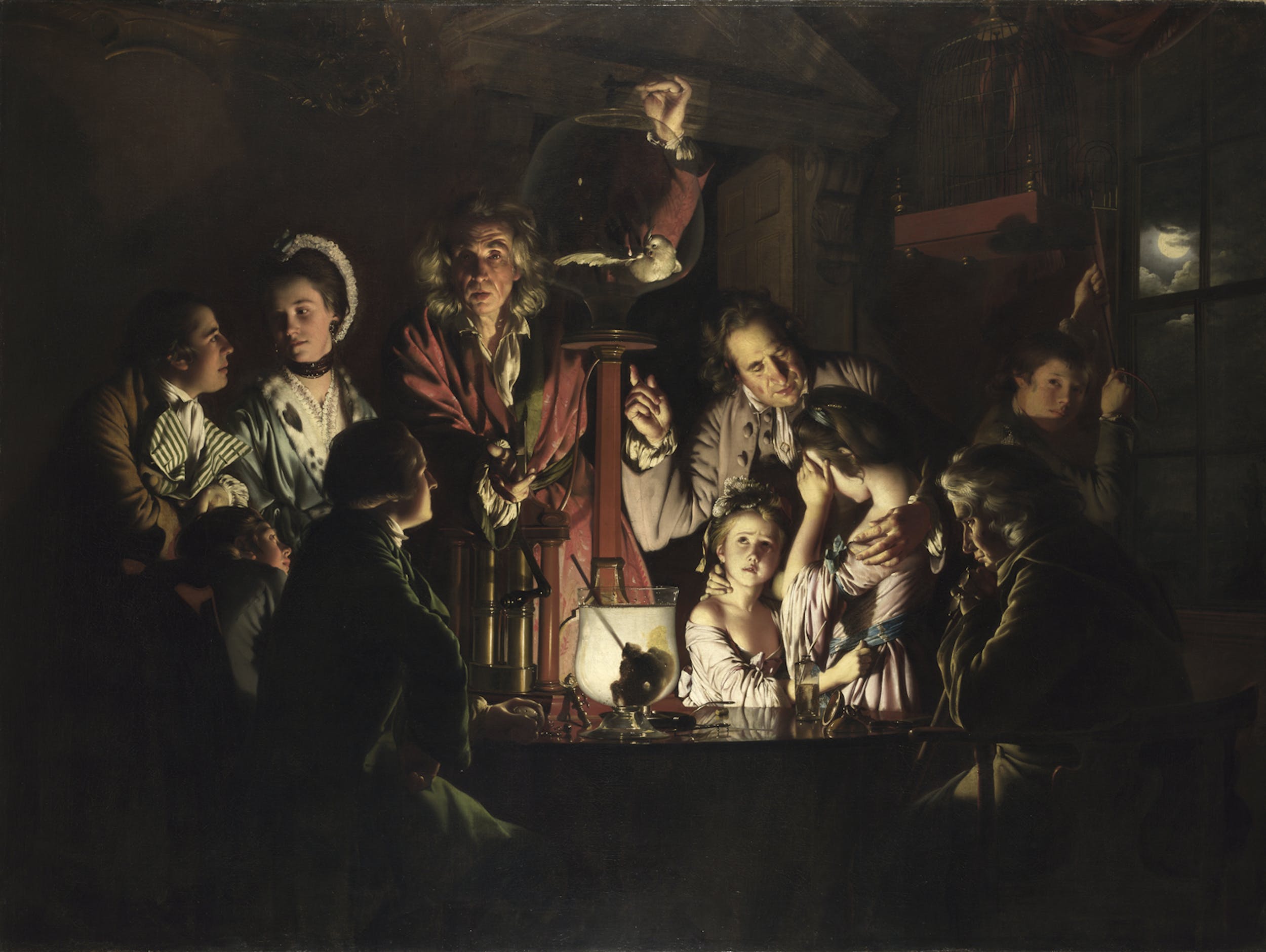 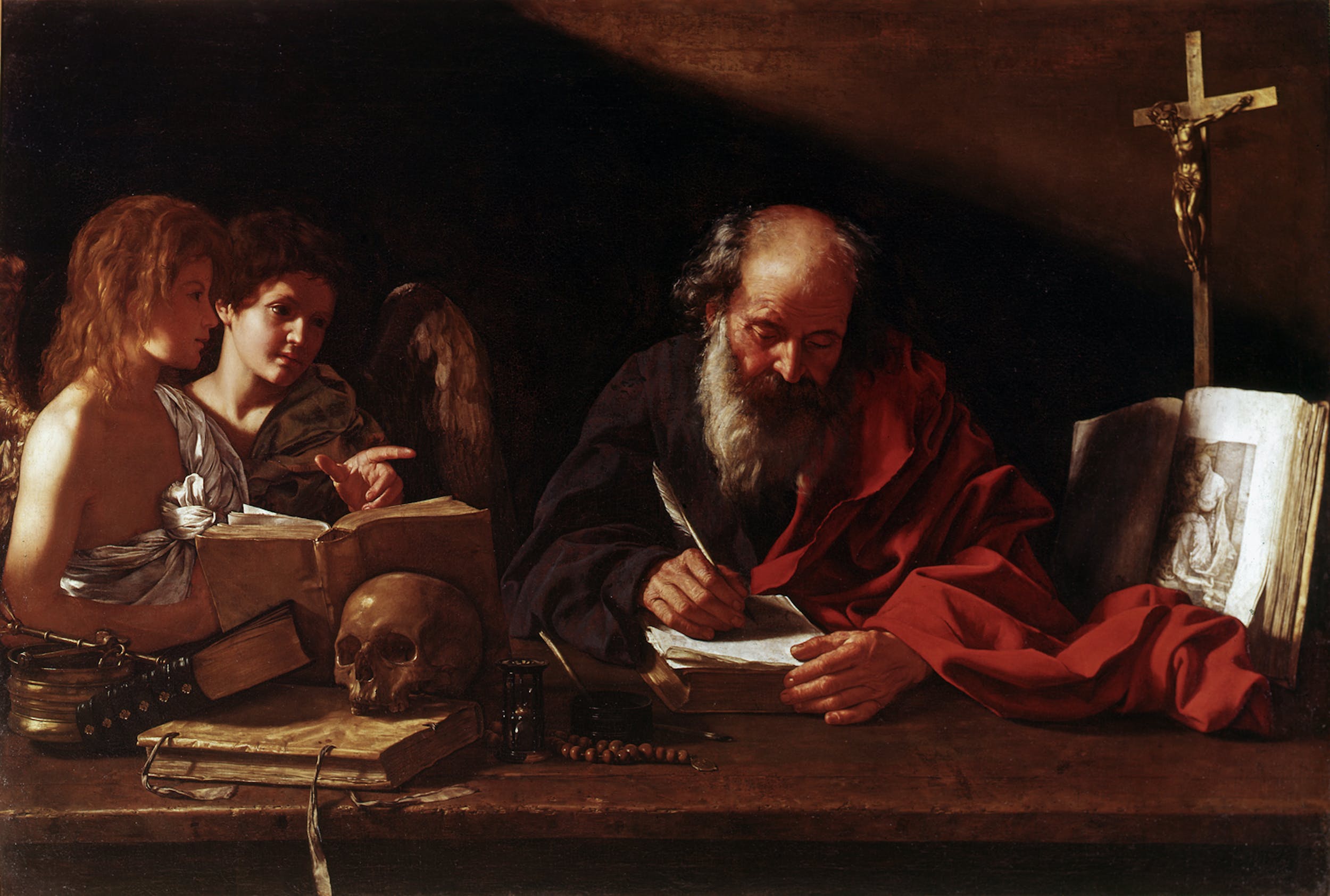 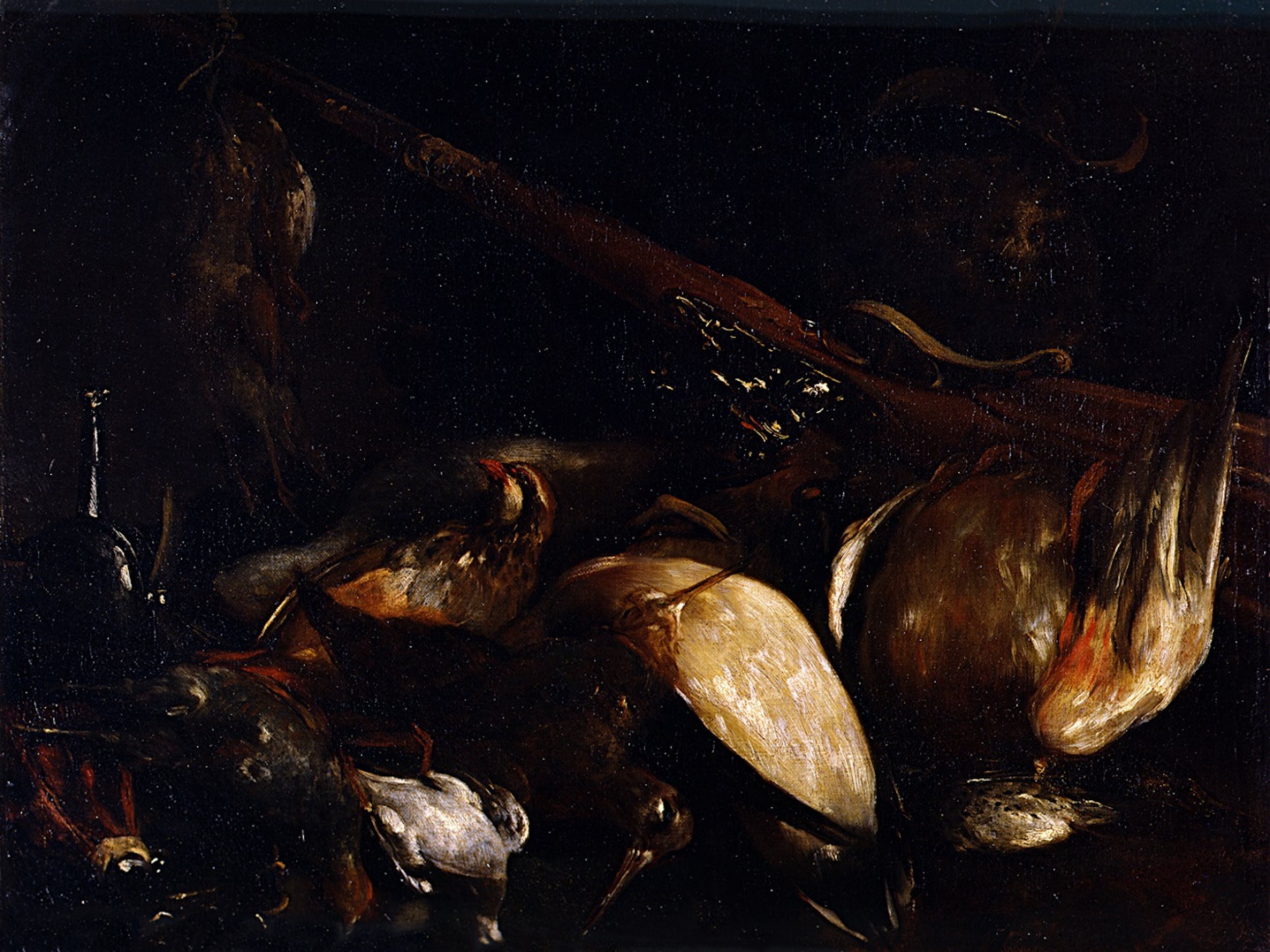 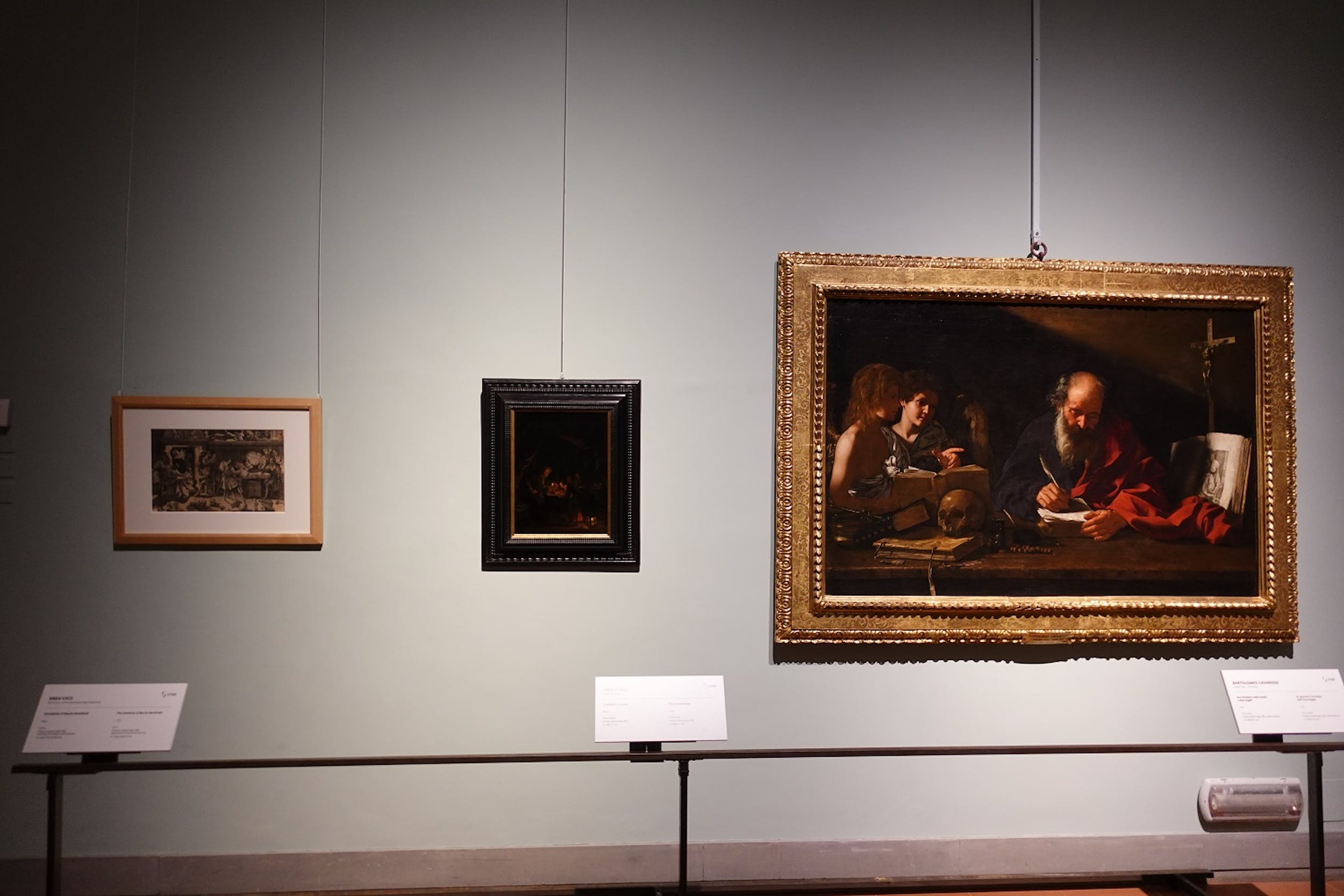 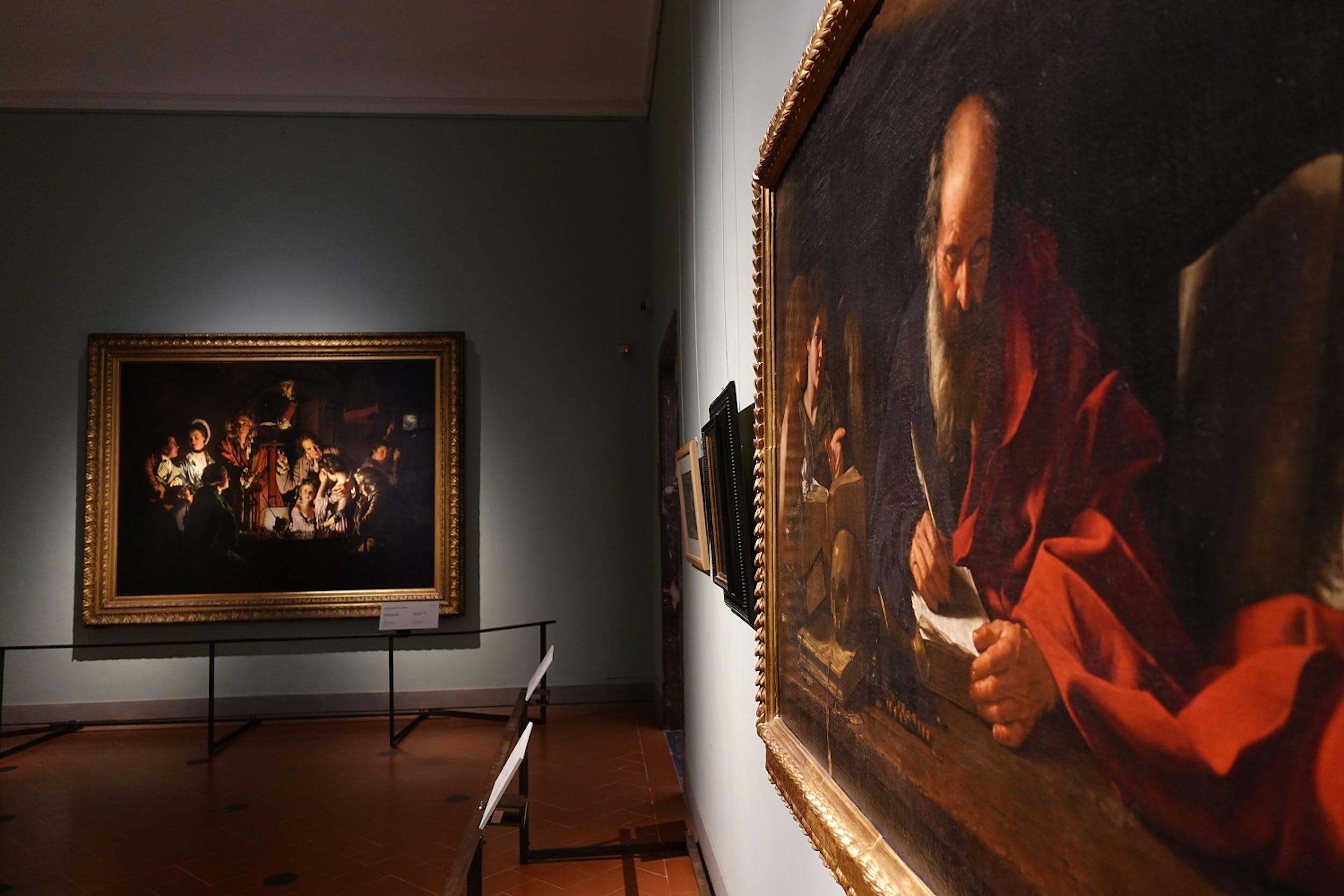 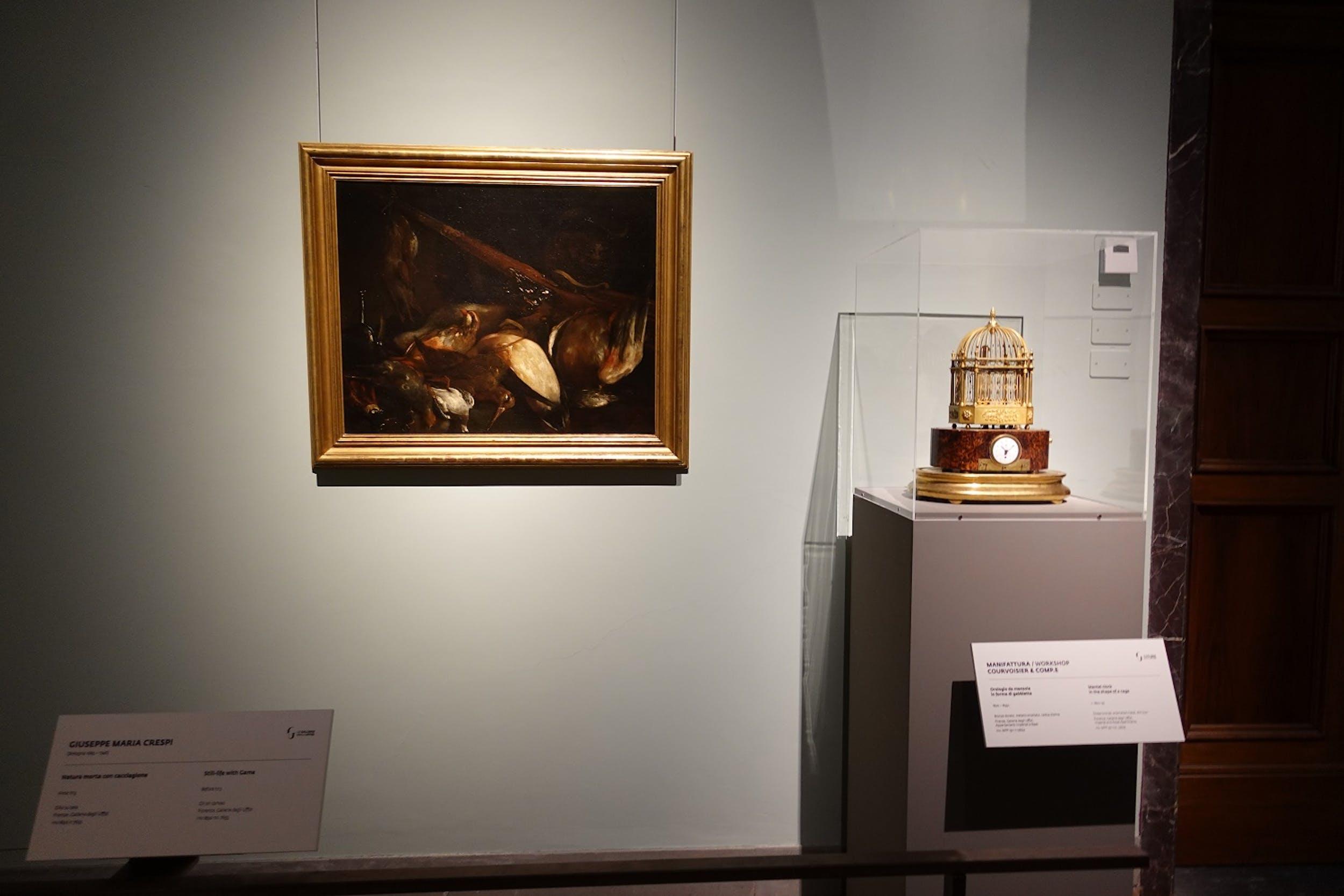