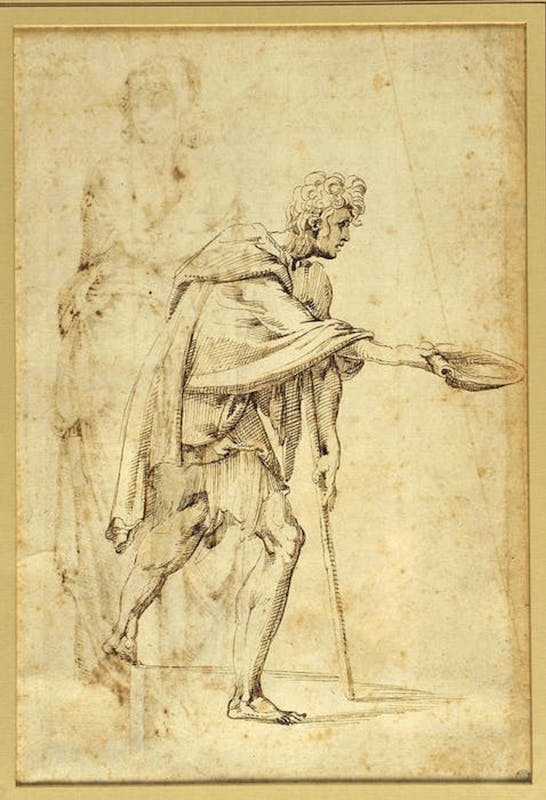 Giovan Francesco Rustici was a Florentine sculptor who trained with the artists of the Medici court in the 1480s, and in particular with Bertoldo di Giovanni. He was a friend of Leonardo da Vinci and from this bond probably derives Giovan Francesco’s passion for drawing, an aspect much praised by Giorgio Vasari in his biography of the artist, present in his Giuntina edition of 1568.

This drawing was recognised a few years ago (2012) as a certain trial sketch by the artist and one where it is possible to identify various technical, style and formal links with the only two studies (inventory numbers 224 F and 226 F) considered with any certainty to be by the sculptor. These feature figures based on classical models, stored in the Department of Prints and Drawings of the Uffizi Galleries in Florence, one of which (224 F) has an old inscription that attributes it to Rustici. Both drawings were probably part of the collection of Cardinal Leopoldo de' Medici (1675), who kept them under the name of the Florentine artist, together with a third piece that can be identified under the current inventory number 6364 F, although today it is no longer attributed to him.

In the case in question, the elegant profile of the man can be compared to that of St. John the Baptist in the well-known bronze group showing the Sermon of St. John the Baptist realized by Rustici for the Baptistery in Florence. The left arm holding a staff and the pose of the hand with tapered fingers look very much like the glazed terracotta of the Baptist, now at the Museum of Fine Arts in Boston. There are also similarities in the drapery, not only with the terracotta work in America, but also with the Noli me tangere, a monumental enamelled terracotta group at the Bargello Museum in Florence. Such stylistic elements allow to possibly date the drawing to around 1515-1520.