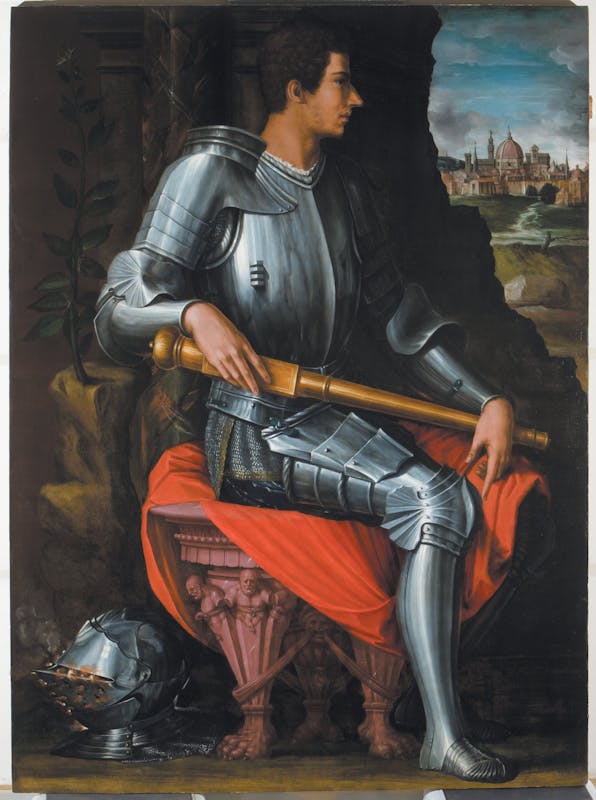 When Lorenzo de’Medici died, Florence entered a period of political instability spanning decades, in which opponents and supporters of the Medici disputed its leadership, taking turns at its helm until 1530. Then, following the alliance of Pope Clement VII de’Medici and Charles V, the opponents of the Medici were defeated by the imperial troops that besieged the city. Alessandro de’ Medici, known as “The Moor”, due to his dark complexion, was the natural son of Lorenzo, Duke of Urbino, brother to the Pope, and a servant of mixed race. However, some believe that he was actually the son of the Pope, who asked the emperor to appoint him Duke of Florence.

This portrait of Alessandro was commissioned to Vasari by Ottaviano de’Medici, probably on the request of the duke himself, similarly to the circumstances that had preceded the commissioning of the Portrait of Lorenzo de’Medici a few months earlier.

Both paintings came with long accompanying letters revealing the allegorical meaning of the works, which aimed to celebrate the Medici dynasty under which the painter from Arezzo would continue to serve as court painter and architect throughout his artistic career.

The young duke is portrayed full figure in a style that was unusual for the period, but in any case, clearly resembles that of the portrait of Giuliano de’Medici painted by Michelangelo in the New Sacristy of the Basilica of San Lorenzo. The splendid armour he is wearing in the painting is the reflection of his qualities, whereas the red cloak draped over the stool symbolises the blood of his defeated enemies. The round stool indicates that his kingdom will be everlasting because his opponents, represented by the herms sculpted on its legs, have been overcome forever. In the background, the city of Florence in flames recalls the siege of 1530, whereas the laurel leaf full of vitality sprouting from the sawn-off tree trunk, a reference to Pontormo’s Portrait of Cosimo the Elder, symbolises the Medici dynasty restored to power and stronger than before, following its exile.

Alessandro’s reign over the Tuscan city was effectively a short one, because on the night between the 6th and 7th of January 1537 he was assassinated by his cousin Lorenzino. When he died, the senior branch of the family died with him, but the power of the Medici family would soon be assured by the rise of the branch known as “Popolano”, with Cosimo I.