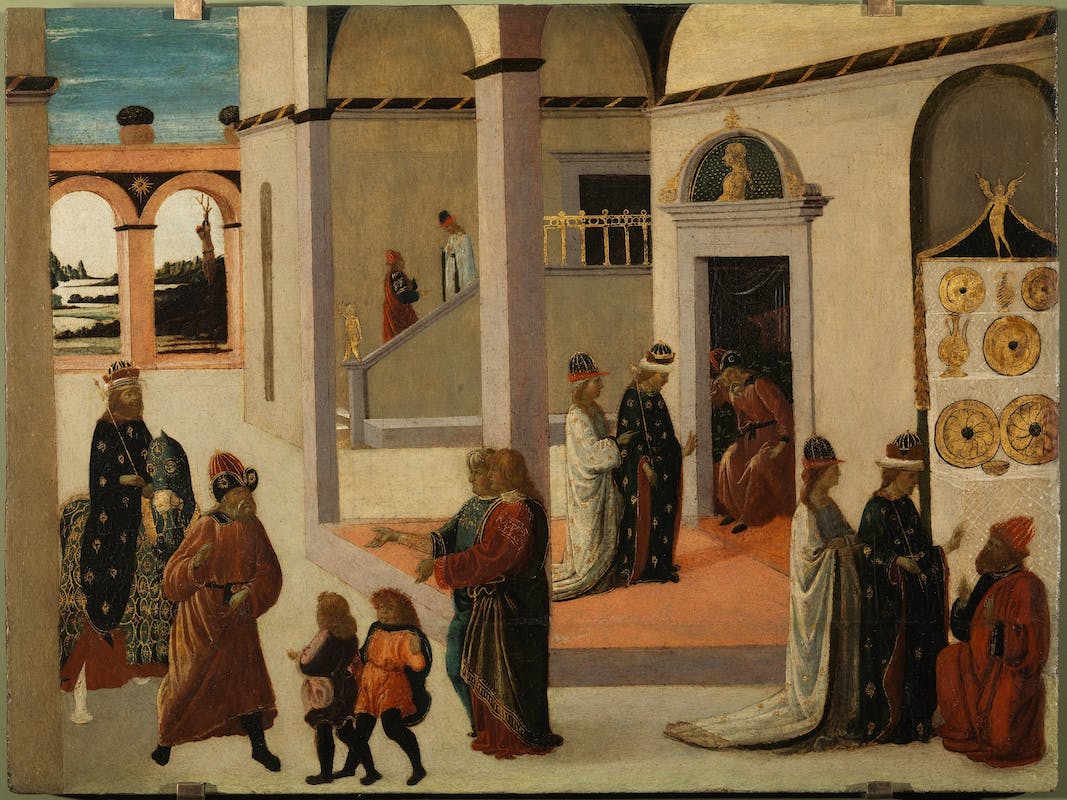 The panel is part of a cycle of paintings dedicated to the story of biblical heroine Esther, who would become the wife of Persian king Ahasuerus (better known as Xerxes) and do her best to protect the Jewish people against a plot organized by a court dignitary. To the right of the panel is King Ahasuerus, accompanying his wife Esther to Mardocheus, her cousin, in order to honor him and thank him for his loyalty, naming him his advisor. A moment from before the story is shown in the background While he sleeps Mardocheus is plagued by dreadful foreboding in his dreams. When he awakes, he hears some court dignitaries conspiring against Ahasuerus, who is quickly warned of their plot. In the background, outside the city walls, we can see a hanged man who may be Aman, Ahasuerus’ advisor who had tried to convince the king to kill all of the Jews and who had been unmasked by Esther, saving the fate of her people. The scene therefore captures different moments in the story and the architecture plays a notable role in organising the narrative and defining the sequence. The painting concludes the story of biblical heroine Esther, illustrated in the three panels by Jacopo del Sellaio and now in the Uffizi (inv. 1890 nos. 491, 492, 493) and the two other panels in the collections at the Louvre in Paris and in the National Museum of Budapest. Esther's story was considered an example for Renaissance women and this subject was often chosen to decorate the furnishings in the bridal chambers of the wealthier classes, such as caissons, beds and headboards. The panels painted by Jacopo del Sellaio were part of these illustrious furnishings, the type of artistic genre in which Sellaio repeatedly engaged.  In response to the tastes of the customers, the artist lingers over the decorative details, using, among other things, lots of gold, and removing all dramatic elements from the tale.

The other two stories of Esther by Jacopo del Sellaio at the Uffizi:

The Banquet of Ahasuerus

The Banquet of Vashti