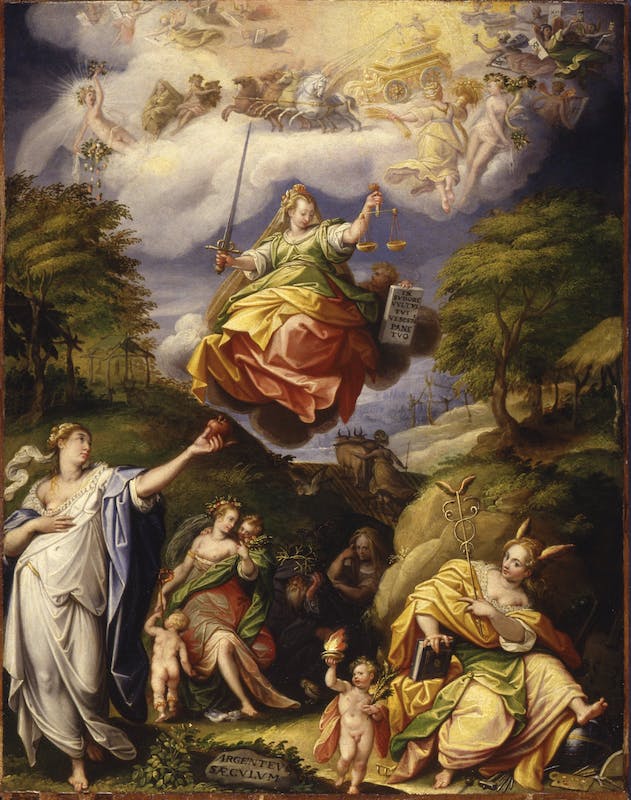 This small painting, together with its pendant depicting the Golden Age, comes from Villa Medici in Rome, which was home to Ferdinando I during the period when he was still cardinal. Based on the available documentary evidence, it appears very likely that both panels were destined to be used as portrait covers.

Having studied under Vasari, Jacopo Zucchi became his main collaborator, participating in the decoration of the Salone dei Cinquecento and the Studiolo of Francesco I in Palazzo Vecchio. In 1572, he settled in Rome, becoming the favourite artist of Ferdinando, who commissioned him to decorate his villa on the Pincian Hill.

Ovid’s Metamorphoses is probably the iconographic source of this small painting: we can guess that the painter, who was extremely well versed in mythography, had first-hand knowledge of this work.

Ovid relates that in the Silver Age, Jupiter took control of the world and divided the year into four seasons. Then, for the first time, men needed a shelter and had to cultivate the land to procure supplies for the winter.

In line with the story related by Ovid, in the background the painting features several rudimentary huts and a farmer tilling a field with a plough; Apollo’s carriage is flying in the sky, surrounded by the hours of the day and night, and by the four seasons. The goddess of Justice sits in the centre with a sword and a set of scales, accompanied by a putto displaying a large panel with a passage from the Book of Genesis inscribed on it (Gen 3:19) “With the sweat of thy face shalt thou eat bread”. The young woman sitting in the foreground on the right symbolises Art and Knowledge, while the tools at her feet, a scalpel, a palette, a compass and a globe, are all references to the mechanical arts. The rake, the ears of wheat and the lit torch carried by the putto alongside her are the attributes of Ceres, the goddess of agriculture. The figure dressed in white on the opposite side, whose adoring gaze is transfixed on the heart raised up to the sky, could be the personification of Charity, while the group consisting of the young girl accompanied by two playful puttos, an old bearded man and a veiled lady, represents the four ages of man. The allegory of the painting therefore aims to illustrate the advent of divine Justice, regardless of the passing of time and of man’s activities.

From a stylistic point of view, this small painting can be dated to the mid-1570s. It features characters gathered at the sides of the scene, leaving the centre free and figures sitting in the foreground that guide the beholder’s gaze towards the interpretation of the composition. The perspective, which views the scene from below, and the way in which the space is constructed diagonally, increase its sense of depth.