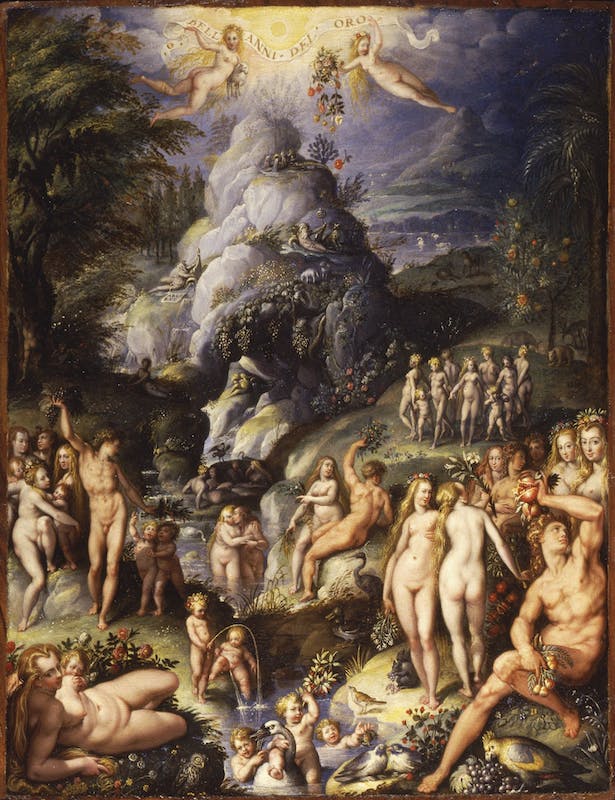 This small painting, together with its pendant depicting the Silver Age, comes from Villa Medici in Rome, which was home to Ferdinando I during the period when he was cardinal. Based on the available documentary evidence, it appears very likely that both panels were destined to be used as portrait covers.

According to classical mythology, the Golden Age was a legendary time in which eternal happiness reined on the Earth. Humans lived in peace with no need for laws. They did not have to tire themselves out by cultivating the land, which spontaneously offered its fruits. And there was no need to build shelters, as it was always springtime.  The Medici family had often used this theme to allude to the prosperity of its governance. Marsilio Ficino, humanist and philosopher at the court of Lorenzo de’Medici, had sung the praises of his Lord, stating that, under his leadership, Florence had experienced the golden age of the arts and the humanities. In 1513, when Leo X, Lorenzo’s son, was elected to the papal throne, a procession celebrating the “triumph of the golden age and century” was held in the city.

In the painting, the motto that appears in the scroll held by two young girls hovering in the air is a reference to the title of the musical interlude sung in 1539 during the celebrations for the nuptials of Cosimo I and Eleonora di Toledo. The song “O bell’anni dell’oro” had already inspired another painting with a similar subject by Francesco Morandini, or “il Poppi”, based on a drawing by Vasari. Poppi’s painting was part of a series created by Vasari and the artists in his circle for Francesco I de' Medici, Grand Duke of Tuscany, featuring subjects based on the writings of Don Vincenzo Borghini, the learned prior of the Ospedale degli Innocenti. Finding inspiration in episodes taken from classical mythology and Ovid’s Metamorphoses, Borghini had developed a series of “inventions” laced with complicated allegorical meanings designed to celebrate the emerging “talents” and the great Medici governance.

Having studied under Vasari, Jacopo Zucchi became his master’s main collaborator, participating in the decoration of the Salone del Cinquecento and the Studiolo of Francesco I in Palazzo Vecchio. In 1572 he settled in Rome, becoming the favourite artist of Ferdinando de’Medici, who appointed him to decorate his villa on the Pincian Hill.

In this painting, Zucchi takes inspiration from the kind of composition typically used by Vasari, portraying small groups of figures dancing or embracing one another on the banks of a stream. However, as a whole, his subject displays a closer similarity to Ovid’s Metamorphoses, a work of which the painter is likely to have had first-hand knowledge, being able to use it as an iconographic source. And indeed, we should not forget that Zucchi had an in-depth knowledge of mythography, as he demonstrated a few years later when he personally devised the decorative plan of the Genealogy of the gods fresco in the gallery of Palazzo Rucellai (now Palazzo Ruspoli) in Rome.

In terms of style, the painting presents the characteristics of the artist’s works completed in the mid-seventies: figures with rhythmic gestures, a scene perceived from the bottom and the diagonal construction of the space, designed to increase the sense of depth.