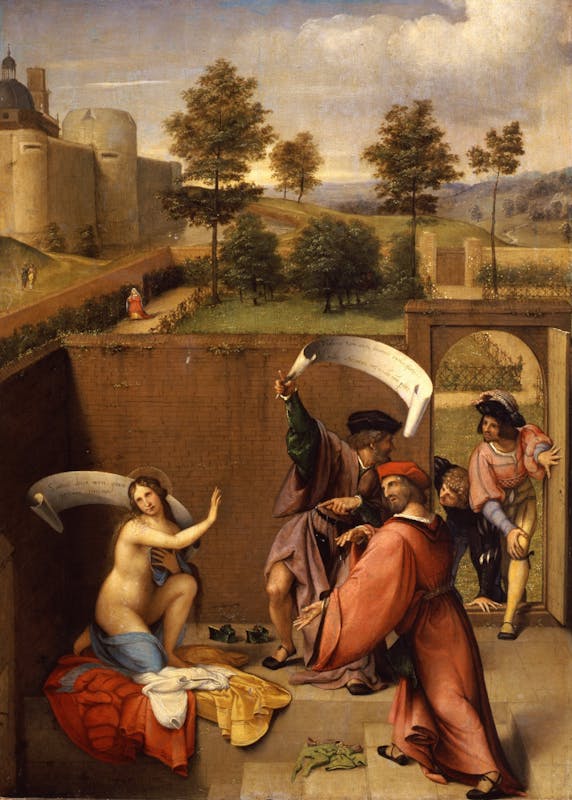 The episode, set in a vast landscape, bordered by a fortified wall, “alla moderna”, is taken from the Old Testament (Daniel, XIII, 1-64): Susanna, the beautiful and chaste bride of Joachim, a rich Jew, is propositioned by two elders whilst taking a bath in her garden. In their attempt to take advantage of her, they threaten to accuse her publicly of adultery. Only the intervention of the prophet Daniel, who questions the two old men separately and since they contradict one another, they reveal their lie and prove Susanna’s innocence.

In the painting, Susanna has removed her clothes and can be seen kneeling in a position comparable to that of the Crouching Venus, familiar through the Roman copies of the 3rd century BC Greek original. With her arm outstretched, Susanna wards off the two old men and pronounces the phrase on the scroll: Satius duco mori, quam peccare (I would rather die than sin). One of the elders then pronounces the unfounded accusation of adultery: “Vidimus eam cum iuvene commisceri, ni nobis assenties testimonio nostro peribus“ (We bear witness that we have seen her lay with a youth, who then fled). The two scrolls make direct reference to the biblical text of the Prophet Daniel, translated into images in the painting.

There is an evident message in praise of feminine virtue and justice, transmitted through the work using a formal language that is strongly influenced by accents of Leonardo da Vinci. Susanna’s clothes, spread over the ground, are emphasised by the light, transformed into colour using transparent shadows. They are offered up to our view as an important document of Italian fashions in women’s clothing in the 16th century. The white shirt, a garment in direct contact with the skin, is placed over the yellow skirt and stands out from the red dress with folded hem that served to conceal small amulets. Further away from the woman’s body, in the foreground, are the bright green stockings and the white “leg straps” or garters. In the background, are the “pianelle” - shoes without heel that in their most prestigious form could have a notable height - which are also green, perfectly matching the stockings.

Susanna and the Elders by Lorenzo Lotto

The Old Testament's episode in the painting by the Venetian master