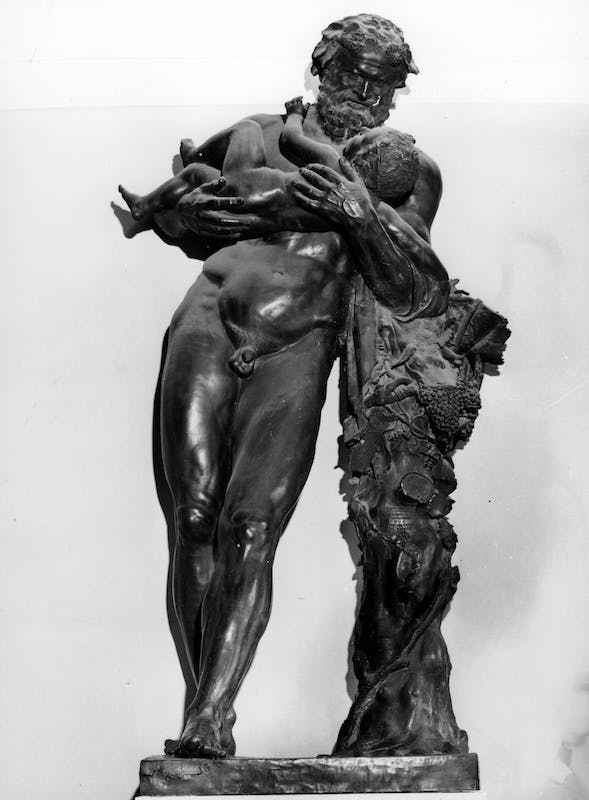 Greek mythology described Silenus, son of Pan, god of the wild, and of a nymph, as an elderly, fat, bald figure, often depicted as having animal-like features, such as donkey’s ears and goat’s hooves.  A lover of wine, music and song, many believed him to be attributed with extraordinary wisdom and the gift of divination. Due to these gifts of his, Zeus chose him as the teacher of young Dionysus, his son born from his affair with the human Semele.

In the middle of the 16th century, a large marble statue was discovered in Rome, a Roman copy of a bronze work by the famous Greek sculptor Lysippos, which had been lost. The statue, now preserved in the Louvre, presents an unusual iconography of Silenus, portraying him as an elderly hero who still has a strong body, lovingly holding a young Bacchus in his arms.

Ferdinando de’Medici, still a cardinal at the time, obtained permission from the owner of the marble work to make a cast with which, according to the documentary evidence, Jacopo del Duca would have created the model for a fusion in bronze. Compared with the ancient version, the modern sculpture appears animated by an all-new naturalism: the facial features and body muscles seem brighter, the beard and hair are more accurately defined. The tree trunk on which Silenus is leaning is enriched by the addition of a vine creeping up it in a luxuriance of bunches of grapes, leaves and tendrils. The commissioner also had a scroll added, bearing an inscription taken from the Aeneid: “Wars, peace are my trade: so, under your far-sighted leadership, I will reveal the mysteries of destiny set to come in the future.” This quotation, which refers to Silenus’s gift of divination, could be interpreted as a tribute by Ferdinando de’Medici to his father Cosimo, Grand Duke of Tuscany.  The original idea of using the statue as a fountain had in fact been abandoned even before the fusion was completed, and it is reasonable to presume that Ferdinando had decided to give it to the Grand Duke as a gift, perhaps because the group was a rare portrayal of a father and son, even if the roles of the protagonist were only presumed.  But Cosimo’s death in 1574, the period in which Jacopo del Duca completed the sculpture, meant that this was not possible, and the work was located in Ferdinando’s villa on the Pincian Hill, where it remained until its move to the Uffizi.