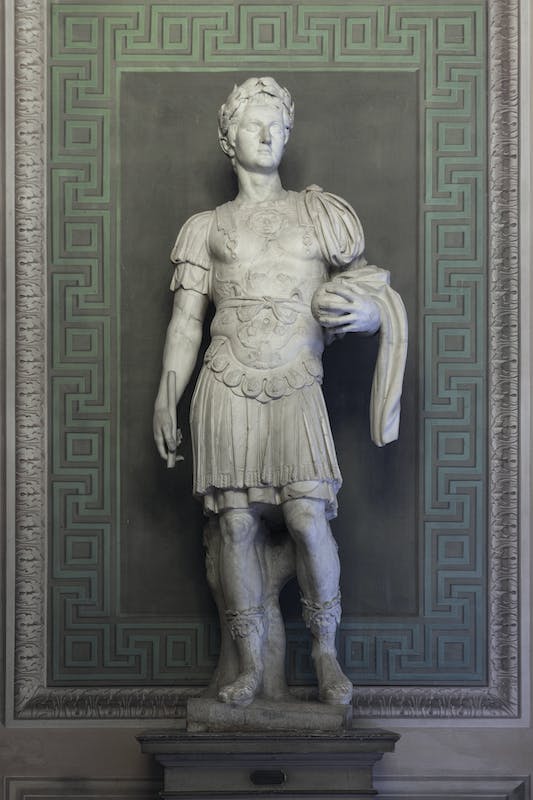 This piece was initially part of the Della Valle-Capranica Collection in Rome and was bought in the late 16th century by Ferdinando de’ Medici, who probably commissioned the restoration before placing it in the Villa Medici on the Pincio Hill, as part of the decorative scheme for the front of the villa overlooking the garden. It remained there until the 1780s, when it was taken to Florence.

The additions include the arms, hands and attributes (the rod held in the right hand and the imperial symbol of the globe in the left); the legs, starting from the hem of the tunic and lastly, the crowned head, the features and curls show the influence of the portrait model of Augustus.

The breastplate (lorica), the only ancient part, reproduces the muscles on chest and abdomen, going as far as to suggest the concavity of the navel: it is an example of a lorica musculata, with sober decoration, characterised by the head of Medusa (gorgoneion), a protective element of good luck. The top part has two griffin heads facing each other in the centre;  lower down, an acanthus shrub with floral volutes which have clean, linear designs that echo and stress the rounded profile of the bottom part of the armour. These elements, together with the belt (cingulum), destined to hold a sword or dagger, can be found on some images of emperors in armour from the Antonine era. Even the detail of the short protective flaps under the armour (so-called pteryges), which are rounded and decorated alternatively with a lion’s or eagle’s head, are very much like a decorative pattern that, together with the sleek physical nature seen on this example, is frequently found in imperial statues in armour, which can be dated back to the late 2nd century A.D.