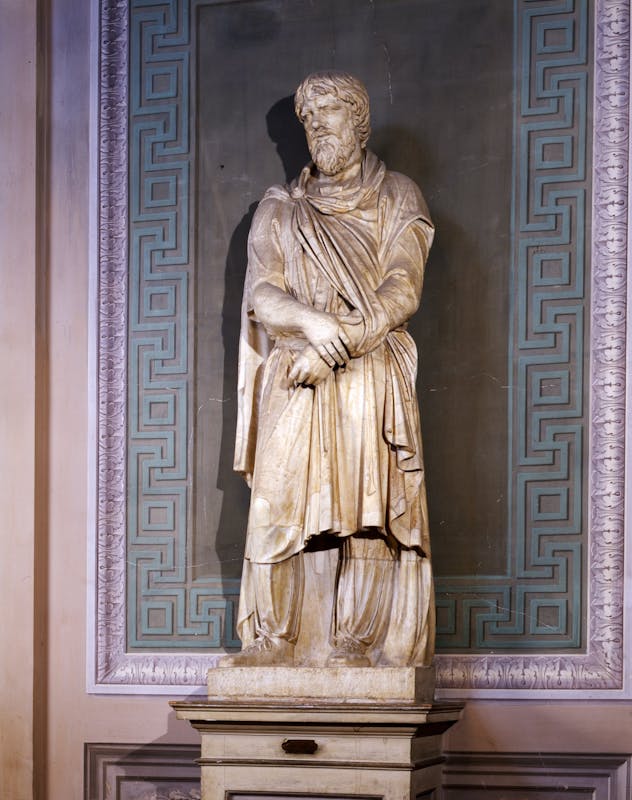 The statue, once in the Roman Della Valle-Capranica collection, was bought by Ferdinando de' Medici and placed in Villa Medici on the Pincio Hill before being moved to Florence prior to 1823. Of the four Dacian prisoner figures in Florence, the one inside the Palatine Gallery is the only one to be entirely made from white marble. The statue, like the others, shows a bearded man dressed in a tunic, cloak buckled over his right shoulder, and trousers (bracae) down to his ankles.

Although it is firmly secured to the body by a filled section, the head is ancient and from the original statue: like one of the two Dacians in the Boboli Gardens. In this case too, the man has a bare head and is characterised by a bowl shaped haircut, which is rather rare in iconography of this type. The Palatine statue is very much like the barbarian in the Boboli Gardens, particularly in the dimensions of the face.

It is possible that this statue was part of the sculpted decorations at the front of the Basilica Ulpia. This was on the south side of the Forum of Trajan, the emperor who conducted a successful military campaign against the Dacians in 101 and 106, concluding with their surrender and the Roman conquest of their land, the modern-day basin of the Carpathian mountains. The other figures of “Barbarians” of similar size to the one in the Palatine Gallery also come from the Trajan buildings in Rome. They have the same flat back, worked in the centre, probably to insert them into a wall. The significant differences in style of these Dacian statues could be due to the fact that they come from different workshops, all working on decorative elements at the same time.