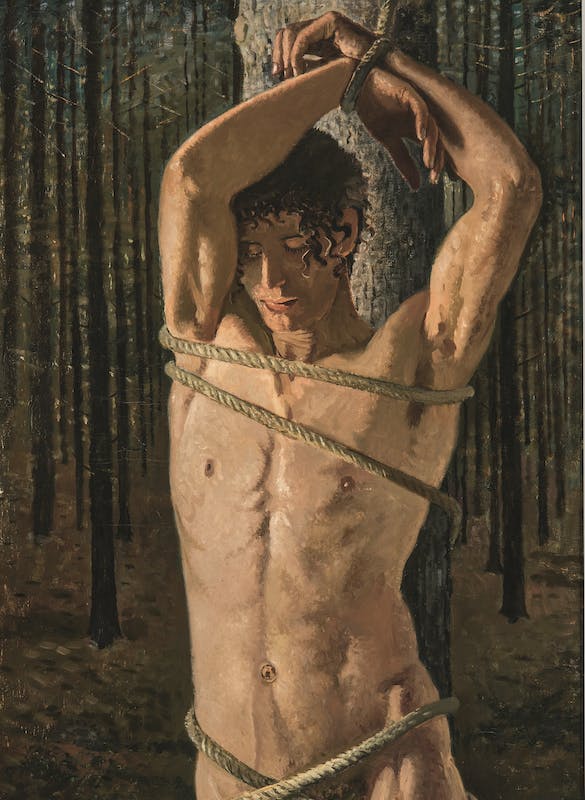 Giovanni Colacicchi painted his St Sebastian in 1943 when, evacuated with his family to Vallombrosa, he was a guest at the Casa al Dono of art historian Bernard Berenson. Today, the memory of those modelling sessions is kept alive by a photograph of the set in Berenson’s studio and the story of its creation related by Flavia Arlotta, the artist’s wife. Arlotta remembered how the model, Guido Fabiani, tied to a tree trunk with a sawn tree stump under his feet, despite the apparent discomfort caused by the position, would often tend to doze off, and of how instead, one day, a friend, finding the house empty, had been very frightened, believing that he was being tortured. On the other hand, those were dark times: soldiers and fleeing Jews would pass through Casa al Dono and Colacicchi, refined painter and professor at the Accademia di Belle Arti in Florence, could not help but reflect, together with Berenson, on the role played by beauty and culture in the face of the drama of the war. The subject he chose was Saint Sebastian, the ultimate saint of healings, who had miraculously survived the arrows of martyrdom thanks to Irene’s care, and had in turn been elevated to the level of martyr of the cult and protector from the plague. The origins of his healing powers were uncertain, but they were developed, above all, following the epidemics that had broken out in Rome and Pavia in the 7th century, which had miraculously been stopped by the invocation of the Saint. Colacicchi’s choice was not so much driven by the desire to portray a wonder but more by the possibility of trying his hand at creating that canon of ideal beauty that had characterised the iconography of St Sebastian since the Renaissance. Colacicchi would perhaps have had time to think about this during his studies, printed in that same year, 1943, on Antonio del Pollaiolo, author, together with his brother Piero, of a famous version of the martyrdom, today preserved in the National Gallery of London. However, the artist chose not to use the typified element of the arrows strongly rooted in the hagiographic tale of the 5th century, which described the martyr as pierced by so many arrows that “he resembled a hedgehog”. Here, nothing violated the beauty of the body presented by Colacicchi, intensified by the raking light that arrives from the left, languid and and sensual in line with the modern reinterpretation activated in 1911 by Gabriele D’Annunzio’s Le martyre de Saint Sébastien. In D’Annunzio’s work, the young body of the Saint, brought on to the scene by Ida Rubinstein, embodies human perfection, of both the aesthetic and moral kinds. Colacicchi would also subsequently feel the need to strip the painting bare of its religious value. In fact, he would name it Man tied up, thinking back, as Flavia Arlotta would write, “about what was happening around us while he was painting it, and about the partisans”. Dark times indeed, also obscured in the thick Vallombrosian pine wood of the background (so different from his usual tributes to the “Sun God”) but contrasted by the artist’s perceptions of the spirit and of beauty as intangible.