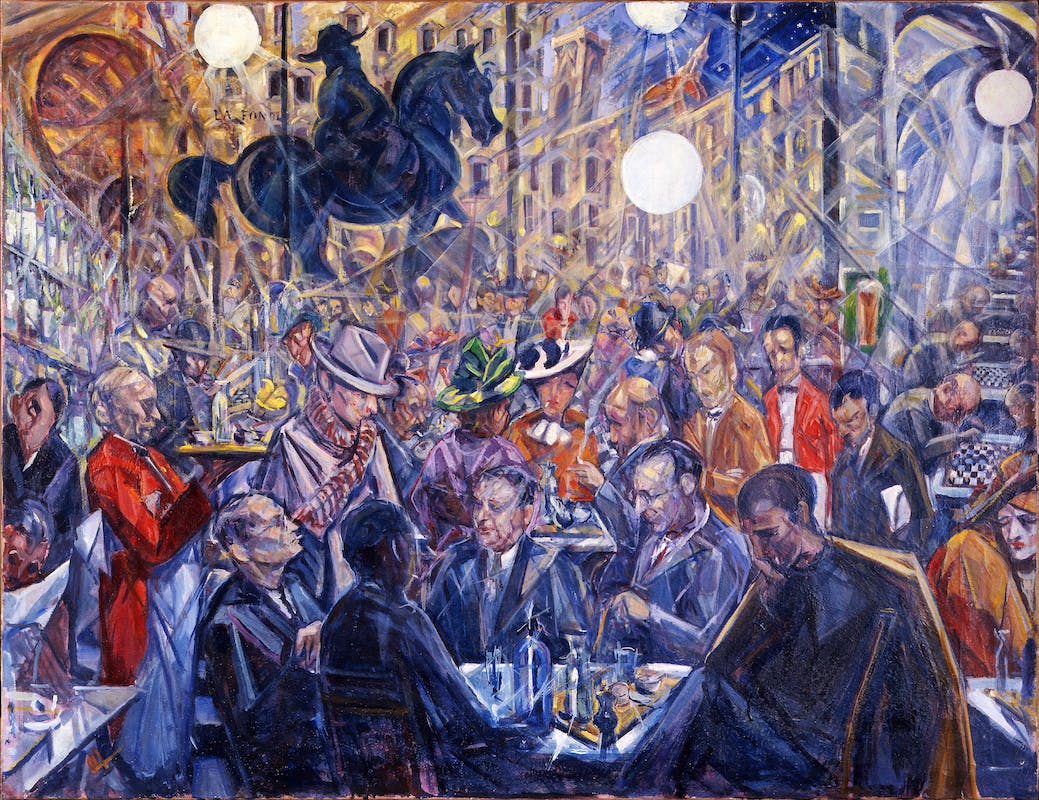 In the modern Piazza della Repubblica (at the time called Piazza Vittorio) in Florence, in the 1910s the Caffé Giubbe Rosse hosted animated debates on futuristic avant-garde art. Here, Baccio Maria Bacci developed his own futuristic style which he revived over a decade later in the long production of this painting. In Florence during the Fascist era, Bacci recovered the futuristic mood to describe the café, which was still a favoured meeting place for leading literary figures; indeed, the work features the authors of the “Solaria” magazine (to which Bacci also contributed), namely Raffaello Franchi, Eugenio Montale, Arturo Loria, Elio Vittorini, Alberto Carocci and Alessandro Bonsanti, a renowned Director of the Florentine Gabinetto G. P. Vieusseux (prestigious scientific-literary institution).

The painting is stylistically unusual when compared to his artistic language of the 1930s, dividing the scene into wedges, points and bands of light, repeating certain aspects and avoiding others. The result is a lively and ironic interpretation of this delicate moment of history, when the elegant cultural atmosphere of the “Solaria” entourage sought action and independence, concentrating on purely literary interests which avoided the control of the regime. The words of Bonsanti, written in 1968, are worthy of note: if one observes that “great spheres of light hang above the crowd, the ironic hint towards the Futurist poetry and tradition in the balloon show is easily understood”. In the centre on the right, there is “a black, snakelike figure with a nineteenth-century top hat [who] inclines his neck in the manner of someone who, by profession, is charged with eavesdropping in order to report back to those concerned”.