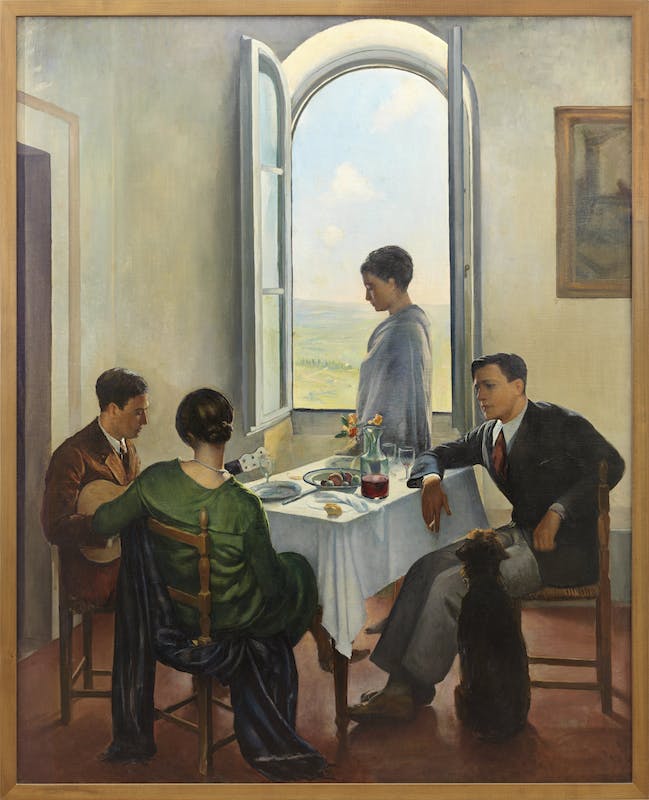 A peaceful postprandial scene: four friends are chatting around a table in a house that is easily recognisable as the painter’s home in Fiesole, near Florence. As well as Bacci, who has painted himself seated on the right, with his dog in front of him, are the artist Guido Peyron, with guitar, and the artists’ wives.

Baccio Maria Bacci was born into a family of artists and after his beginnings with the international avant garde, began to take an active part in Futurism, and after significant periods in Paris and Switzerland and the First World War, he settled in Fiesole. His references - in this period - are the oldest, traditional Renaissance and the more recent, Macchiaioli. Both inspired the artist to create a style with a solid, harmonious spatial and volumetric approach. He exhibited with a personal room at the 1921 Fiorentina Primaverile, where critics appreciated his “purified naturalism” and pointed out his desire to “restore to painting those decorative, architectural, and stylistic elements that had been banished by the partial, ephemeral aesthetic of impressionism.” (Mario Tinti). Throughout the 1920s, he continued to produce work as one of the “Gruppo Novecentesco Toscano”, in the style of that particular classicism that renewed the Macchiaiolo traditions with its matrix of 20th-century values.

“Afternoon in Fiesole” is a work that is emblematic of these values and of the concept of the painting, as already highlighted by Tinti in 1921, “as a total expression - story, poem, novel”. The different painting genres, the portrait, the still life on the table top, the genre scene and the painting of a reassuring landscape of the very Tuscan hills seen from the room, come together within the space of the painting, while a warm light, painted from life sits evenly over the whole composition. The painting was donated to the Uffizi Galleries by the artist’s children Francesco, Lorenzo and Quirina Bacci, in 1981, as part of the celebrations for the Galleries’ fourth centenary.