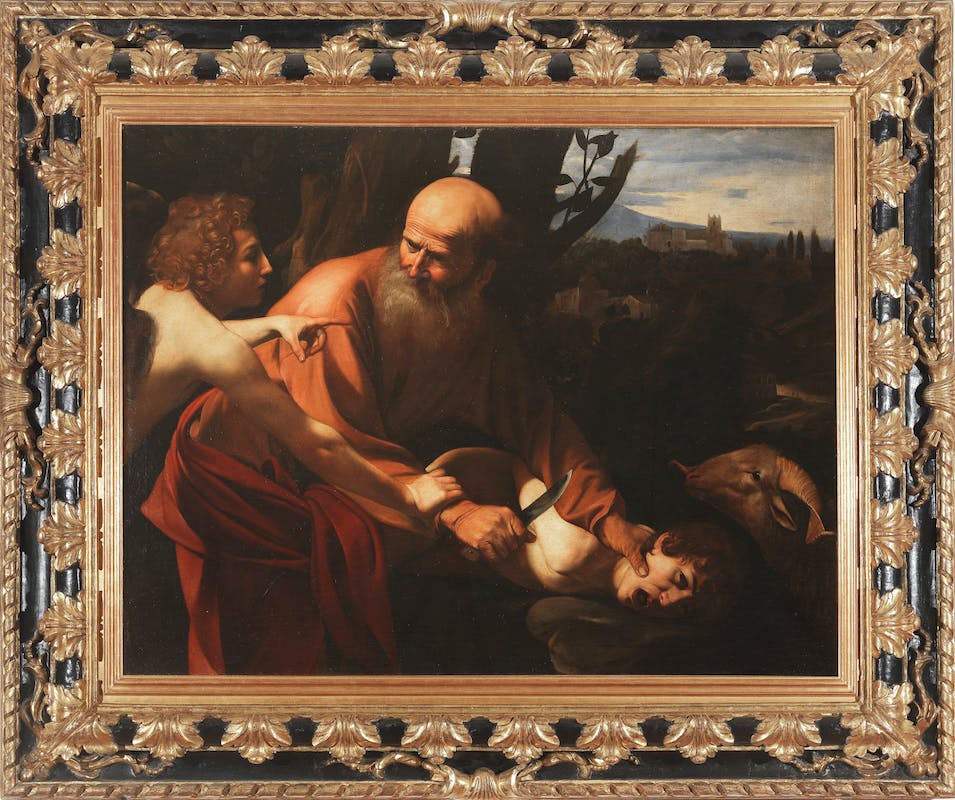 The painting illustrates the passage of the Old Testament in which God ordered Abraham to sacrifice his only son, Isaac. Caravaggio faithfully depicts the crucial moment of the dramatic story, when Abraham, at the very moment in which he is about to sacrifice Isaac, is blocked by an angel sent by the Lord. “"Do not lay a hand on the boy," he said. "Do not do anything to him. Now I know that you fear God, because you have not withheld from me your son, your only son." God’s messenger says to Abraham (Genesis 22, verse 12) pointing with his left hand at a ram to sacrifice instead. Caravaggio chose to humanise the angel’s figure, placing him alongside Abraham as a solid presence that firmly grips the old man’s wrist. In the background is a hilly, Mediterranean landscape, with small roads and farm animals, and a small village. Critics have identified echoes of the style from Caravaggio’s training in Lombardy and Veneto regions. In the past, this work has also been subject to a symbolic interpretation according to which the building on the hill is a church with baptistery, a reference to the future birth of the Catholic church, while the light diffused over the backdrop, symbolises the light of divine grace. The sacrifice of young Isaac serves, therefore, to foreshadow the sacrifice of Christ. The biblical theme was certainly chosen by the work’s illustrious client, Maffeo Barberini, influential Cardinal and future Pope Urban VIII. Critics have all declared this to be an authentic Caravaggio, an attribution that is also confirmed by the payments made to the painter by Maffeo Barberini himself.

The painting was donated to the Uffizi in 1917, by John Fairfax Murray, who had purchased it as a work by Gherardo delle Notti, from a company that had bought up a part of the possessions from the Colonna Sciarra family from Rome, in the late 19th century.

The Sacrifice of Isaac by Caravaggio

Video in Italian | Abraham is ready to kill his son but an angel stops his hand just in time...