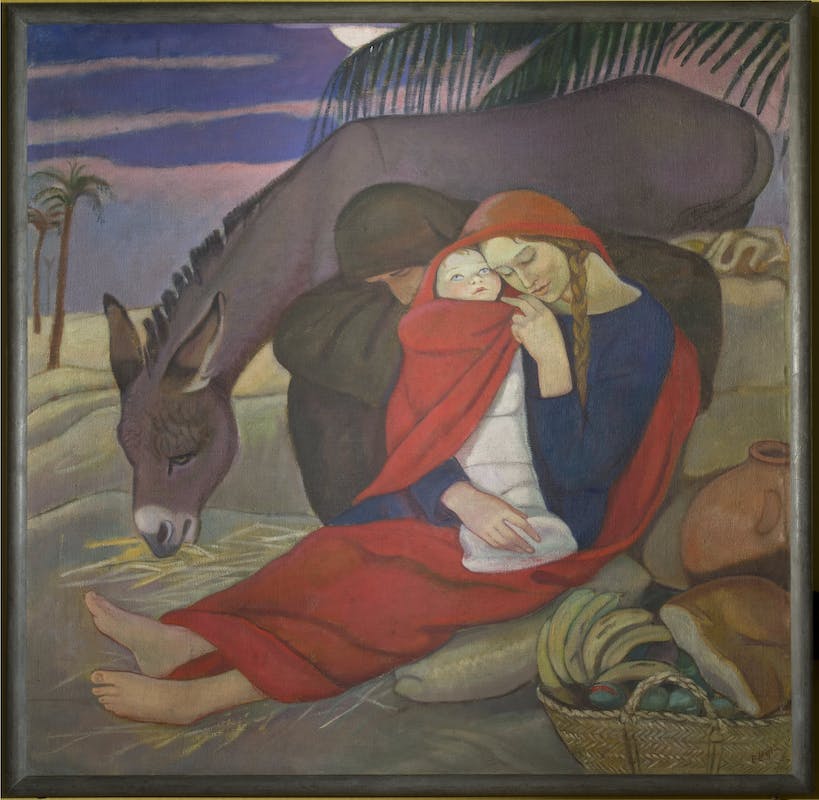 French by birth and naturalized Florentine, Elisabeth Chaplin grew in a prolific cultural milieu: her grandfather and uncle were painters and her mother a poetess and sculptor, as well as a friend of Maurice Denis and the symbolist painters. From the 1920s, Chaplin began to combine hints of paganism and late-mediaeval references with formal synthetism and symbolist tones to arrive at a personal interpretation of religious themes with respect to iconographic tradition. This painting, an example of this current, was presented at the Salon d’Automne in 1924 with the unconventional title of “Oasis”. The figures of the Holy Family, as if wrapped in an embrace, huddle together in the peaceful intimacy of a moment of rest. The elements taken from the symbolist vocabulary are the artist’s use of color, applied in large, vividly even expanses, and the shape of the composition, set out within a harmonious twisting movement that, from the outside, converges onto the focus of the image, where the heads of Mary and the Child are gently touching. As well as the title, other details contribute to the unconventional interpretation of the subject (to the extent that the work was contested on account of the irreverence shown by the artist): the desert palms that stand out against the pink desert sunset and the still life created with the basket of bananas and figs in close up.

After the criticism received in France, the painting was shown at the Venice Biennale in the same year with the title changed to a more appropriate “Rest on the Flight to Egypt”.

This piece is part of the large number of works donated by the artist and her family to the Gallery of Modern Art in 1974, as a gesture of gratitude and love towards Florence, Chaplin’s adopted home.