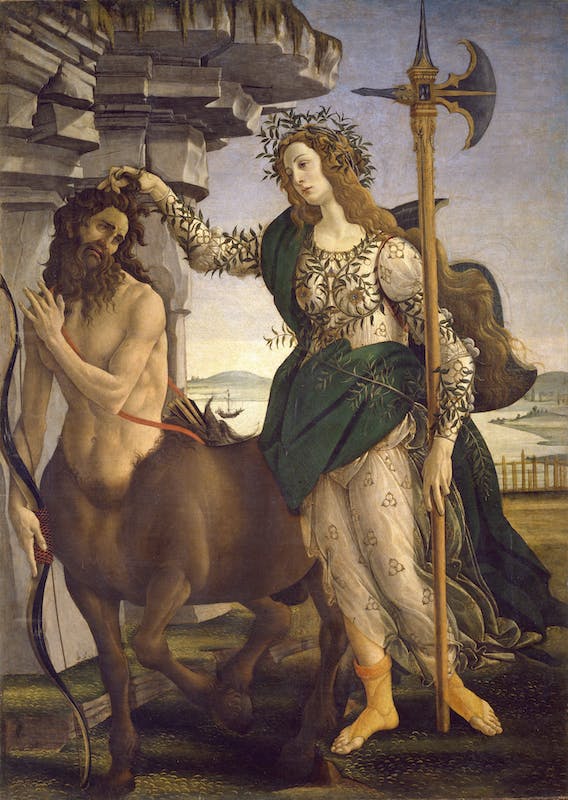 Like Botticelli’s other paintings with a mythological subject, this work too, showing the young woman armed with a battle axe, intent on dragging a centaur by the hair, presents many doubts in terms of interpretation.  Based on what is written in inventories and literary sources from shortly after the creation of the painting, the attractive, proud feminine figure is thought to be Pallas Athena (Minerva), goddess of knowledge, or Camilla, virgin and warrior, who died in battle defending the country, as well as being a fine example of chastity.

The centaur, a mythical creature, combining man and beast, symbolises the feral instincts of humanity and therefore, the work is to be understood as an allegory to virtues that act as a brake on a bad-tempered, passionate temperament.

A young woman wears a dress with repeat decoration of the three-ring insignia of the Medici family. Her face is surrounded by plant shoots, perhaps the olive that was consecrated to Pallas or the myrtle, a plant associated with Camilla. The painting belonged to the Medici, to Lorenzo di Pierfrancesco, cousin of Lorenzo the Magnificent, and it may have been commissioned on the occasion of his marriage with Semiramide Appiani in 1482.