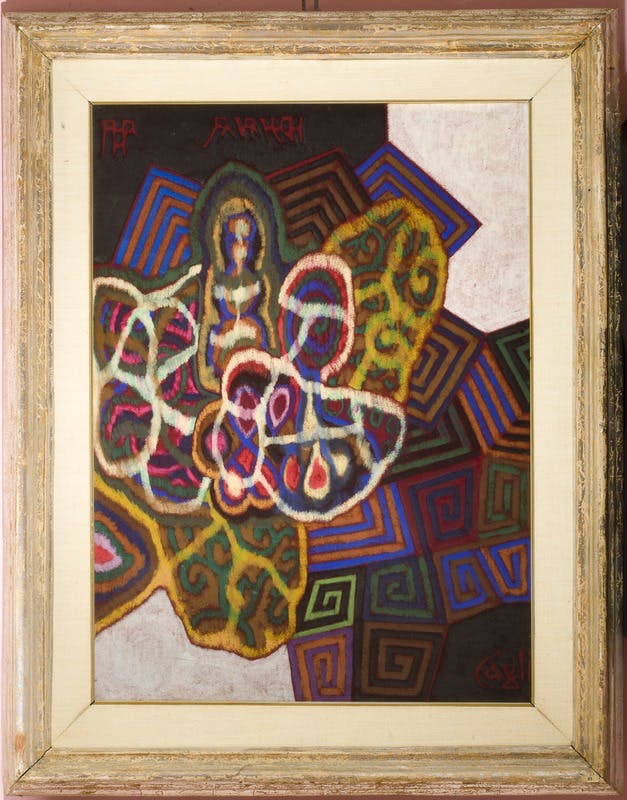 In the Thirties he was at the heart of the artistic debate with the appeal "Muri ai pittori" and the poetics of the primordial way of thinking, intended as a way of recovering the ancient and the legend beyond the ranks of the classicism of "Novecento". Instead, from the end of the Forties, he alternated between figuration and abstraction, polemicizing on the sterile - but prevailing - opposition of the two approaches. In a 1965 interview, shortly before the execution of Nadir, Cagli reiterated in fact that painting is endowed with an inherent vitality that makes every experience possible; the artist is therefore obliged to test a dialectic that is much more complex than the abstract-figurative dualism. Only in this way can he explore the "magma of contradictions", and so amaze himself and serve others, as required by the sense of responsibility towards history that pushes him into unexplored terrain.

Nadir encloses a multitude of decorative expressions in the small space of the canvas , marked on superimposed planes: the Greek geometries of the background patterns that recall the meandering lines of Alberto Savinio; the graphic elements drawn from an arcane and primordial alphabet; the warp of light, sign and colour that emerges on the surface.

The work was presented for the first time in 1967 at the exhibition in Arezzo and Rome "Burri, Cagli, Fontana, Guttuso, Moreni, Morlotti. Sei pittori italiani dagli anni 40 ad oggi" (Burri, Cagli, Fontana, Guttuso, Moreni, Morlotti. Six Italian Painters from the 1940s to the present day), during which the critics reaffirmed the coherence of the artist's path between the end of the 1940s and the 1960s, thus defeating the reductive framing of his art within the formula of eclecticism. Nadir, which shares astronomical forms and themes with other canvases of the period, also takes its cue from research dating back to twenty years earlier and in particular from a series of drawings on the fourth dimension dated 1948-1949.

The canvas joined the collections of the Gallery of Modern Art following his victory in 1969 at the Premio del Fiorino in an edition which, having become biennial and international in scope, brought together more than one hundred and fifty exhibitors, purposely chosen from the opposing "figurative" and the "non-figurative" ranks. In choosing Cagli as its winner, the Premio confirmed the (albeit moderate) attempts made to update the award in the 1963 and 1967 editions when Vinicio Berti and Sergio Scatizzi triumphed. Even though Cagli was not Tuscan, he had a close relationship with Florence. In fact, the Premio anticipated the artist's renewed collaboration with the Maggio Musicale Fiorentino, in which he created the costumes and sets for Igor Stravinsky’s Perséphone in 1970.