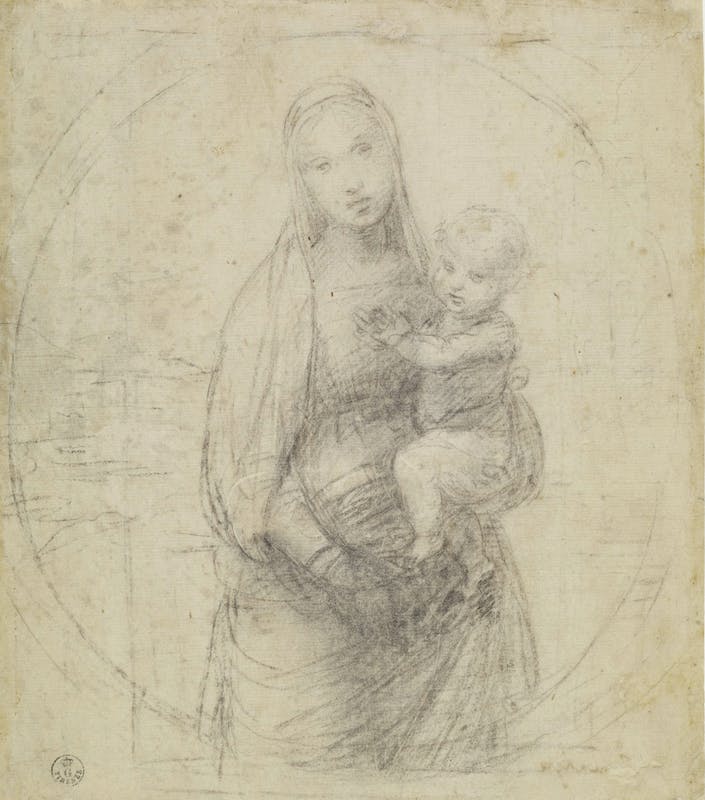 Madonna with Child (study for “The Grand Duke’s Madonna”)

In this sketch, it is possible to follow the creative process of the artist who, before realizing his definitive pictorial composition of the work, considered numerous possibilities. In early studies, he framed the Virgin and Child in a landscape set within an initially circular and then oval frame, before later opting for the rectangular shape used for the painted version. In the sketch, the Madonna holds her son with her left arm, while her right hand rests in her lap in a pose which, like the clothing, is reminiscent of the circular frame used in the first study. In the final painting, the relationship between the figures has been altered: the Virgin holds the Child with both arms, her bust is positioned more frontally and their heads are closer together, creating a pose which denotes a certain influence by fifteenth-century masters, in particular Perugino and Luca della Robbia. The naturalism of the scene is emphasized by the strokes: the lightly applied black chalk outlines the figures with an accentuated chiaroscuro which appears to be inspired by Leonardo.

The works featuring the Madonna with Child dating back to Raphael's time in Florence have been interpreted as essential moments in the artist's search for increasing monumentality, dynamic and varied compositions and his study of “subtle emotional shades”. Moreover, in this study it is possible to observe what Giorgio Vasari defined as the “gift of the grace of heads”, through which Raphael managed to transcend the variety of individual human emotions in his religious and historic works to create universal characters.

More info on the Euploos