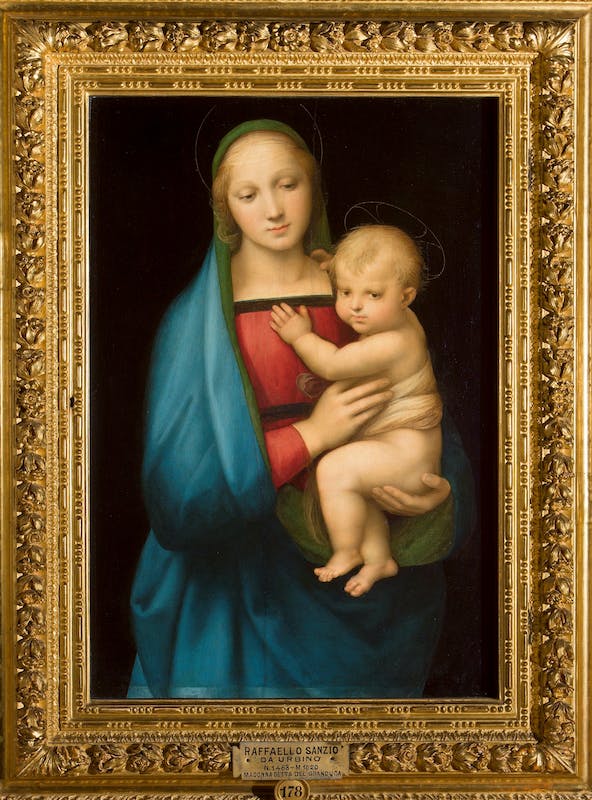 The Madonna del Granduca is one of Raphael’s most famous works and one of the images identified with the Palatine Gallery, the museum with the world’s highest number of canvases and panels by the artist. It is one of Raphael’s best-loved works, in which he shows all of his skill in representing holy subjects in an immediate, human manner. On this panel, the Virgin Mary is depicted standing, with the Child in her arms. Her melancholy gaze is directed downwards as she holds her child out towards the onlooker, inviting him or her to contemplate his sweet, serious face. The gestures of the two subjects are measured; in spite of its simplicity, the whole composition conveys the deep affection that binds them, as well as a painful awareness of Christ’s future sacrifice.This picture was painted by Raphael in 1506-7, during his stay in Florence (1504-1508), when Michelangelo, Leonardo and Fra Bartolomeo were producing their own masterpieces in the city. Raphael, who trained under Perugino, matured in this period and on several occasions, he used the Madonna and Child as a subject, together with the young St John or St Joseph, painting in a more monumental, volumetric style, obtained using Leonardo’s subtle, blended chiaroscuro, and stimulating his attention for expressions of affection towards a greater emotional intensity. To complete this small yet precious painting, Raphael was able to draw on a wealth of Florentine iconography: the countless Madonnas and Child in terracotta, stucco, wood, marble and even bronze, which the masters of the 15th century, such as Donatello, Ghiberti and Luca della Robbia had produced in large numbers to meet the needs of devotional images to place in the churches, chapels, street tabernacles and rooms inside the palaces of wealthy customers.The composition did not start out with a dark background: x-ray images taken by the Opificio delle Pietre Dura have revealed that under the black surrounding the figures, there was an interior with a pillar supporting arches and a glimpse of countryside to the right, as can be seen in the Madonna of the Pinks or the Madonna with Beardless St Joseph in the Hermitage (St Petersburg): a setting that accentuated the domestic tone of the painting. It is plausible that after completion, to bring the work into line with changing tastes, the painting’s background was eliminated to leave the central group in the magnificent isolation we see today.

This famous painting, whose origins and customer are unknown, takes its name from Ferdinand III, Grand Duke of Tuscany (1769-1824) who authorised its purchase between autumn 1799 and winter 1800, when it came to Pitti. It never moved from here, except during the period of Napoleonic rule, when Ferdinand took it with him in exile. The Grand Duke’s family was particularly fond of the painting and on the court’s return to Florence, it was displayed in the private rooms of Pitti Palace, and the Grand Duke only allowed it to be shown in public when he was absent from Florence. In 1882 the painting took its place where we see it today, in the Saturn Room.

The Madonna of the Grand Duke by Raphael illustrated in Latin

Video in Latin | Alessandro Muscillo illustrates in Latin how this masterpiece remains invisible to the eyes and how it turned out to be also...mir...