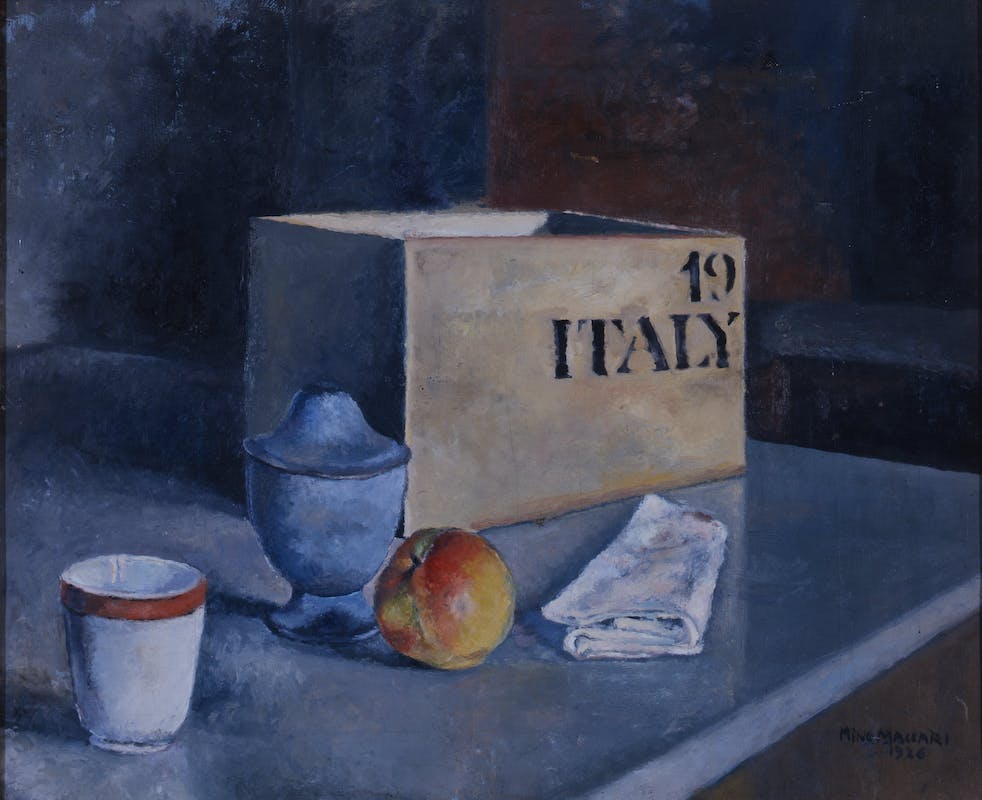 The canvas, dated 1926, documents a temporary rapprochement between Mino Maccari and his friend Ardengo Soffici and the research on form that characterised the early post-war period following the "intemperances" of the Futurist season. The painting almost seems a tribute to Soffici’s “Still Life with Apples and a Glass of Wine” and his “Still Life with Pearss and a Glass of Wine”, the "ovalini" (so called because of their shape), dating back respectively to 1919 and 1920. In those works, Soffici returns to meditate on Cézanne no longer as the father of the avant-garde but as a model for a type of realism anchored in nature, in a line of tradition that spanned from the Macchiaioli to as far back as Masaccio. It was a vision that combined the pursuit of the true and the simple with an open disposition towards the common man and the masses, who often remained alien to the elitist poetics that had marked the turn of the century. This new sensitivity also marked the birth of the magazine "Il Selvaggio" in 1924, of which Maccari was the main animator until 1943. His intense production of drawings and engravings for the publication were often satirical, perfectly combining image and text. The similarity of the canvas to Soffici's style was framed by the events of 1926, when the editorial staff of "Il Selvaggio" were moved to Florence, and Maccari gave the magazine a "strapaesana" or ultra-rural makeover, contemplating, under the aegis of his friend, the exaltation of the traditions and customs of the Italian rural province. However, the artist’s desire to leave his own mark proved unwavering and he breaks the silent, precious vision of the foreground by adding the printed wording "19 / ITALY" a reference - probably with the intent to mock - to the Futurist pasts (now disowned) of many of the standard-bearers of twentieth-century classicism.

The work was purchased for the collections of the Gallery of Modern Art in 1961, coming from Corrado del Conte, the owner of the Galleria Il Fiore, a historic exhibition space in Via della Pergola which, at the turn of the Second World War, gave the city the impetus it needed to evolve, exhibiting promising young artists alongside the masters of modern art. The choice of the Purchasing Committee showed the will to document the artist’s multifaceted personality, even beyond the strongly caricatural expressionist formulations that mostly distinguished his production.