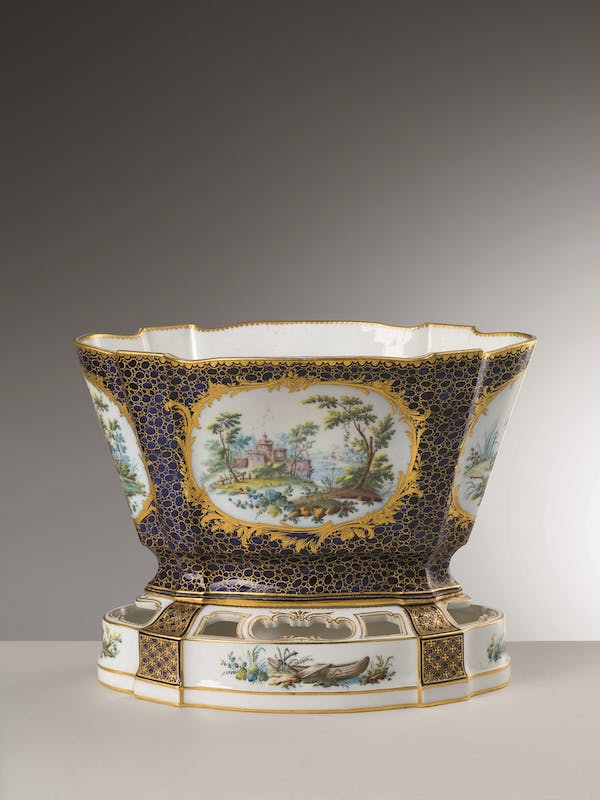 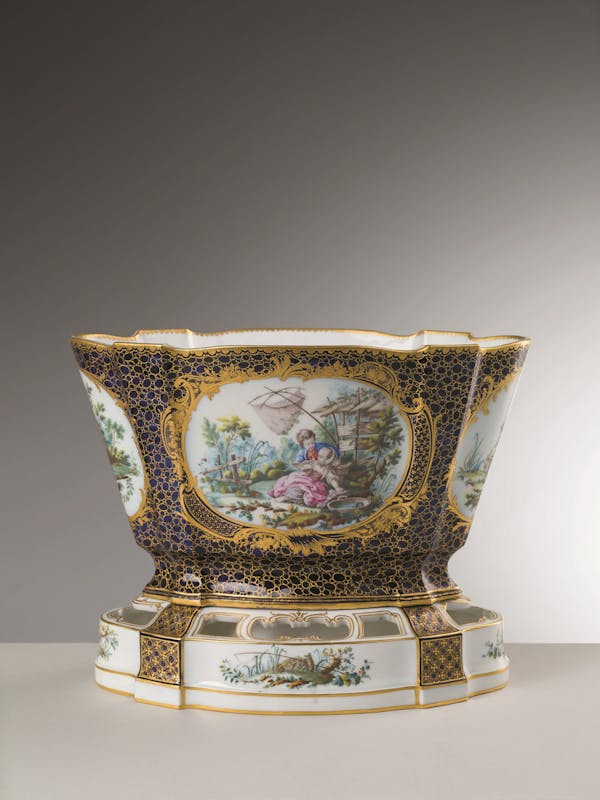 Crossed “L” or royal monogram with date letter “E” in blue underglaze, attributable to the year 1757

Initials of the painter André-Vincent Vieillard

The specimen consists of two parts: a flower vase and a basin serving as a foot for the vase itself. The latter is characterised by a dark blue background called “lapis”, which covers the outer surface, enhancing the whiteness of the porcelain visible both inside the vase and on the basin, whose decoration is enriched by gold threading framing elements alluding to fishing, immersed in the vegetation, evidently recalling the main scene inscribed in a cartouche on the body of the vase. It is a reproposal, albeit with variations, of La pêche painted by François Boucher and known at the factory through an engraving by Jean-Baptiste Le Prince. The Manufactory of Vincennes first, and later that of Sèvres, showed particular attention to the compositions of the French painter Boucher, as is also revealed by some biscuit figurines used for the decoration of dessert tables, examples of which can be found in the Porcelain Museum (inv. A.c.e. 1911 nos. 1404, 1406, 1412-1415, 1651-1652).

This vase model is described in the inventories of the Sèvres Manufactory as: “Vase Hollandais”, for its similarity to the majolica flower vases made in Holland. As early as 1754 it was made in two sizes, to which a third was added in 1758. The different sizes suggest a use of this type of vase as a “mantle garniture”, with the largest specimen in the centre and the others arranged to the sides of it in decreasing size. This is also confirmed by the choice of decorative motif developed on the surface of the vase. Referred to as “bleu lapis caillouté”, it was made at the factory after 1755, but by 1758 it was already being used on pottery destined for mantelpieces. It derives its name caillouté (cobblestones) from the visual effect of the gold decoration reminiscent of the shape of pebbles, a similarity probably suggested by the scientific attention of that period towards mineralogy, in particular of Dezallier d’Angerville’s treatise L’Histoire naturelle printed in 1755.

We can assume that our vase belonged to a series of three specimens that the Parisian merchant Simon-Philippe Poirier bought from the Sèvres Manufactory in December 1758 for the Duchess of Parma Louise Elisabeth, daughter of Louis XV. It is therefore possible to assume that the “mantlepiece garniture” arrived in Florence in 1868, together with other goods from the residences of the Bourbon-Parma dukes. However, this set is not described in the inventories kept in the Parma State Archives and the invoice for its purchase has not been traced either. Nevertheless, we do know that it was transferred from Florence to Rome to return on 25 August 1893, together with other goods sent to Rome in the post-unification era. The other two vases that made up the set are most likely to be identified with those in the Bearsted collection.