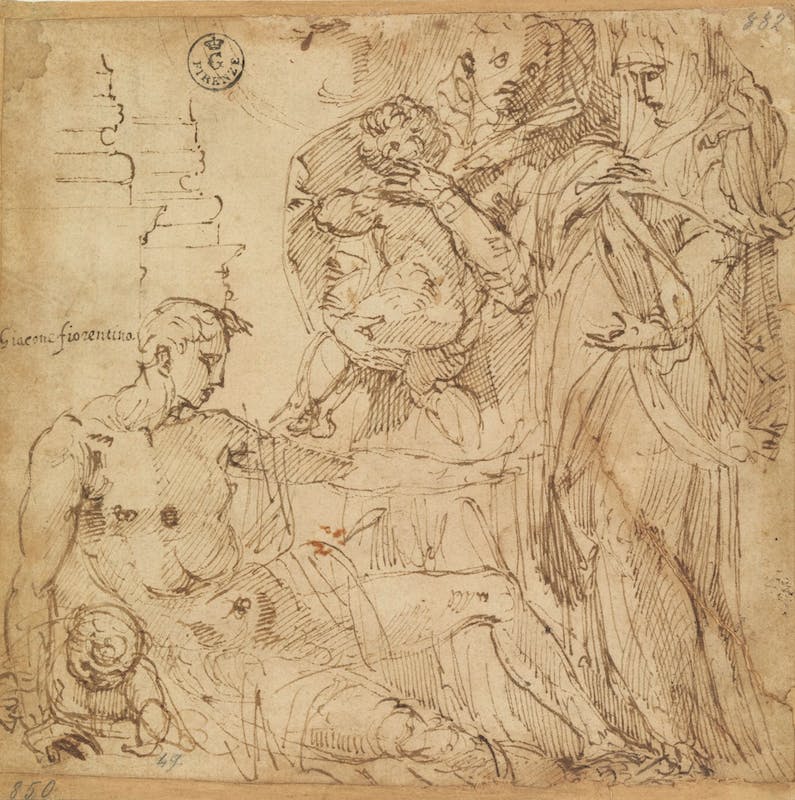 The Group of figures being examined and the Young man, standing, full length with book, a sheet in red chalk, also in the Uffizi (inv. 344 F) are both essential parts of the reconstruction of the body of works by Jacone, a Florentine artist who did not enjoy great success as a painter while, according to Giorgio Vasari, he was considered a skilled draughtsman.

The ancient inscription, in which it is possible to recognise the probable handwriting of Filippo Baldinucci, assigns them to “Giacone”; making it possible to identify them with the two sheets of the artist mentioned generically in the famous  Listra of drawings owned by Cardinal Leopoldo de’ Medici, compiled by Baldinucci in 1673 and updated in 1675. The two drawings stand out for their use of pen in quick strokes and red chalk, which is more finished and studied. Most of the other sheets of work in pen seem to interpret or develop the style of the Group of figures, showing a freer, less orderly stroke that culminates in the darting synthesis and nervy signs, preferring two-dimensional effects. The sheet also has some physiognomic idiosyncrasies, from pathetic to delusional, betraying the possible influences of Andrea del Sarto and Pontormo, the same who, according to Vasari were fostering the talents of Jacone. The profiles of the background columns behind the seated man reveal knowledge of  the recurring motifs used by Michelangelo in San Lorenzo, elements that highlight his links with the artist. These have often been stressed by critics, both with regard to the leaf shapes drawn in pen and to his possible acquaintance with Michelangelo, perhaps thanks to the mediation of Aristotile da Sangallo and goldsmith, Piloto.