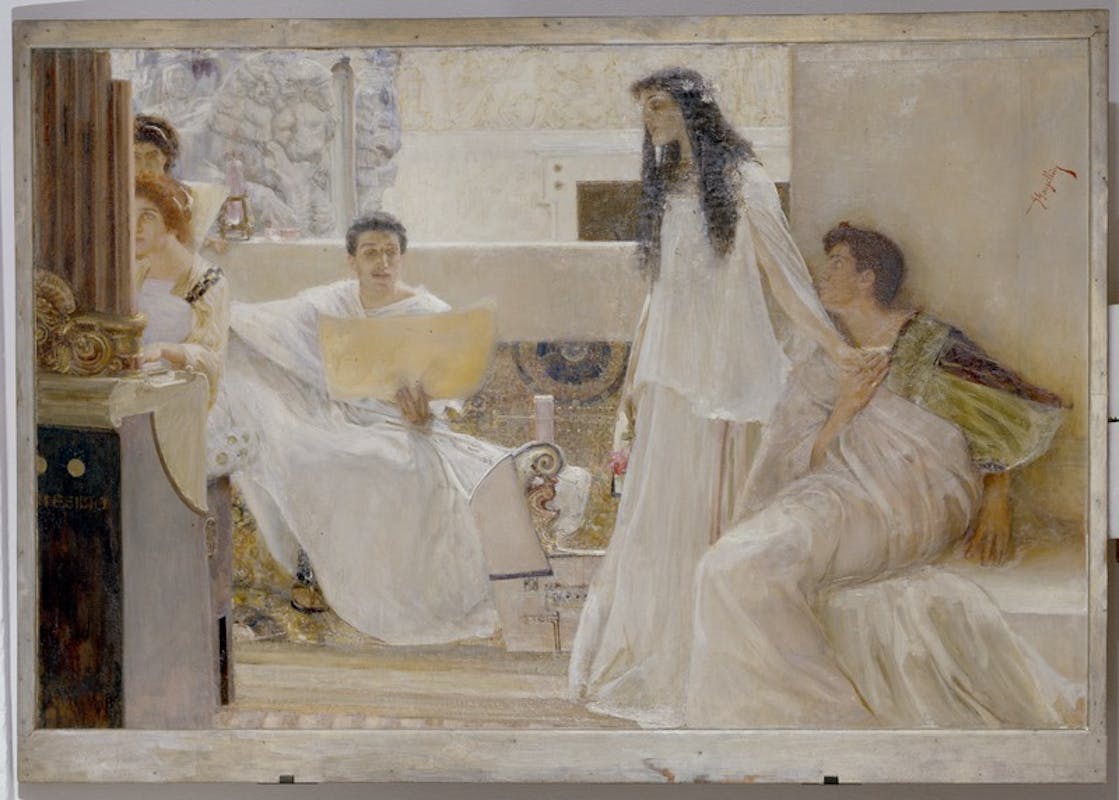 Eterno Idioma belongs to a series of paintings most of which can be dated to between 1895 and 1899, with which Bargellini experimented with the very fashionable genre of idylls, that is, idealised views and scenes of quiet serenity. In his case, these were presented with a Neo-Pompeian style that recalls that of the Dutch painter, Sir Lawrence Alma-Tadema, who was later naturalised as a British citizen. Beyond this obvious, confirmed reference, the panorama of influences present in these paintings is varied and extensive. In fact, the series of the Idylls started from the mid-90s in the circle of the Hautmann Gallery of Florence, disseminator of the rising star Gustav Klimt and the Vienna Secession. An Idyll also marked the artist's debut at the Festa dell'Arte e dei Fiori, the Florentine exhibition held in 1896 that gathered the international artistic research of the Symbolist and Pre-Raphaelite field, also hosting, among others, Alma-Tadema himself, Burne Jones, Khnopff or its precursor William Blake. These influences would be further enriched by the time Bargellini spent with other Italian artists such as Cesare Maccari and Francesco Paolo Michetti after his move to Rome in 1896. In fact, Eterno Idioma testifies to the artist’s personal reformulation of the historical-ancient genre, to which he is led by these experiences. In doing so, he adds to these two basic components, the use of the archaeological subject and the transposition of the same in an imaginative key, allegorical and idealising elements that draw on the symbolist perspective. He was certainly guided by his precocious knowledge of Klimt, but perhaps also by the evocative power of the verses of Giovanni Pascoli who revisited the classical myths with the sensitivity of the modern man in the magazine "Convito". The atmosphere of Eterno Idioma is in fact rarefied, thanks to the dominant shade of white that blurs everything in a metaphysical and dreamy atmosphere. The absolute protagonist of the scene is the artist himself, who depicts himself twice: the first time, on the right, holding the hand of his inspiring muse; the second time, on the left, as he sings verses, accompanied by a young girl playing an organ. As in the whole series of the Idylls, the amorous scene alludes to the symbiosis between the artist and the creative inspiration that presides not only over painting, but also over singing and poetry.

According to a usual practice, Bargellini adds a varied repertoire of quotations from antiquity to the scene, including classical architecture, Assyrian reliefs, Greek epigraphs and Roman costumes. But there are also some elements taken directly from the paintings of Alma-Tadema, of which the artist had many printed reproductions, such as the inscription in the middle at the bottom, reading ΑΤΘΙS (probably a reference to Sappho's pupil Attis) and the alabaster lamp (perhaps inspired by a finding from the excavations of Pompeii).

Eterno Idioma, already known of from several Alinari photographs, was purchased for the collections of the Gallery of Modern Art in 2006.