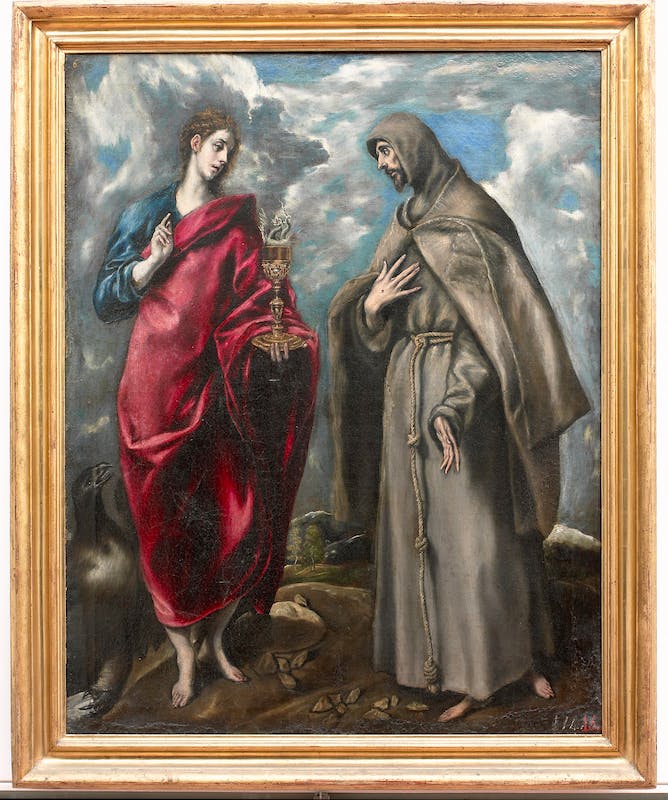 Dominikos Theotokopulus, nicknamed El Greco due to his Cretan origins, carried out his apprenticeship in his birth land. In 1566 he moved to Venice, where he had the opportunity to become familiar with the works of Titian and Tintoretto. He was particularly influenced by the latter, whose intense, dramatic painting made a deep impression on him. Four years later he arrived in Rome, where he studied the artistic path of the major Mannerist painters. Finally, in 1577 he moved to Toledo, where he remained until his death.

Starting from his experience of Italian painting, El Greco developed an intensely subjective style, based on the primacy of the imagination: from Tintoretto he inherited a sense of movement and dramatic use of light, from Titian he learned the expressive use of colour, from the Mannerist artists his wavy, elongated lines. The result was a tormented, tragic painting style, charged with intense emotions and at times so visionary that he became one of the masters who would inspire Expressionism.

The painting was purchased by the Uffizi in 1976 as the Gallery did not own any works by this artist, considered one of the most important Spanish painters of all time.

The two saints, with their elongated bodies and suffering faces, loom large in the foreground, set against a sky full of lead grey clouds. St John is holding a golden chalice from which a winged dragon is emerging. This detail is a rare iconography referring to an episode in the saint’s life related in Jacopo Varagine’s Golden Legend. It relates that the priest of the temple of Diana in Ephesus asked John to show the power of his Christian faith by drinking from a cup of poison. To demonstrate its effects, the priest had two prisoners drink from the chalice first, both of whom died on the spot. Not only was John immune to the effects of the poison but, after drinking it, he also resuscitated the two dead prisoners. The depiction of the chalice and the dragon became the symbol of the contraposition between the Church and Satan, a theme particularly dear to the Catholic Counter-reformation, which was intent on fighting protestant heresy in those years. Indeed, the paintings of El Greco’s mature production, including this one, show his growing tendency to be influenced by the intensely religious climate in Spain at that time. The work is charged with a dramatic, visionary mood designed to arouse a strong spiritual turmoil in the beholder.

Francesco, Brother of the Universe