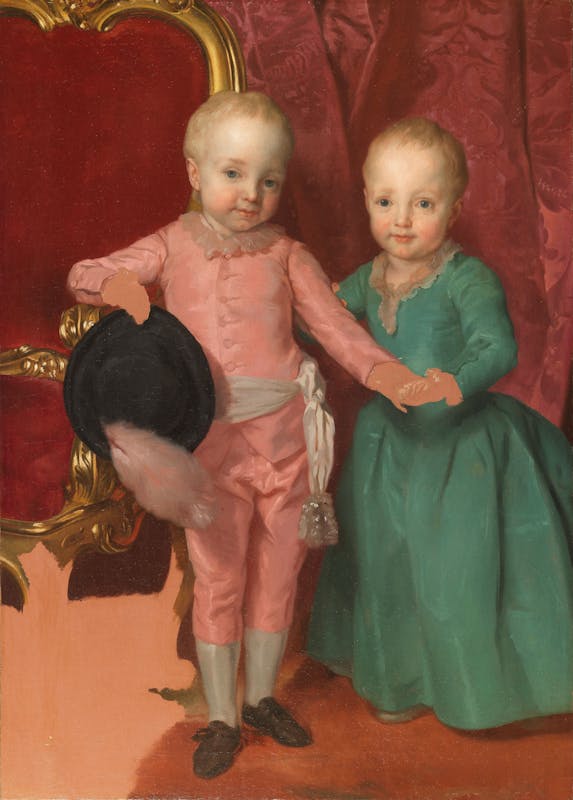 On display at the exhibition: The King of Spain's Grandchildren (Pitti Palace, Palatina Gallery)

Praised as one of the most important exponents of international Neoclassicism, the painter here brings together the two younger sons of the Grand Duke of Tuscany Peter Leopold of Habsburg-Lorraine. The two children’s identity may be inferred from a comparison with a painting by Mengs at the Prado Museum and two preparatory life drawings where the archdukes are portrayed half-length.

As First Chamber Painter of the King of Spain Charles III of Bourbon, Mengs had the opportunity to immortalize the two children when he was allowed to come back to Italy to take care of his health on condition that he went to Florence to portray the Grand Duke’s family (related to Charles III by the marriage of his daughter Maria Luisa with Peter Leopold).

During his Florentine sojourn (from June 1770 to January 1771), before leaving for Rome, the Bohemian painter succeeded in realizing all of the five commissioned portraits. And he sent them to the court of Madrid, where they are still preserved. The series included the two portraits of the Grand Duke and the Grand Duchess, and those of the first daughter Maria Theresa (1767 – 1827) and Francis (1768 – 1835), first son and heir to the Imperial throne, who both had the honour to be portrayed separately. On the contrary, maybe for a lack of time, the painter chose to depict Ferdinand and Maria Anna together in a double portrait.

Here the Habsburg-Lorraine archduchess is portrayed in a pose which is objectively impossible for a 10-month baby, realistically incapable of standing on her own feet by herself. Also to correct this incongruity Mengs left this first version unfinished, and replaced it with the Prado’s final version. Yet, though unfinished, the painting is noteworthy for its extraordinary modern composition, its descriptive unaffectedness, the natural poses of the sitters and its beautiful explosive palette; all qualities which are no longer distinguishable in the Madrid final version curbed by the rules of court ceremony and the formal dress codes the Infants had to respect.

The portrait was not included in Mengs’s bequest. It was probably given to his daughter Mary Catherine Gertrude by Mengs himself before dying. Such a hypothesis would be confirmed by the provenance of the painting from the Marches in Italy, where in 1778 Catherine married Antonio de Angelis da Ancarano.

Recently recognized by Stefano Grandesso, the painting was recommended by him to Steffi Roettgen and then purchased by Carlo Virgilio Gallery in Rome, from whom it was acquired by the Uffizi Galleries in 2016.