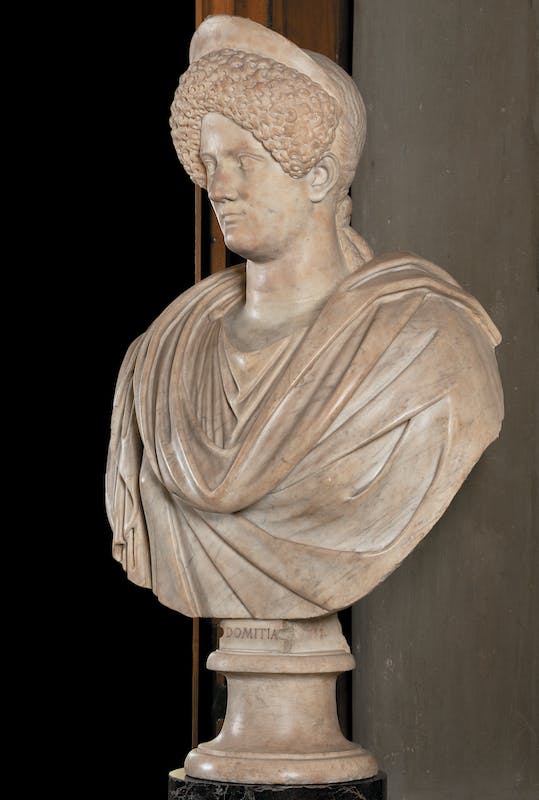 The face of empress Domitia Longina (51/55-post 126 AD), set on a modern draped bust in Italian marble, is recognizable for its particular physiognomic characteristics, such as the elongated, almond-shaped eyes, aquiline nose, and plump lips. The elegant honeycomb pattern hairstyle, arranged higher up on the forehead than in the portraits of the subject as a young woman, and the presence of the diadem allow us to relate the effigy to the type of portraiture created in the years when her husband, Prince Domitian (81-96 AD), rose to power and Domitia was appointed Augusta.

The dating of the portrait to the period when Hadrian was in power confirms the important position that Domitia continued to hold, even after her husband’s murder, in the conspiracy she may have taken part in, which had brought the new dynasty to power. The matron was not, moreover, new to dramatic reversals of her status. Having played a key role in official propaganda since her marriage to Domitian - to whom she had given an heir, even if he had died in early childhood - in the early years of her husband’s reign, she had been removed from the court and accused of adultery. This was a common claim against women of power who had become dangerous, and emphasized by the ancient sources that saw in her one of the symbolic figures of Domitian’s despotism. However, her own personal prestige, also due to her family ancestry, meant that Domitia was soon called back to the princeps’ side, with all the honors due to one who could be celebrated both as the mother of a deified son and as Augusta, a title she would continue to use even after the end of the Flavian dynasty.

The nose and low braided ponytail are the results of modern restoration works. The ponytail in particular was typical of Domitia's youthful portraits and incongruent with this type of portrait, in which it was replaced by a chignon.