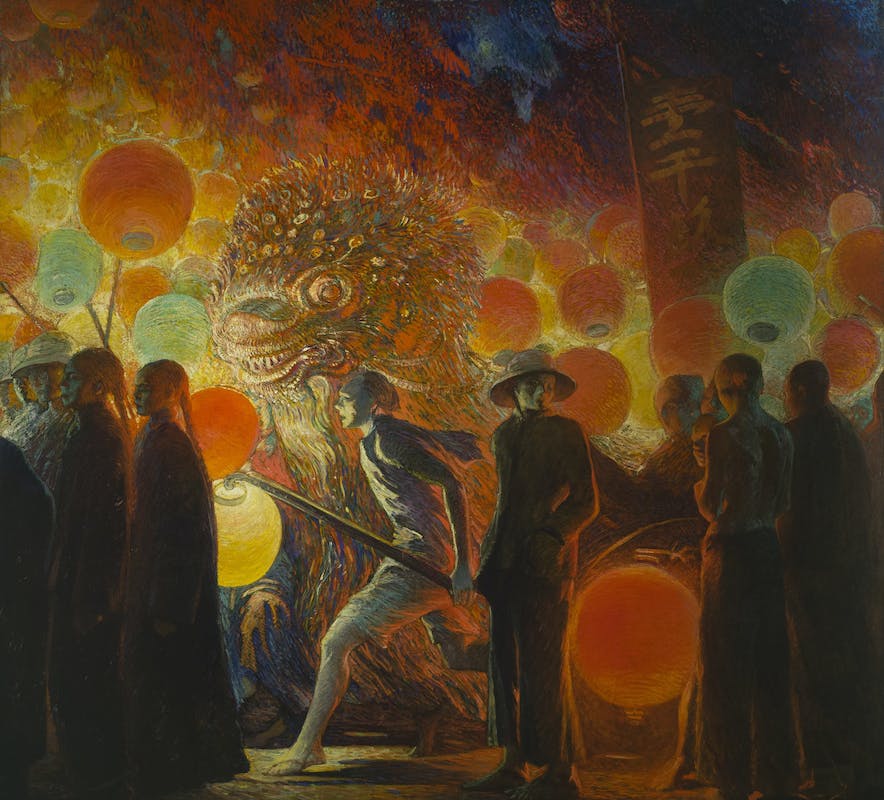 In 1910, Galileo Chini, multifaceted, leading light of the Art Nouveau movement, was commissioned by Rama V, King of Siam, to decorate some of the rooms in the Throne Hall in Bangkok, which had been built by Italian architects and engineers. During a trip to Italy, the king had admired Chini’s decorations at the Venice Biennale and he employed the painter in Bangkok from 1911 to 1913. Chini, who was already fascinated by the ideas of oriental art, was completely at ease in this visual culture. The king had also appreciated the sparkling universe of colours that, in line with the secessionist taste, perfectly summed up the shape and colour, and adapted well to the precious inlays and luxurious marble decorations in the royal palace.

On his return from Siam, Chini showed this painting at the 1914 Biennale, proof of and homage to the fertile period spent in Bangkok. The square shape, so popular - among others - with the Viennese Secession and to Klimt himself, the processional sequence of figures, from right to left, shown in a powerful backlight, suggests the space in which the scene is set, without describing it in perspective terms, in line with the highly decorative value of Oriental art and Art Nouveau. The typical ball-shaped lanterns that light up the night sky, and the characteristic paper maché dragon fill the background. Chini was able to revive the composition further, using the pointillist painting technique - dots and commas in colour, which allows him to move his brushes sinuously, in an enveloping manner that made him reproduce the rejoicing and exuberance