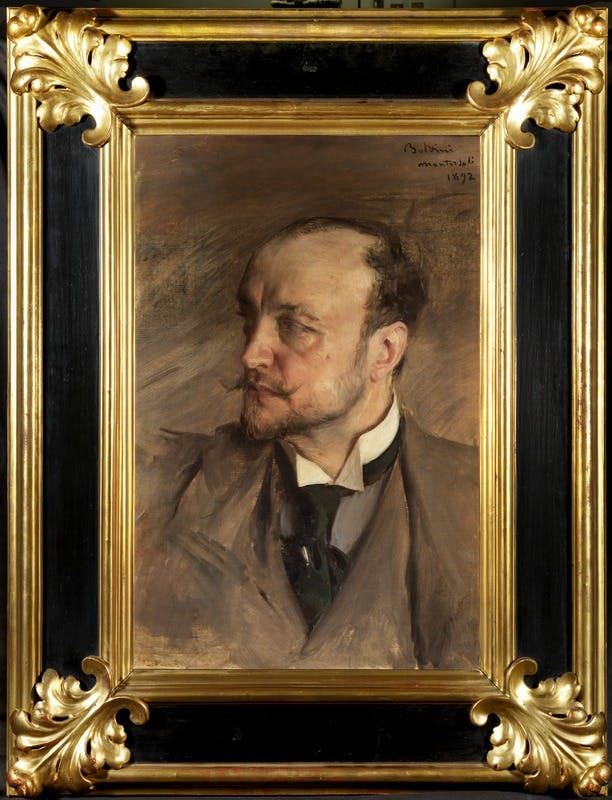 At the time of this self-portrait, Giovanni Boldini was in his early fifties, and at the height of his success as a portrait artist for the Parisian high society. The fact that the artist specified the year (1892) and the place of painting (the villa of his painter friend Cristiano Banti in Montorsoli near Castelfiorentino) on the top right of the work, together with his signature, is a clear sign of his desire to link the painting to a period of time and to acquaintances that were particularly dear to him. In February 1892, having complied with the request made by the then-director of the Uffizi, Enrico Ridolfi to donate his self-portrait to the prestigious collection of the Florentine gallery, Boldini, a seasoned traveller, indeed followed Banti’s suggestion to leave aside his Parisian commitments, and planned to paint the work directly in Tuscany, in three or four sittings. And this is what happened, probably during his stay there between September and October of that same year. A photograph of the period, unfortunately not dated, shows evidence of the painting following its completion, while still on the easel and already in the gold and ebony frame with which it would enter the Uffizi, definitely by November of that year. In fact, at the beginning of that month, Boldini wrote to Banti, complaining about the out-of-the-way location of his self-portrait within the museum compared to “that storm of a portrait by that Swede”, thought to be a reference to the canvas by Anders Leonard Zorn.

When the self-portrait arrived at the Uffizi, Boldini also submitted a request: again through Banti, he asked the director many times to send him the much-yearned for cast of the Bust of Cardinal Leopoldo, at the time attributed to Lorenzo Bernini and located then, as it is today, in the Antiricetto of the museum. The great insistence with which he requested it was proportional to the central role that the cast, which he received in 1893, would play in his production, elevated to become the protagonist of a series of at least five paintings set in the artist’s Parisian studio, where it sits triumphantly on the fireplace or on a table, with such a lifelike gaze and twist of the neck that it looked like a human, dialoguing with the characters depicted in the portraits hanging on the walls.

The Self-Portrait of Montorsoli can be linked to another three variants painted in the same period: one preserved in the Boldini Museum of Ferrara, and another two that arrived at the Gallery of Modern Art in Florence as part of the legacy of Alaide Banti, Cristiano’s daughter. While in the Self-portrait of Montorsoli Boldini depicts himself in three-quarter view, blending his figure into the background in the style of Velázquez, discovered live in Madrid a few years earlier, in one of the two canvases in Palazzo Pitti he stares at the spectator with an impenetrable expression, further underlining the transfiguration of his real image into that of a powerful demiurge, capable of capturing the essence of the men and women of his time.